Elodie Ternaux: Tell me a story!

Being enthusiastic about, surprised and seduced by, let's say, objects that are produced and available to me (but we could extend this assertion to architecture as well as food and a lot of other things, I guess) is becoming more and more difficult, as few of them actually express genuine quality and thoughtful design. 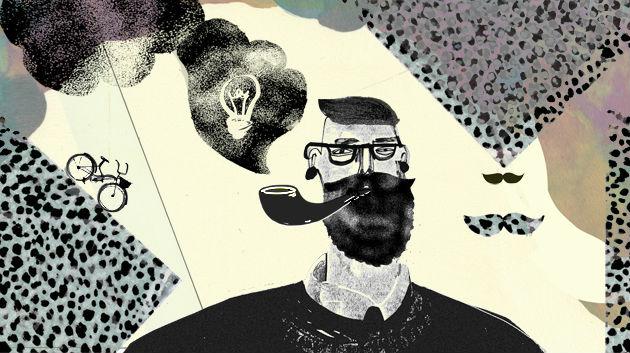 Is it a question of age - not being as young as I used to be equals 'been there, seen that' - or am I a real marker of a change in our society in the sense that we are starting to rebel against soulless industrial consumer goods and unrestrained production? Are we looking for a re-injection of sense into things and, to an extent, into our lives?

Let's admit that I am not that old and that there is a real shift in action there, in which designers do have a paramount role to play, designing well-thought things which we will connect with. Especially driven by sustainable concerns, mankind has started to wake up and yearn for more humanity in all things. More and more clients appreciate knowing where things come from, if they were actually made using local resources and whether the piece is unique instead of a part of large series their neighbours will also enjoy. 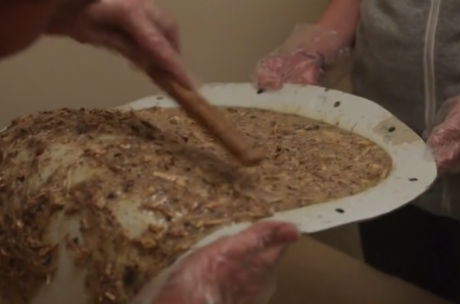 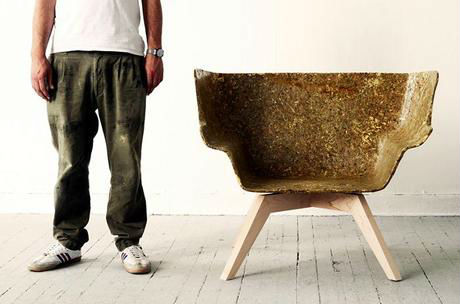 Spyros Kizis has developed a biological alternative to plastic — the biodegradable composite is a mixture of the Artichoke Thistle plant and a bio-based resin, mainly made from waste cooking oil.

In this context we witness emerging, or more accurately re-emerging deep appreciation for the love and care craftsmen give to their work. The whole 'tribe' of creative professionals appears, the 'designers makers', fond of designing as well as making. They all share this will to control the making process in house and regardless of using 3D printing machines or a hammer, the idea is to make, make good, make well and at some point, to give the opportunity to 'make' to everyone.

It may seem paradoxical - but who is to say things are simple and logical all the time! - that existing in a world where digital matter has become almost unavoidable actual-real-physical things made out of actual-real-physical materials could regain importance. One could have expected that our society would turn into an immaterial one, obsessed by intangible goods and virtual relationships but even if this aspect has tremendously grown in our lives and monopolized lots of our time, we have never craved more attention, real contacts with fellow creatures and actual exchanges with people and by extension, objects as well. Hence the present success of homemade stuff, bespoke objects which are beautifully crafted, which will accompany you in your life journey and will be given to your descendants.

It looks that one of the best recipes nowadays to be identified as a typical 'designer maker' is : 1. to wear a beard and checked flannel shirts enhancing your lumberjack torso; 2. to eat organic food; 3. to ride a bike to work; 4. to defend progressive political opinions. Let's not indulge the hipster caricature too much although, as such, it may hold some truth and stress the fact that we are right now discussing facts involving a quite restricted part of the world population... making the point quite moot in regard to the real problems our world is facing but... hey, I do live in this elitist group even though I do not wear a beard - or not a long one - so what else could I discuss knowingly... and we do have to start somewhere, somehow and actually witnessing what may look like a fringe of the world population - but one at that who is supposed to be at the entire service of consumption as industrial designers are actually taught to be - defending more humanistic values can be taken as a marker of change, I believe.

And there is a real appearance of projects involving the making as well as the designing. Of course, when you actually 'make' things, you have to deal with materials and they are capital to each project's success, but it seems that materials have taken second place on the podium when the making, the manufacturing process, shines at the top.

Upcycled lamps made out of plastic in a simpel and naive process, made by designer Nikolaj Steenfatt Thomsen.

Nowadays, the 'how it has been made' has become more important than 'in what it is made', even though, yes, both are intricately linked. A genuine 'designer maker' will therefore document precisely the ´how´ with supporting evidence in the form of pictures and films showing the successive steps of the making process to enhance their expertise, to underline the experimental aspect of their work and to emphasize the bespoke side of their production... as well as to share knowledge and expertise as, yes, there is also genuine generosity and mutual assistance.

Chosen materials are often products of recycling, probably because they are local, affordable and can be easily sourced and transformed, but also because they are a part of making a stand, showing that beautiful and well-made is not always associated with luxury and high cost, but with real expertise... what craftsmen have known for long all over the world, by the way. Nikolaj Steefatt melts plastic shreds recycled from various containers or mixes food leftovers, coffee grounds and wood dust; Spyros Kizis plays with artichoke thistle fibres; Adital Ela compresses earth and natural fibres... to create objects... i.e. inescapable chairs and lamps, of course but again... that's a start! 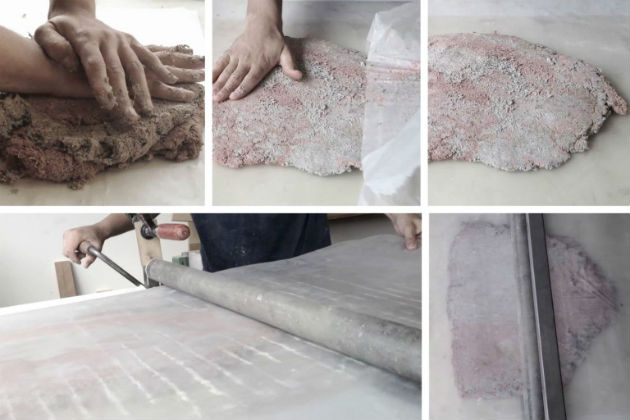 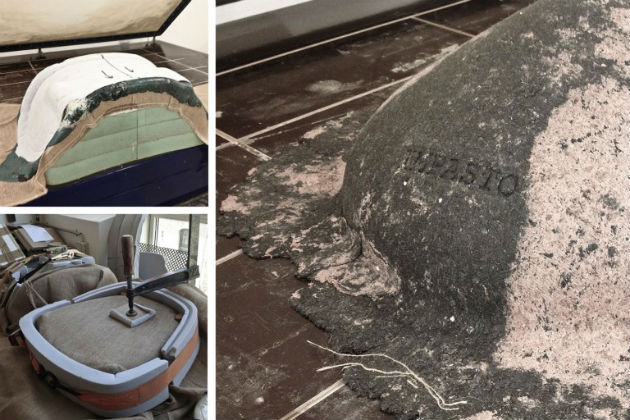 Impasto is a biodegradable natural fiber composite made out of leftovers from wood, coffee and skin production, invented by Nikolaj Steenfatt Thomsen. 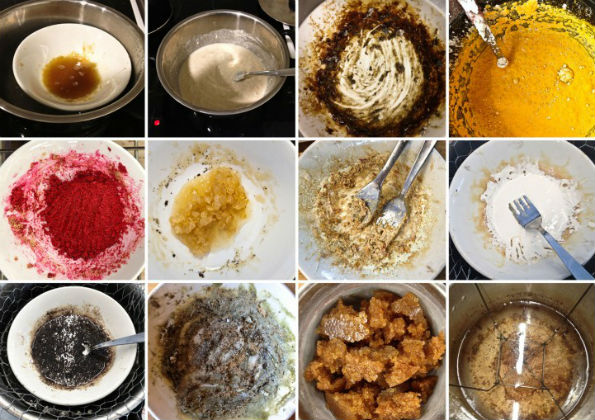 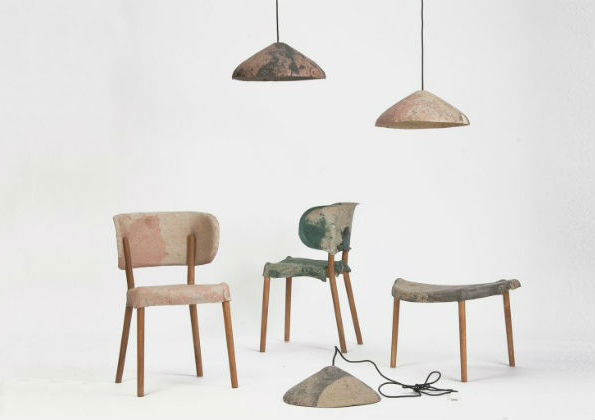 The "hand made/high tech" process makes every piece in the collection unique.

Our so-called virtual world has provided us with a new way to be directly in contact with these makers, sometimes even getting rid of middlemen and their price margins. Numerous designers makers, craftsmen and artists can now be contacted via their websites or Facebook pages. It has become easy to discover and follow their work, to discuss directly with them and order a piece to your liking, crafted carefully to match your desires. And the interactions are surprisingly simple... just as if these virtual exchanges existed in a parallel world where politeness and friendliness are the rule, where hierarchy is not enforced. Isn't it the world we should be living at all the time after all as here there is connection and emotion, there is soul.

If this 'slow design' movement happens to settle down there may be hope to re-enchant our world by, at least, bringing pleasure and quality appreciation of materials, shapes, crafts. Of course, it starts by education and showing the little ones that things made with love and care mean a lot. Everything comes back to these early years when kids get to discover the world and if we do not provide the right lenses to actually see things in a more conscious and attentive way, we will never reach enough souls to actually witness a real shift and finally end up living in a world where each object has been well designed, is therefore durable and tells us stories. 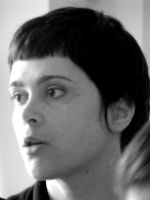 Both engineer and industrial designer, Elodie Ternaux is co-manager of matériO Paris, a material library dedicated to innovative « matters». She gives lectures around the world, curates exhibitions and is the author of several books, among which ‘Materiology, The Creative Industry's Guide To Materials And Technologies’ and ‘Industry of Nature, Another Approach to Ecology’.