No cracks in the highest glass ceiling

TU Delft (Delft University of Technology) is a public technology university located in the Dutch city of Delft – the birthplace of 17th century painter Jan Vermeer. The university has developed a new cast glass known as “Re3 Glass”, designed to be “Recyclable, Reducible and Reusable”. The glass blocks are intended to serve as load-bearing building materials, and can be utilised in partitions, facades, columns, and even as furniture components.   Re3 Glass was developed by Faidra Oikonomopoulou and Telesilla Bristogianni of the university’s Architecture and the Built Environment, and Civil Engineering and Geosciences faculties. Their aim is to produce glass building materials exceeding existing load and stress limits for architectural flat glass. 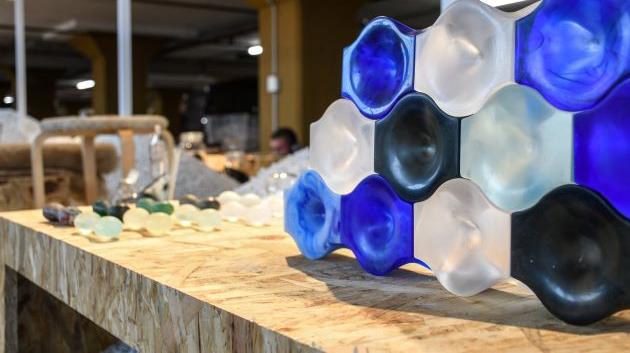 In recent decades, the worlds of glass and architecture have increasingly been merging into a kind of symbiotic relationship. For the most part, modern architecture utilises glass for its transparent properties. But more daring works have also demonstrated that thanks to the impressive compressive strength properties of glass (its ability to withstand pressure) it can also be used as a load-bearing material.

One well-known example of glass being utilised as a central load-bearing material is the facade of Crystal Houses in Amsterdam. The glass-fronted townhouse, which today houses a major retail store, is the result of collaboration by MVRDV and Gietermans & Van Dijk, the TU Delft Glass & Transparency Group.  Traditional fired bricks, installed from the top of the building down, are gradually supplemented on the facade’s first storey with hand cast glass bricks.

A unique system of Re3 Glass circular geometrical building blocks was unveiled at the Sketch the Change! conference by co-designer Telesilla Bristogianni. Held in Prague in June 2019, the conference, organised by the matériO Prague materials library, cast light on circular economy principles in the fields of art and design (photo: Sam Rentmeester)


The utilisation of glass in architecture is usually limited by the inherent possibilities of so-called “float glass” (standard sheet glass used for windows). Other common architectural uses include stained glass and glass blocks – the latter being special cube-like bricks with an air-filled interior. But now Re3 Glass bricks are also being added into this mix of options. Indeed, such bricks can be viewed as cousins of the long-established aforementioned glass blocks.

However, in comparison with the above, Re3 Glass can be utilised is a variety of ways, and even removed and reused in the future. Glass blocks (known as “luxfery” in Czech) must be joined with mortar, meaning that they are contaminated with respect to future alternative uses. Furthermore, their relatively thin walls mean that they cannot serve as true load-bearing bricks. However, in terms of thermal insulation, old-fashioned glass blocks outperform Re3 Glass. “More research is needed to improve the thermal insulation properties of our panels. One such way is to combine our bricks with a thin layer of photovoltaic film with the aim of collecting energy for the purposes of both heating and cooling. Other concepts centre on the porosity of glass as a material,” notes Faidra Oikonomopoulou.

The large variety of glass fragments used in the production process offers the designers the opportunity of a wide array of aesthetic choices. “If we use glass that is crushed into a powder, then we end up with a dense foam-like glass. If we use larger shards, then this creates wisps of colour within the final product. There is a wide range of possibilities, and the more we experiment, the more opportunities emerge,” notes Telesilla Bristogianni (photo: Telesilla Bristogianni)

Another advantage of such cast glass components is the fact that they offer a dynamic alternative to the standardised aesthetic imposed by “two-dimensional” float glass panels, offering an entire third dimension to explore. Specific shapes can be built up into complex structures, with individual components interlocking into a unified whole. Unlike the 2016 Crystal Houses project, in which glass bricks were connected with a transparent acrylate UV binding agent, the Re3 Glass system seeks to avoid such forms of adhesive mortars.

Such a design strategy stems from the pursuit of circular economy principles. Accordingly, at the end of its lifecycle, the authors claim, the material can be easily dismantled and reused. “In order to avoid high stresses during such a procedure, we are placing a layer of rubber material between the bricks. We create seals along all the internal joints with the aid of weak elastic putty, which can easily be removed at the end of the structure’s lifespan. Such internal sealing is highly important in order to prevent the penetration of water, dirt, algae and other contaminants into the interior space of the facade.” The rubber also enables the mitigation of the effect of minor thermal expansiveness deviations among the various types of recycled glass used in such walls. Facades made from Re3 Glass components are held together simply by their own geometry and an external compressive frame, and make full use of the compressive strength of glass. Which means that no additional metal or other load-bearing struts are required in between the bricks. The transparency of such structures, enabling a view of the internal structures that bring stability to such walls, can also serve to offer an additional aesthetic value.


In terms of fulfilling circular economy principles, Oikonomopoulou and Bristogianni have used types of glass that are not commonly recycled. During the creation of prototypes, the pair re-purpose waste transparent glass panes with coatings, television screens, borosilicate laboratory or kitchenware glass and even decorative lead glass. “Such types of glass are not systematically recycled. Because their composition is not compatible with most forms of commonly recycled glass (meaning chiefly container glass, such as bottles and jars used to store food and drink), or because they are contaminated with coatings and/or adhesives. It is surprising just how much quality material is discarded,” say Bristogianni and Oikonomopoulou.

Even the toughest bricks have drawbacks

Uncertainty over the precise composition of glass batch can also affect future production – maintaining a consistent and regular supply of the desired volume of a particular desired mix remains a challenge. In the event of mass or standardised production, it appears questionable whether the crucial circular economy component of Re3 Glass can be entirely preserved.

However, the current production methodology could prove effective for the production of limited edition and custom-produced series of glass building materials, including ones which utilise localised glass waste sources. It is possible that a kind of “recipe” could be created, in which localised glass waste could be repurposed into new specific custom building components via the use of so-called pot furnaces. These could offer various architectural solutions including for facades, interior partition walls, windows, arched vaults and small pillars. Localised waste processing could also contribute to a kind of architectural folklore. In a similar way to how folk architecture in the northern Bohemian town of Železný Brod is characterised by slate roofs and facades, a phenomenon could emerge of, for example, interior glass dividers made from recycled lead glass structural panels.

In seeking environmentally friendly solutions it is important to consider that the heat and mechanical processing of glass is a very high-energy-usage activity. However, in terms of electricity use, it is less costly to cast existing glass into a desired form than to mine raw materials and create entirely new glass. Which means that recycling is clearly a step in the right direction. At the same time, we know that glass cannot be endlessly melted down and re-cast without adding in fresh raw materials of the kind that are in part exhausted during each such process, and which help the glass itself to melt.

Single re-casting of what would otherwise be glass waste, as pursued by the Re3 Glass project, appears to offer considerable potential. As the team behind the glass continue their work, an assessment of the life cycle (an LCA – Life Cycle Assessment) will undoubtedly be of considerable interest, with the results leading to a possible greater acceptance in the world of architecture.