I´m into manual work.
The world of Lada Semecká

Whatever you concentrate on will grow under your hands. “My mind is a filter, that´s where my decisions come from,“ says Lada Semecká. Her thought and her talent help her create art through which she describes, in the most subtle way possible, „the everyday reality“. Is there anything more subtle than the long thin legs of an aquatic bug called hydrometra, moon rays, or sounds of cranes on rice fields? We made this interview at the occasion of Lada Semecká´s exhibition called Introverze/Introversion at the Kuzebauch Gallery (2016). 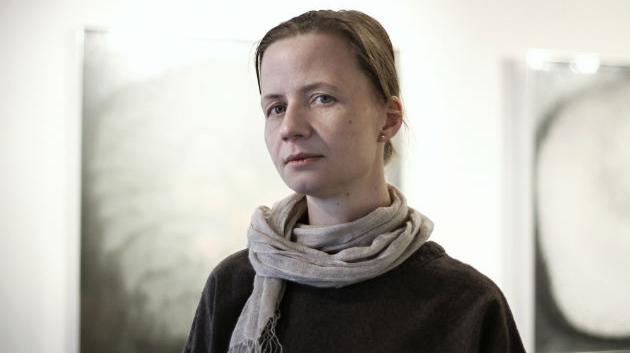 Even though one would expect that artists and especially glass makers would be skilful, it took me by surprise when you described yourself as a “manually skilled” person. You said that you prefer making things over talking about them. If I wasn’t there for some of your lectures, I´d probably be afraid that this interview may be rather complicated. Why is it so difficult for you to comment your work?
Maybe I feel that people tend to talk too much. They keep talking instead of making, and I’m talking about making, not “producing”. I reckon that I belong to those people who prefer artistic expression over linguistic one. By talking and writing, you express yourself differently from creating. Those who prefer talking often run into a language barrier. Language is an interesting phenomenon as it divides people into national as well as professional groups.

You can come to understand others when reading between the lines but also looking at their art. It just came to my mind that things you say out loud will change over time, you perception changes but words remain. I don´t know whether words are enough for me to express correctly what is between the lines, all that transience. I´m just not that strong in expressing myself orally. I´m no poet and, definitely, I´m no expert who is convinced about her every word.
The fact that you prefer “manual” expression over verbal may have many reasons – from satisfying physical contact through “thinking with your hands” all the way to the moment when you start meditating over your work and you are confronted with memories, you feel inspired, get the right insight and understanding, etc. Is your intuition driven by a carefully orchestrated plan or do you just set your hands free?
I´m not a fan of formal planning. Of course, I follow a certain framework or, better say, I take a certain direction and see what comes out of it. When working, when interacting with a material, which becomes the platform for my ideas, I relax and time flows differently. The picture in front of my eyes keeps changing until I decide to stop the process. I stop the process when I feel it right.

I´ve heard you say that your landscapes are internal and dreamy, nothing defined. Your landscapes are like a medium for you through which you nourish your feelings and which you store your memories on. They are intimate and utterly personal. Isn´t there a danger that as such they will be rather incomprehensible to a viewer who needs stronger hints but mere resemblance of cloudy skies? Can an artist guarantee that his or her work will be comprehensible?
I don´t know whether an artist can guarantee anything. Can one guarantee anything? By every decision of ours, we gain and loose at the same time… People look at paintings and the world around them and interpret what they see. And either it resonates with the message conveyed or not. But even if it resonates with you, does it mean that you comprehend the message? I wonder whether there is a form on the planet Earth, which is comprehensible for everybody, every single person. Take the circle. Everybody can tell that a circle is a circle, but are we aware of all meanings behind such circle in all cultures? We all have our own interpretations and perceptions many of which will derive from what one can read about circles on the Internet.

Do you draw strength and inspiration from the everyday reality or do you feel that it distances you from your own self? What is the role of abstraction in your work?
The reality I see is an integral part of the world we perceive. Abstraction, on the other hand, functions as its explanation, rule, and a big question mark, which I feel behind this mosaic composed of interrelated phenomena. It's like a world which is both small and big, where even the smallest real element may attract all attention of the entire universe only to disappear there soon. I do not know whether this is clear…

In my engraved glass, I refer to real images as part of a much larger and complex picture of the world as we see and perceive it. I see a mosquito on a window sill and the Moon behind the window. The distance between me and these two pictures is enormous, but it is one picture and it is only up to me, on which I will focus my eye, what will pop up in my head and where I will turn my eye afterwards. When looking at the mosquito, I see the Moon, too, but many things bathing in moonlight stay hidden from me. To put it simply, they remain outside the centre of my attention until I decide, maybe unwillingly, to memorize them. Much of this process has remained undetected. My decisions are filtered through my mind. The empty space between the mosquito on the window and the night sky offers itself as the right space for questions and answers or the right environment to become aware of the rules which are better described by silence than words. 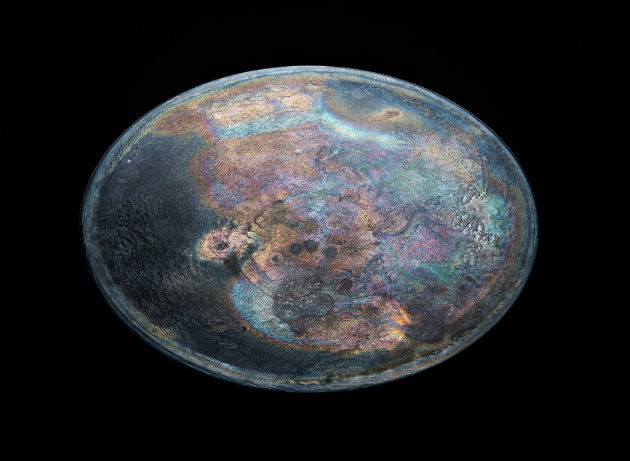 Considerations you´ve just raised are commonplace for every artist. Which ones are most important for you personally?
Hard to say… I guess what matters to me is how to start , how to proceed and whether this is where I should stop (laughing). Will the view of a mosquito with the moon at the background actually appeal to anyone, will anybody perceive it the way I do, and will anybody see anything behind it? I wish to express the roughness of the everyday reality as subtly as possible. Isn´t it so that I´m the only one to see this reality? Shall I strive to “deliver” and, if so, to whom? Does my work make sense? Does it all make sense to anybody? And then I remember Buddha´s words: „He who asks is mistaken, he who answers is mistaken, too.“ That´s the last nail in the coffin and I´m off to do gardening.

Professor Sylva Petrová, a connoisseur of contemporary glass art, claims that “the Czech glass artists assisted by true icons of Czech glassmaking will master any concept. But you don´t entrust your designs in anybody´s hands… is it because you can bring them to life yourself? What are the key reasons behind this?
It´s actually not true. Some of my projects require assistance. For example, I don´t blow glass. I perceive all kinds of vases, glasses and other containers in their historical context and, moreover, as objects having outer and inner characteristics, the same as walls which separate the outside from the inside and windows letting the light in.

In Japan, I cooperated with Peter Ivy, a glassmaker. We blew glass for me and I helped engrave his objects. He blew simple vessels for the everyday use. He used glass mass full of streaks and bubbles, similarly to our producers of historical glass. In Peter´s glass vessels, which he gave me to engrave, I kept discovering various streaks and bubbles, I found landscape vistas in the vessels he gave me for engraving, in which for instance, I would suddenly discover a mosquito, a memory revisited once again in the glass. I projected what I discovered in the Japanese landscape and in the garden into the thin irregular walls of the vessel.

The key reason for which I still make certain objects on my own is that I want to be there when they are born. I wanted the mosquito I´ve been talking about  to be as subtle as possible. I wouldn´t entrust this job into anybody´s hands. It is not about just mechanically reproducing the design, it is about a concentrated effort which leaves traces of my immediate mood and feelings in what I´m making at the moment.. 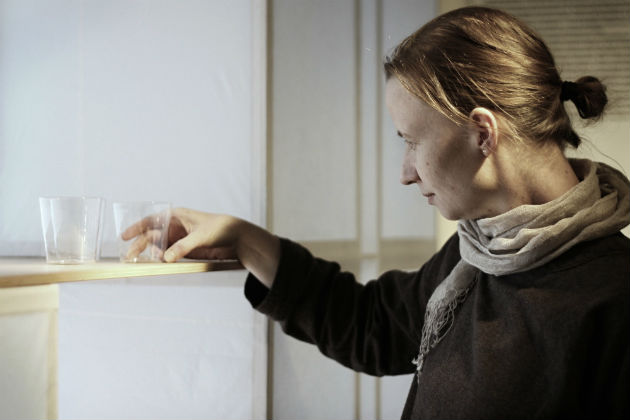 Your art results from original experiments. You play around with various techniques and it seems that glassmaking itself motivates you a lot. What is it that you need for an experiment to result in a piece of art, an artefact which is complete?
It´s entirely up to me. I just see it. It happens suddenly.

Some of your experiments, for example those with acoustic object, are inspired by the Japanese culture. What´s the difference between your experiences gained at Pilchuck Glass School in the USA and at Toyama City Institute of Glass Art in Japan?
I spent as little as two months in Pilchuck and I was struck by the nature of the American North West. First, I attended the Etsuko Nishi´s studio and later on I moved to the Artist in Residency to join other young artists, primarily Americans. That´s where I met Yasuko Miyazaki. We became friends and later on we met again in Japan. The Toyama Institute was a different type of school, it was not the Pilchuck style venue. It was like joining an extended family. Unlike the bohemian Pilchuck, Toyama was ruled by regulations and discipline. I spent four years in rural, traditional Japan living amongst local craftsmen and artists.
In Pilchuck, I admired cedar trees and their branches waving in the autumn wind while in Toyama, I experienced seasonal changes in nature, the Shishi mae spring festivals with the pipe and drums, singing frogs and cranes in the rice paddies, the din of cicadas and summer rain, the autumn full moon, chanting suzumushi ... heavy snow ... The language barrier and the fact that I couldn´t read Japanese probably made me more perceptive to sounds. You can´t imagine how many different sounds I stored in my memory! – I lost them on the way back home. In Japan, I enjoyed going to the temple to listen to bells. I admired the nature and traditional rural culture of Japan, I inhaled it and used it as a source of inspiration.


Lada Semecká studied glassmaking and engraving at the Secondary School of Glassmaking in Kamenický Šenov and later used her expertise when working as an engraver at the Carlsbad´s Moser factory. She continued studying at the Institute of Art and Culture in Ústí nad Labem (doc. Pavel Mizera) and later also at the Academy of Arts, Architecture and Design in Prague (prof. Vladimír Kopecký).  She also taught at both schools and currently she teaches at the J. E. Purkyně University in Ústí nad Labem.

In her life, Lada Semecká has always combined art with teaching. She´s been at the student/teacher position at several schools abroad. The most prestigious schools where she studied were in Riga and St. Petersburg and in the USA, where she attended the Pilchuck Glass School. She taught at the Toyama City Institute of Glass Art in Japan, attended many different glass symposia and travelled abroad as an artist in residence. Her last stay was again in Japan (Set). She´s exhibited her art at dozens of independent as well as group exhibitions and prestigious art shows world-wide.