As we´ve gathered from the text accompanying the exhibition, the exhibition´s curator was PhDr. Dominik Hrodek, a renowned art historian, journalist, university teacher, and media consultant. As he used to contribute to Glassrevue, he is by no means new to glass. Obviously, Dominik Hrodek is also the one who proposed the somewhat bizarre title of the exhibition - "Sklovotvar (Glasshape)". 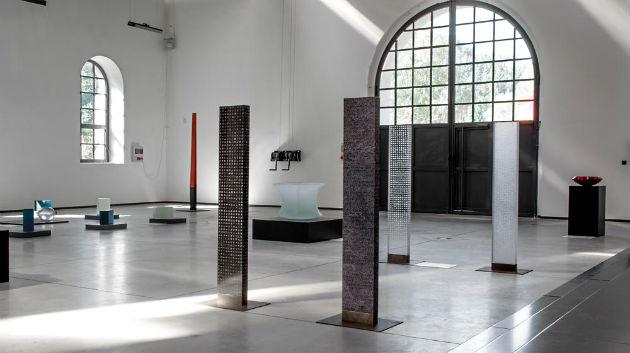 At first, it was probably just a play-on-words which only later transformed into the exhibition logo. This definitely had a positive impact on the interpretation of the entire exhibition convolute. At first glance, the order of words in the exhibition’s title – Sklovotvar (Glasshape) – (The origin title is hard to translate, the equivalent is Glasshape, or Glassform.) gives the impression that glass dictates the shape. That is true: to some extent, the material indicates the approach to its handling and determines the outcome. It lays down limits of what is possible, both technologically and physically. But it is equally true, that the final form dictates the method of manipulation with the material, or to put it simply, the idea changes the glass itself. These are aspects which are interrelated and mutually conditioned. While it is necessary to keep in mind that on top of the imaginary pyramid there is the one who has the whole process under control – the artist. That´s why the exhibition could be easily called in the reversed order of words – Tvarosklo (Glasshape). The play with the subtitle which came out as glasshapeglasshapeglasshapeglassshape... finally expressed, perhaps unintentionally, this crucial duality.

The view of the contemporary glass based on "another, somewhat more philosophical approach" is rather exceptional, locally as well as internationally. Art historians who would theoretically entertain this thought tend to avoid glass. Most art historians perceive, persistently but inaccurately, glass as an element of the so-called applied arts which are not, in their eyes, valuable enough to invest much academic effort or to use it for their own personal promotion. Fortunately, Dominik Hrodek doesn´t need any of the above. Some contemporary historians tend to focus primarily on atists oppressed by the regime prior to 1989, but there are very few glassmakers who would fall into that category. Most of them lived and worked in the so-called "grey zone". Hrodek, allegedly building on theories of Roland Barthes, a semiotic (I guess it's Gérard Roland Barthes, 1915-1980), who also adores the visual poetry by George Valoch, an artist and a theoretician and concrete poetry by Eugen Gomringer, approaches glass in a very original way.

This gives the exhibition a special added value. Although, honestly speaking, I doubt that Dominik Hrodek - except for the artistic concept of the exhibition and the accompanying text – worked on the exhibition in the sense that he would select the exhibits and worked on the installation itself, as is usually required of a curator. Both were definitely directed or at least initiated by Zdeněk Lhotský, an art director of the Pelechov company in cooperation with Peter Seifert, a representative of G1Partners, another organizer of the event. From what I know about previous exhibitions of the studio, the exhibition layout was most probably realized in cooperation with Oldřich Plíva, one of the exhibited artists who has a good feeling for space and recognises well the aesthetic needs of individual pieces. By all means, the team, which also included Jana Hradcová, a graphic designer, put together a great team presentation that perfectly fits the industrial space of the recently nicely renovated Kotelna on the premises of the former textile factory at Poříčí in Železný Brod (now the building belongs to a company called Accent Bohemia). 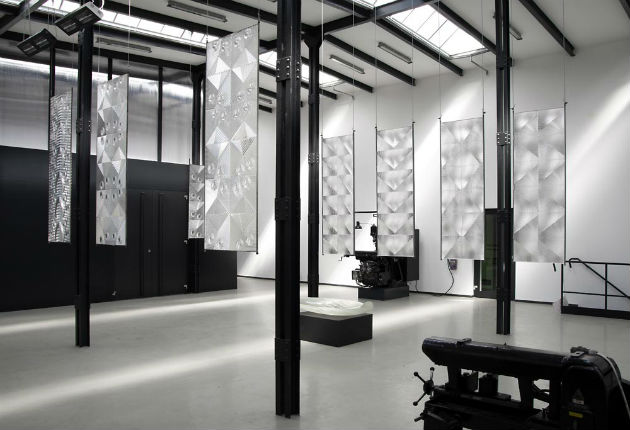 Zdeněk Lhotský presented the studio, headed by him in the position of the designer in chief, the creator of the entire concept, the man behind its business strategy and, ultimately, also the owner since 1994, in the past repeatedly. I remember the series of exhibitions to commemorate the 10th anniversary of the studio, one of which was the memorable and remarkably extensive  exhibition at the Moravian Gallery in Brno, the exhibition at the Central Bohemian Gallery in Prague where it took three floors to show all the exhibits and also the Brighton, England, show in addition to many others around the anniversary and later on (it was dozens of them). In the 90s, it was necessary to present the studio´s striking results to highlight its incredible achievements and the wide range of excellent jobs for local as well as foreign leading artists and companies. Pieces of all these clients were presented at exhibitions of production made at Pelechov. It took us by surprise and we keep amazed by the fact that the establishment which was clearly sentenced to death after the change of regime after 1989 as part of the Železnobrodské sklo state owned enterprise found its excellent domestic and international clientele so quickly.

Today, promotion is no longer needed. Lhotský has gained international recognition as an expert on cast sculpture, a master of great significance, one can say an icon. He´s been recognized for his own work, too. Studio Pelechov is highly appreciated by contemporary glassmakers, considerably more abroad than locally. The Sklovotvar (Glasshape) exhibition has the privilege to be more exclusive and present just a couple of artists close to the studio who have gained international recognition, plus Lucie Švitorková. 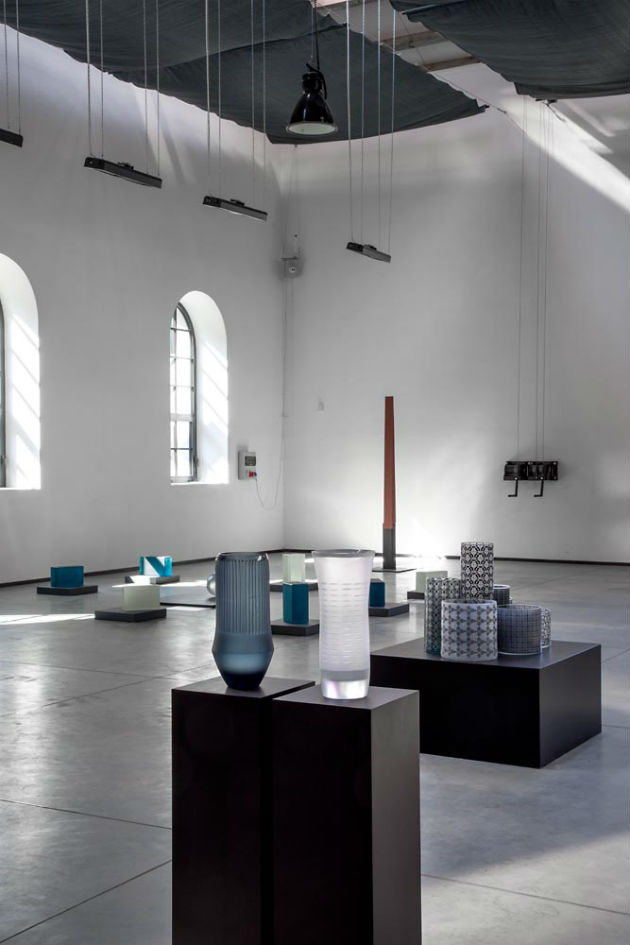 The exhibition features works by Jaroslav Róna (1957), a member of the renowned group of artists called Tvrdohlaví, an acclaimed painter, sculptor, stage designer and a head of one studio at the Academy of Fine Arts in Prague. Jaroslav Rona first studied glass with Professor Libenský. He felt that the studio could offer him more freedom than any other academic ground under the totalitarian regime. Róna, a versatile artist and a master of many trades, has invested relatively little time to glass (in addition to ceramics) but always with excellent results. In his glass art, which is to be found in major collections, he sticks to his artistic language – the ancient, archetypal to surrealistic shapes. Róna´s signature stained glass has been used in architecture.

The above mentioned Oldřich Plíva (1946), a renowned glass artist, a university teacher and Libenský´s student, has gone through several experimental periods. His first works in the 70s were minimalistic, highly cut and polished small scale stacked objects. Then he became a lone postmodernist engaged in organic shapes and materials combined with glass, sometimes verging on provocation and employing materials such as fur. In the past two decades, he has been concentrating on monumental compositions based on geometric shapes and perfect craftsmanship. Colours but for the basic black and white, rarely red, are eliminated. These are the masterpieces you will see at the exhibition. There is no doubt, that Plíva is one of the established masters of the modern Czech glass. His works are to be found in public as well as private collections in Europe and overseas. 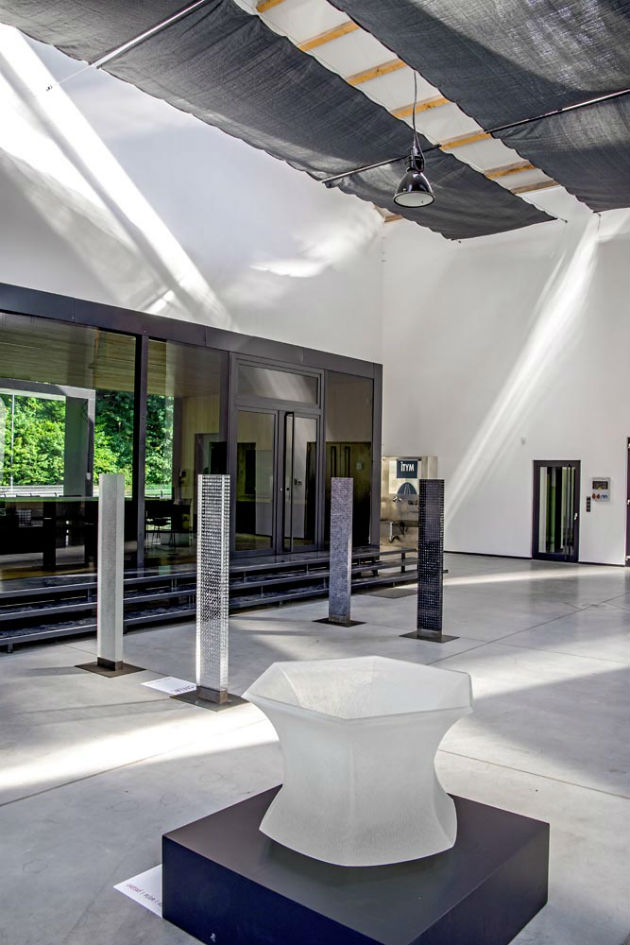 It comes of no surprise that the exhibition also features Zdeněk Lhotský´s (1956) own works. Lhotský, a founding member of Tvrdohlaví, was a distinctive student with a much different approach to glass. What made him famous were his sanded and painted black and white décors which remind us the Austrian historical decors by the Wiener Werkstätte. He applied these décors to various blown glass shapes, to the flat glass and to stelae. Recently, he´s been examining the potential of a special technique called "vitrucell" cast vessels-objects, which he himself had developed in the past. He´s been long engaged in architecture, too.

Lhotský has always been, somehow rebelliously, avoiding the contemporary Czech glass trends. Moreover, he did not hesitate to counter them. At times when it was not a common practice, he designed artefacts which could be used in industrial production. In respect of glass, he avoided sculptures, although its exterior as well as interior metal sculptures made in the '90s show that he is a capable sculptor. He embraces ornaments and décor, although both have been totally neglected by the Czech glassmakers. His decision to become the Pelechov manager was also a significant professional and financial risk, but he handled that task with success. Despite this, or rather because of this, the April issue of the prestigious Wallpaper magazine listed him among twelve Czechs, who have influenced the world of design.

The exhibition´s organisers also invited Lucie Švitorková (1985), a graduate (2011) of the glass studio led by Associate Professor Ilja Bilek at the School of Art and Design, Ústí nad Labem University. This young artist is known for a wide range of creative works ranging from minor artefacts and jewellery to larger sculptures. She also teaches at the Secondary School in Železný Brod and holds an important position at the Lhotský s.r.o., where she replaced Václav Řezáč. Her style is not yet so defined as it is with the other three artists at this exhibition and her works are thus not so easily identifiable. But it remains a fact that her artefacts never lack sophistication and creativity. To sum it up – she embraces quality which makes her career growth look very promising.

The Sklovotvar (Glasshape) exhibition is one of the major events of the Czech art scene of the second half of this year, and has therefore been extended until the end of the year.

PhDr. Sylva Petrova is a curator, writer, connoisseur of the contemporary glass art and professor emeritus at the University of Sunderland, UK, where she had worked until 2012. She currently lives in Prague and works as a freelancer.