Thomas Sledmore: There is always a risk of your work being destroyed

During Easton Arts Trail in Bristol, the whole street was left for the graffiti artists to renovate it. This annual cultural event when artists open for two days their homes or studios to show their artwork to public is now finished. Only one wall is still empty. In front of it stands a young tall man with a sketch in his hand, which is quite unique. Thomas Sledmore is not just a street artist. For the past two years, he has been studying a fine art course at University of Western England. 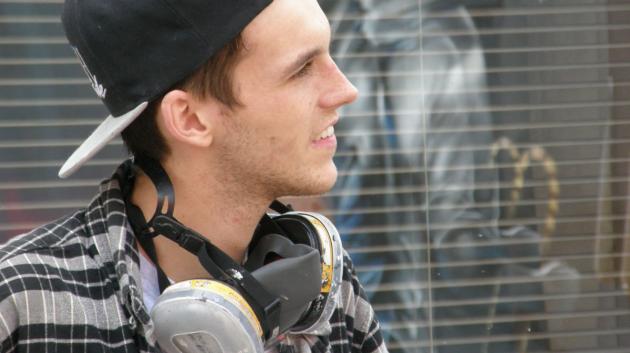 Your composition is quite unusual.
I like when things are balanced compositionally. Especially when the characters in the paintings appear to be dragged down as well as elevated. Like in this case, you have balloons flying up and the dogs that are pulling down. I like struggle in the paintings, things that have a little bit more tension. It is a narrative I explore a lot in my paintings.
A lot of people come passing by my paintings and share their own little stories.

Is it not interrupting for you that there are always people around while you are painting?
That is what I find interesting while painting graffiti - everyone who is walking by is a critic. I like that everyone is interpreting it how they want. 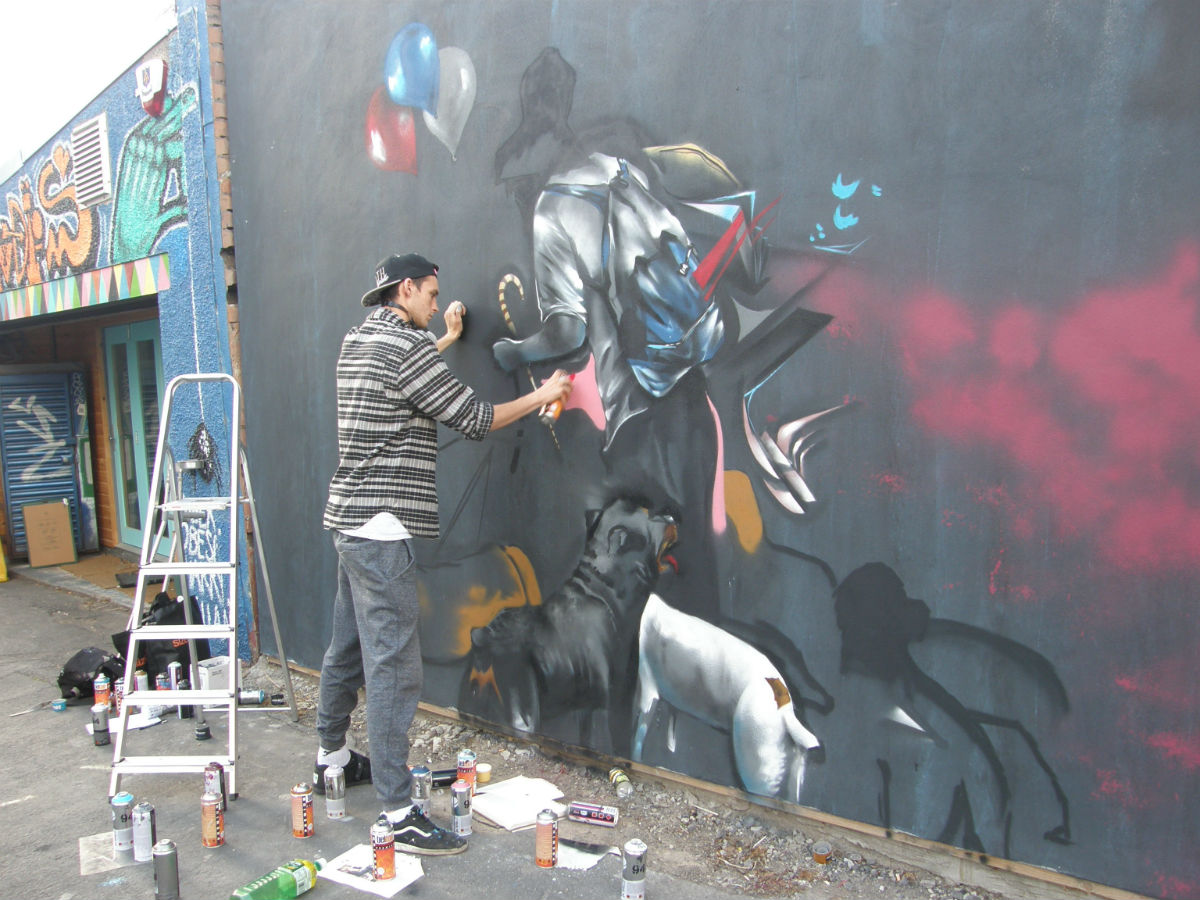 Where is your focus now?
I am interested in how  the public reacts to my work in different environments, for instance to see the reaction to my work in Easton (editor´s note: multicultural part of Bristol) compared to the same one in Clifton (editor´s note: posh part of Bristol). I think that art galleries are where art pieces go to die, that is how I see it. In galleries you see the final products, whereas streetart is always changing. That is what I really love about it - nothing is ever finished. There is always a risk of your work being destroyed by somebody else.

Despite what you said about galleries, it was possible to see your work in the shop-gallery Hangfire in Bedminster.
I did that as a test of myself, to see if I can do it – do ten canvases  in three months. The thing what I like on doing my own show is that I had a great atmosphere because we had a DJ and drinks there. It was not serious like some galleries shows. I wanted to just get together with other people and have fun!

What about the creative process itself?
As a street artist, you are facing all these other elements like weather or the possibility of being arrested. I find it crazy that you can be arrested for changing only the surface, not even a millimeter deeper. 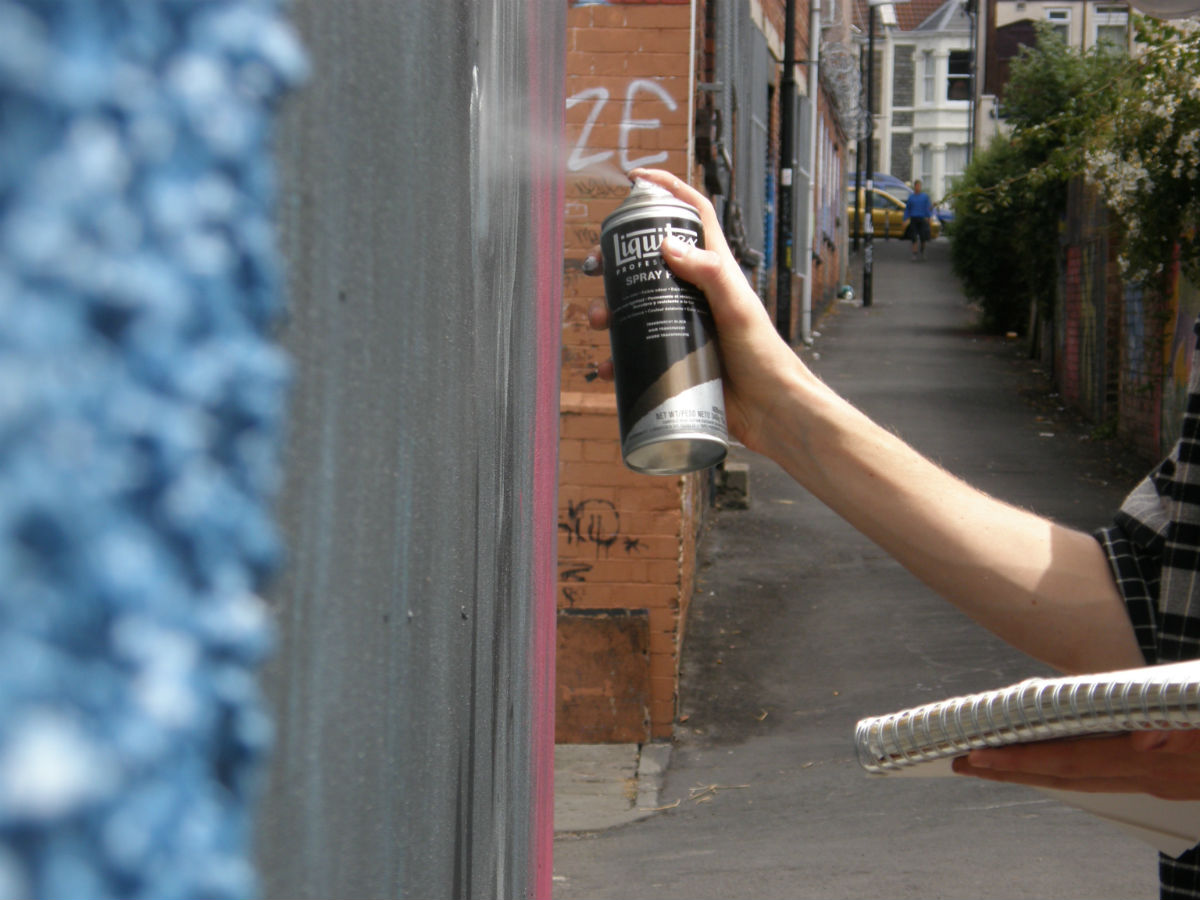 How do you feel when you walk around your older pieces in the city?
It is really good feeling especially when you see that nobody else tagged it – that means your piece is respected. But on the other hand, when I finished a piece, I do not really want to look at it again. I do not like to go back to the stuff I finished.

How did you discover this way of art expression?
It was in my local skatepark in York, where I am originally from. I saw someone sketching and I thought it looked awesome. I recognised graffiti before but I have not seen somebody actually doing it and I have not looked at it as an artform. That happened when I was about fourteen. I think that is that age when a lot of people get into it.

That is why you have moved from York to Bristol?
Exactly. I have chosen Bristol mainly because of the art scene and how free everything is. Graffiti is so abundant. It is less stigma behind it. A lot more people are accepting it. In York there was only one legal graffiti wall and that got taken away by the council about two years ago. Basically because people were painting on the trees nearby.

Do you still do illegal things sometimes?
Not so much anymore, because I already have something to lose. 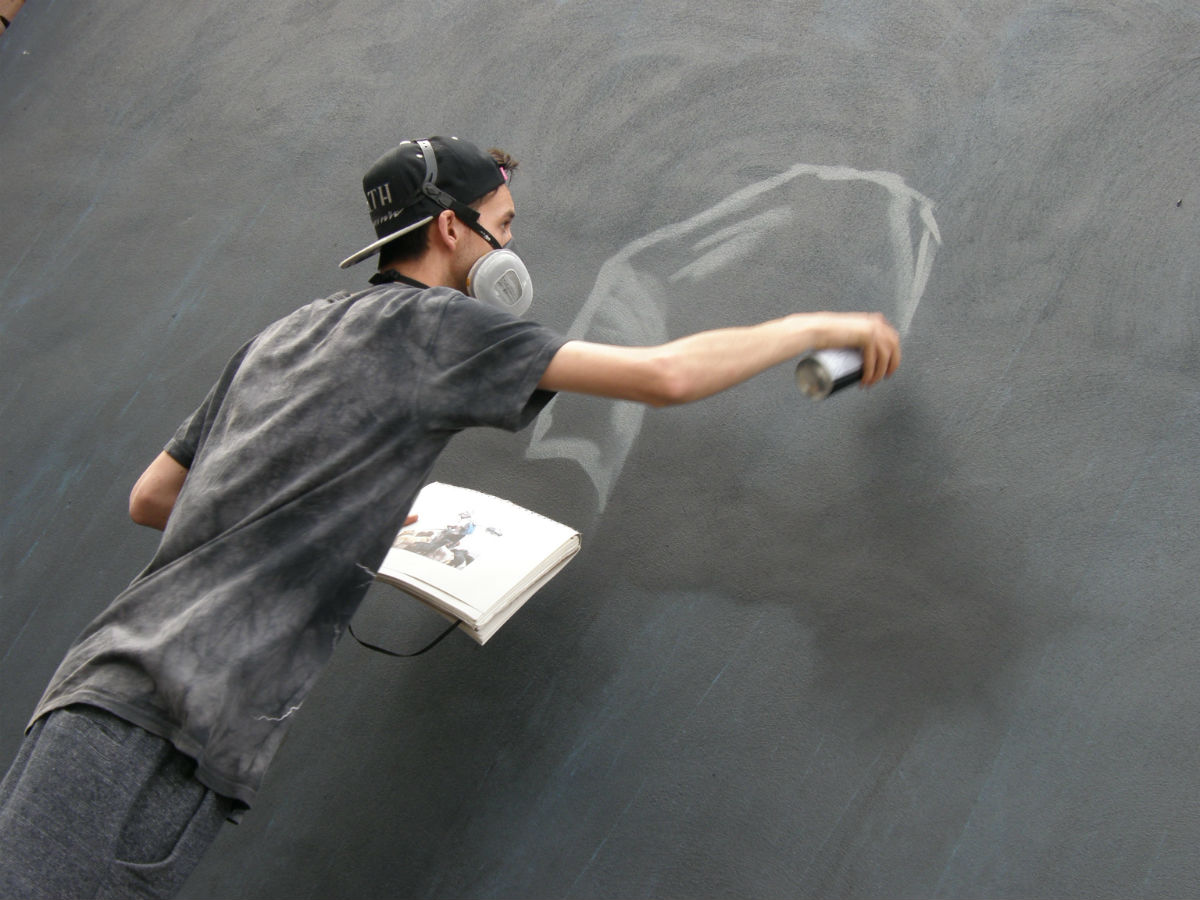 Do you sometimes work together with other street artists?
Yes, whenever we both have some free time we might do a sketch and then pass it between each other for couple of days and then go paint it together. I like it because it pushes me as an artist I think. It can make an art piece look a lot better because there is more dialog between people and the art.

How expensive are these tins for spraying?
They are around three pounds in this area. They are pretty cheap because they are made for this type of art. It was a lot harder for me to use this sprays in York because I used to have to drive to Lead to get them. In Bristol, I can name you ten different graffiti shops. The amount of places to buy art supplies in Bristol is ridiculous. 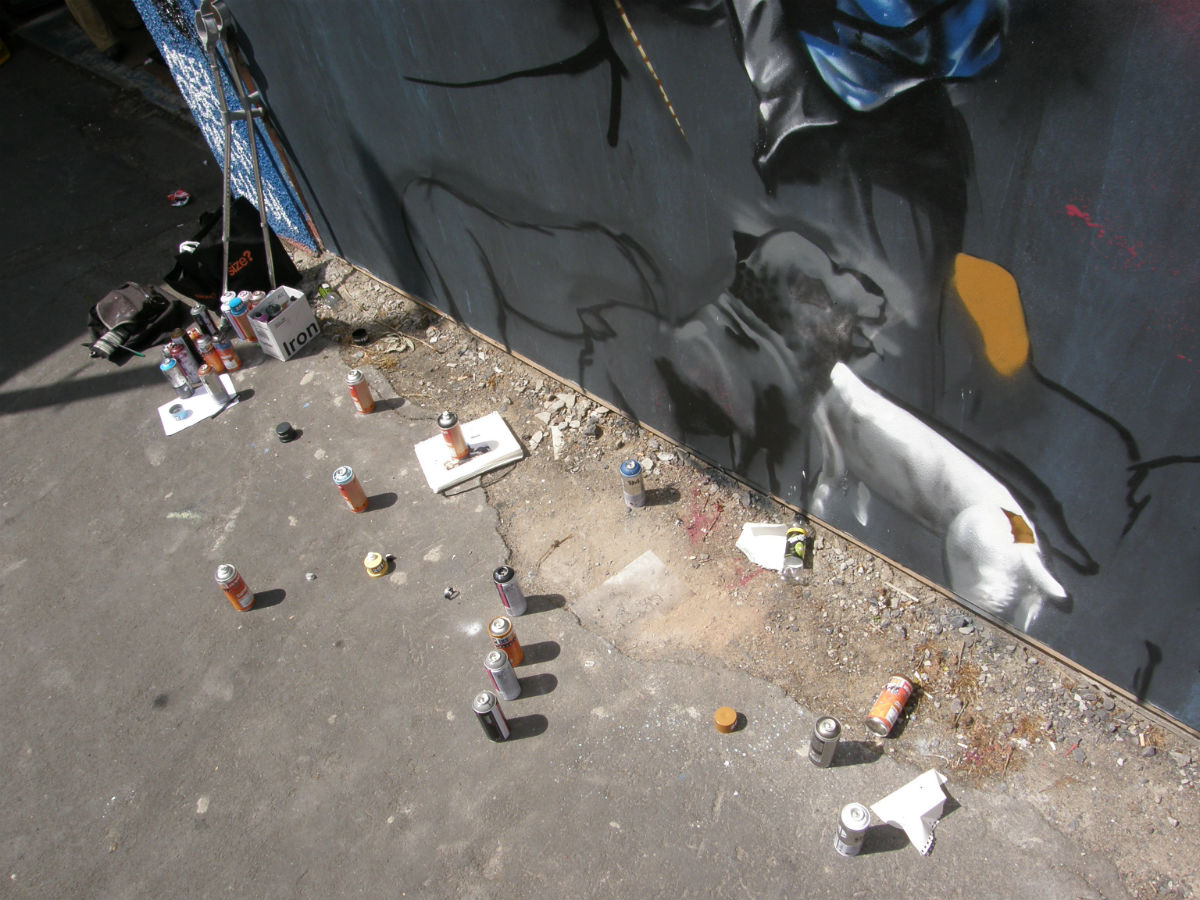 It seems that Bristol is really friendly to graffiti artists.
Yes, absolutely. Obviously, it is home of Banksy so it would be very hard for Bristol not to be associated with graffiti art.

What do you think about Banksy´s work?
He is definitely a pioneer of graffiti art in Bristol. I think he made it little bit easier for graffiti to be seen as art as well. Personally, I do not really care about Banksy. I do not think that he is that amazing, I just think that stencils are easy and quick to produce. Anyone can use photoshop and cut it out. With free hands painting you have to experiment. 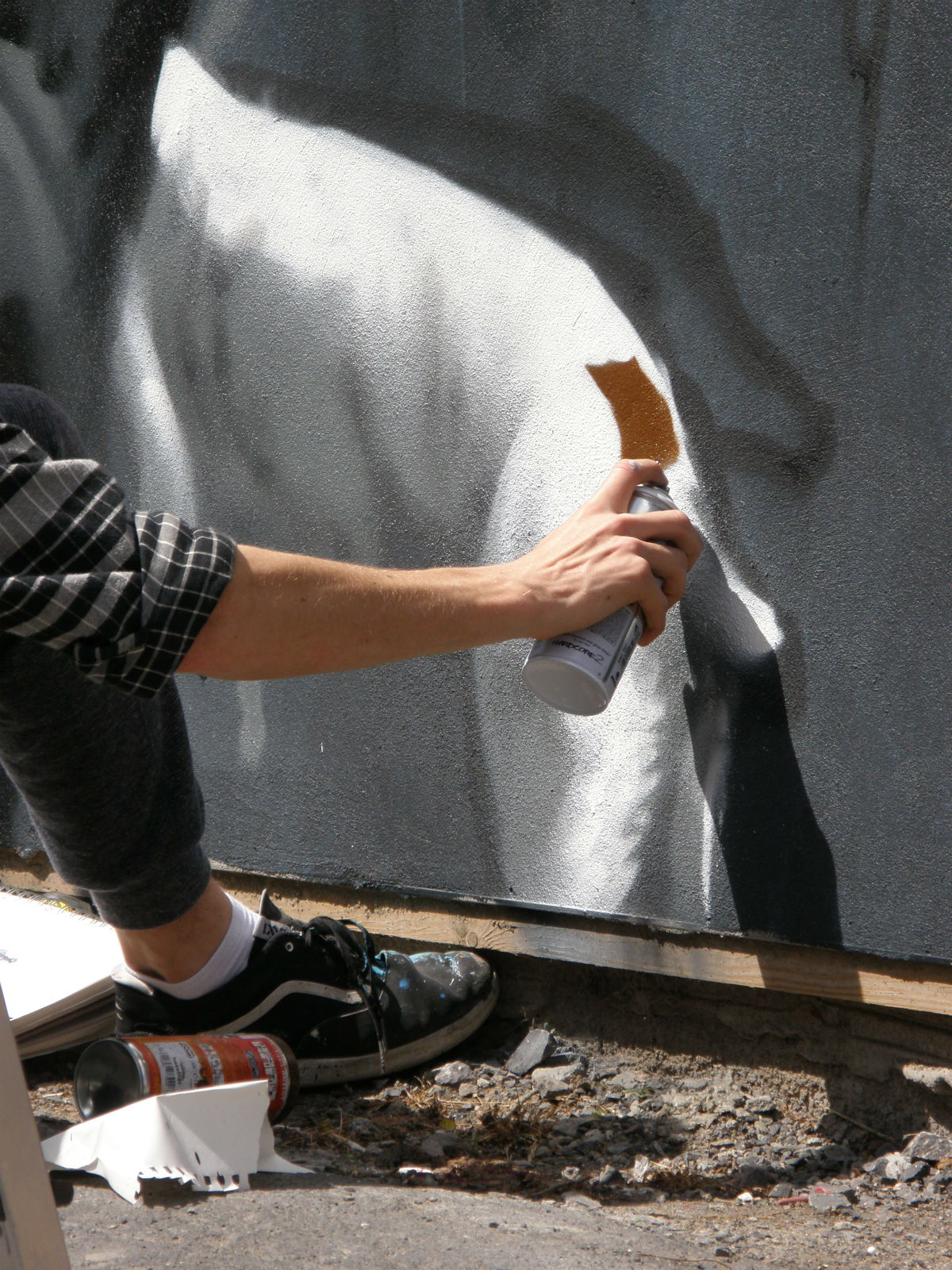 Do you have any role model in graffiti world?
Conor Harrington stuff is really good at the moment. I am looking on his way of taking characters and then strip them a power. He takes images of really powerful men and use solve or different material to strip away their power. I really like the playing around with it. His stuff is very much based on layers. It is not traditional graffiti.

What is according to you traditional graffiti?
Traditional graffiti would be definitely letters. Graffiti was born in New York City. People would do their pieces on trains, and then the train goes to the final station, where other people would see it and sent a different train back. That is how it started.

You do much more stuff than just lettering.
I am very inspired by cartoons and standard comedies. At the moment I am trying to find nice balance between cartoons and realistic things and connect them. I really do like the mash, the collage. Sometimes I like kind of unapologetic layering instead of something super realistic. 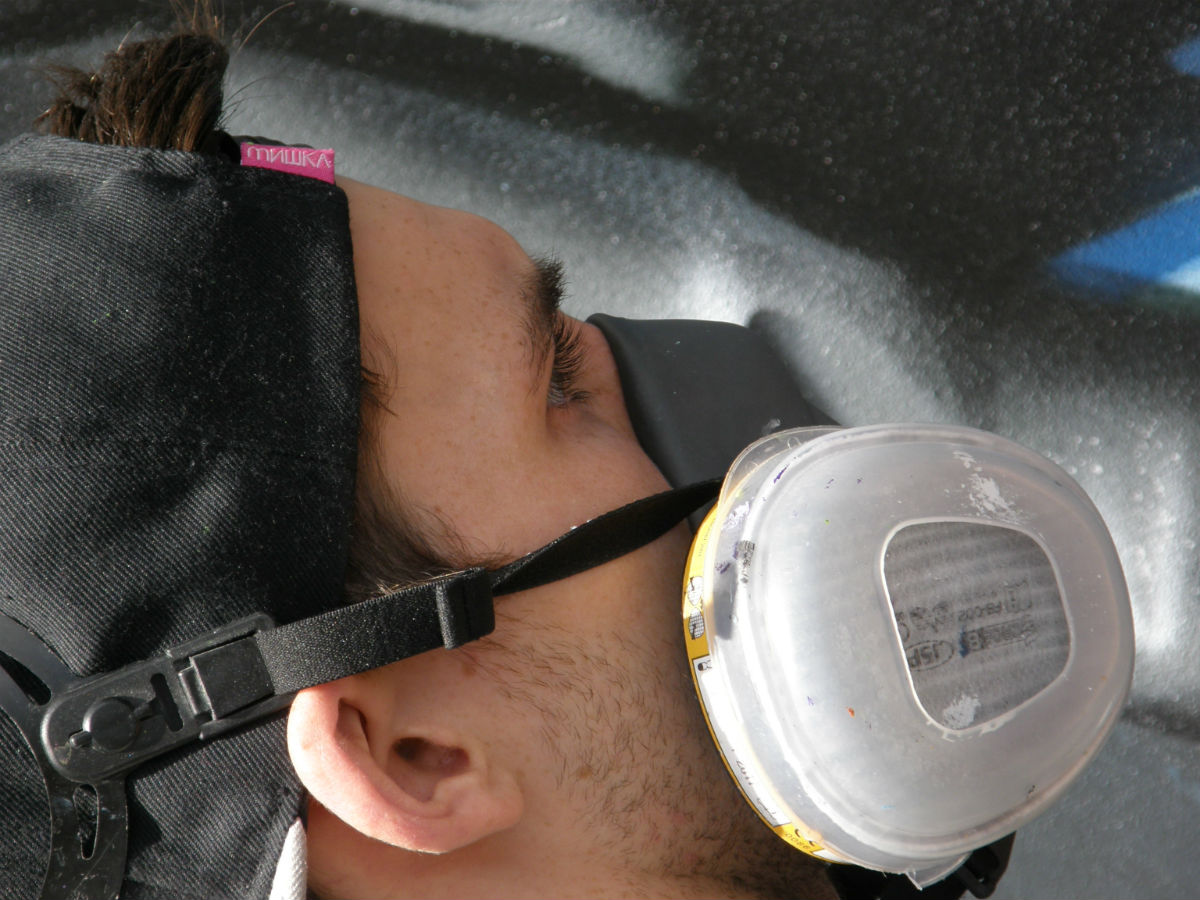 In your work I find it very interesting that you often incorporate old pieces in it.
The idea behind this is the history of graffiti art. Styles changed in past twenty years a lot. The work is instantly evolving. Never ending destruction and decomposing. People are always drawing over each other and it is never ever finished. I want to use the sections which show other parts of the wall as a kind of archeology of graffiti - pushing the layers back.

Do you always have some sketch or do you sometimes come to the wall and start intuitively?
Sometimes I go for it and just wing it a bit. I think I always have to have initial idea where I want things to be placed. And then once I start, I can manipulate it throughout the day. Having a sketch is not always good because it is not the same like being the sculptor or the traditional painter. You do not know what you are going to find. The wall might be this size or ten foot by ten foot – you never know.

What kind of walls are your most favourite?
To be honest this wall would be like my perfect wall because it is really smooth concrete and it is not too big.

What was the longest time you spent on making a wall?
I would say the longest was two full days, during last summer. It is always better to do walls during the summer because you have a lot of daylight. That is the only time in a year when I tend to do big murals.

Have you made any walls abroad?
I have done paintings in places like Amsterdam or Barcelona. By the way I want to move to Barcelona one day.

If you could choose any place or any wall in the world what would be your dream one?
There is a lot of really big concrete buildings in Poland. I would love to do a piece there. Just pick some side of a building in the middle of nowhere. There is couple of artist that do that, like Robert Proch.

And what about another media and techniques?
With paintings, I love the fact that whenever I have the idea I can just do it. As soon as the idea comes in my head, I can have the project done by the end of two hours. I think that I should experiment more with different sort of media because I need to grow as an artist. Sticking with this is fun but it is getting harder to push myself as far as I can. I might start to do animations and using these characters in different way, bring them to life.

In the future, do you want to live from art?
Yes, if I can! At the moment, I have some money from commissions and selling canvases.

What does push you?
While I am painting I am not thinking about anything. It is kind of meditation for me. I am quite a nervous person and I am always tense but when I am painting, I am just in the moment.