Even the very term “textile designer” sounds a little old-fashioned these days. But every once in a while someone comes along who hopes to kick-up the proverbial dust which has settled on the long-established textile industry. Czech textile design is something of a niche, even at home. 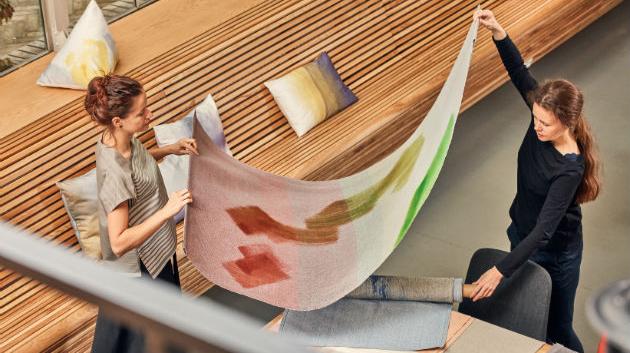 No high quality trade periodicals are published on textile design in the Czech Republic, nor are regular symposia held. And old traditions of working with textiles – both in public spaces and in homes – have faded.

The publication last year of a book by art historian Lucie Vlčková entitled Antonín Kybal: Cesty designu a textilní tvorby (Antonín Kybal: Journeys in Design and Textile Creation) provided much solace to advocates of this neglected tradecraft. Antonín Kybal (1901-1971), was a 20th century Czech textile designer and teacher. The book permits us to reflect on the highly advanced state this tradecraft once enjoyed in this country.

Kybal was not just a skilled designer, but also an inspiring personality. He first gained wider recognition during the 1930s while collaborating with Artěl [a notable early 20th century Czech applied arts and design collective – Ed.] and with Krásna jizba [a Czech design and fine arts platform, which existed from 1927-1948 –Ed.]. Artěl was co-founded by Marie Teinitzerová (1879-1960), another key figure in the Czech 20th century textile boom. In 1910, Teinitzerová founded a tapestry workshop (Gobelínové dílny) in the town of Jindřichův Hradec, which still operates to this day.

But back to Kybal, who helped herald a revival in Czech textile design after the end of the Second World War. From 1945-1970, he headed the Textile Design Studio at the Academy of Arts, Architecture & Design in Prague (UMPRUM). During this time two generations of students were inspired by Kybal’s passion for woven carpets and tapestries.

Asides from collaborating with industry – for whom he designed fabrics, upholstery and curtains – he also worked with architects, ensuring that textile design formed a key component of both public and private interiors. Which in turn ensured that the textiles produced were of a high material and artistic quality. But then times changed, and this culture of production began to wane. Yet an optimist might even view such a “broken thread” in positive terms – for today it presents a wide range of opportunities, ready for fresh challenges in the field of textile design. 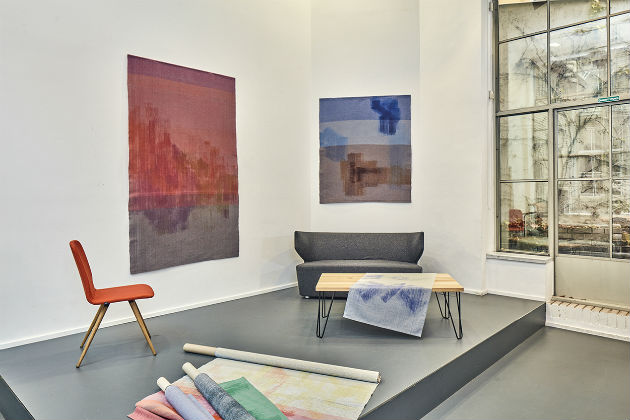 The Opero shared space. The means by which Kaplanová realises her creative designs is closely related to the ikat technique, encountered firsthand during a trip to Indonesia (photo: Peter Fabo)

More than a yarn
As a child, I dreamed of becoming a fashion designer. My subsequent fashion design studies at the High School of Applied Arts in Ústí nad Orlicí (SŠUP) convinced me that rather than showing off clothing designs, I was far more interested in fabrics themselves. And so I signed up for my university studies at UMPRUM’s Textile Design Studio in Prague. But during these studies I began to feel a lack of fusion between the creative process and the ability to apply our handicraft skills.

We had freedom to experiment, but lacked the facilities to transform our ideas into actual materials. We lacked knitting, weaving, and embroidery machines, or a screen printing workshop, which might have enabled us to pattern fabrics. Establishing ties with the textile industry also proved impossible. And yet glass studios produce glass items, and ceramic studios produce ceramic items. But the textile studio was just “winging it”, which led me to seeking out other means by which I might be able to create custom fabrics without the use of costly equipment.

One country still pulsing with a vibrant contemporary textile industry is Indonesia. It is a kind of cradle of the techniques of wax patterning and hand weaving of textiles. I headed out to Indonesia on a fact-finding trip as part of my studies, probing textile-making technologies across the country’s numerous islands. I was particularly interested in discovering whether old traditions in this field were being maintained, as well as the equipment used for weaving, and the patterns used, including the inspirations behind them.

Every location brought a different usage of colour and style of ornamentation. Many villages had at least one woman who could weave, so as to preserve the tradition. In other places I visited I saw the entire populations of villages engaged in weaving activities. Naturally dyed “ikats” [a technique to pattern textiles in which yarns are dyed prior to weaving the fabric –Ed.] on the island of Sumba were something that particularly enthralled me. Even a statue of Christ in front of a church [Sumba is a majority Christian part of the country –Ed.] featured a traditional gown.

I learned the technique of wax-resist dyeing (batik) both from the local art institute, and from local people. It is similar to the common Czech technique of “modrotisk” (blue-print). Such batik techniques then led me to learn about natural pigment dying methods, which are currently enjoying a renaissance on the island of Java. Asides from dying and fixing principles, I also learned the more complex methods involved in the production of indigo paste. I dyed yarns, designed fabrics, and local weaving mills also permitted me to fully realise fabric design ideas – a new experience for me at the time, not to mention a fulfilling and inspiring one!

The situation back in the Czech Republic is far from easy, but countries do exist – such as Indonesia – in which textile production has retained its economic viability, traditions and continuity of production. Experiences are handed down from generation to generation. With the aid of simple equipment, local people are able to create traditional works of high intrinsic artistic value.

In economically advanced countries such as Japan, governments have realised the full economic value of their cultural heritage, not to mention their unique  tradecrafts. The Association for the Promotion of Traditional Craft Industries (DENSAN) was founded in Japan, through which the state supports traditional crafts. Today more than 200 manufacturers form part of DENSAN. While in the Czech Republic, the reward for maintaining and developing traditional crafts is a mere diploma and handshake... 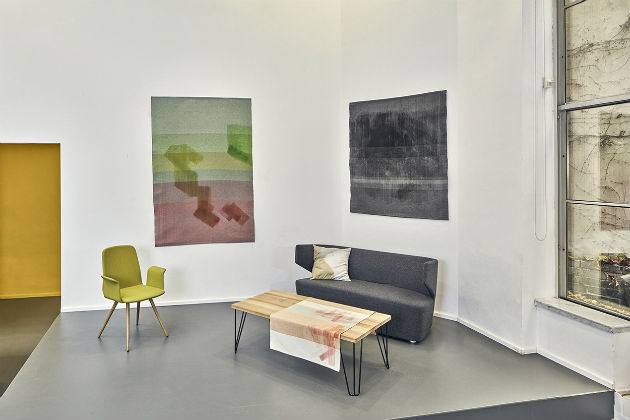 Ikat is a weaving technique in which a pattern is bound and dyed in the warp or weft prior to the actual weaving (photo: Peter Fabo)

Home production
For me, such trips serve as a kind of springboard. After my third return from Java – luggage filled with custom-made fabrics – I began collaborating with clothing designer Tereza Ujevićová. This led to the creation of several limited collections. My colleague Klára Spišková, with who I became acquainted at the textile production faculty at UMPRUM, also joined in the process of custom fabric creation. Klára and I had decided to team-up back in university, albeit without a specific idea of how to realise our plans.

The initial phase revolved around testing and developing designs into wearable clothing. This effort of weaving and dyeing for both clothing and other uses was also motivated by a desire to participate in the annual designSUPERMARKET international festival of contemporary design. We then decided to present fabrics for use in architecture at this Czech festival.

We were assisted in our efforts by a fortunate coincidence. The niece of academic artist Marie Applová offered us the use of a weaving loom which had been used by her aunt. We sought to loosely tie-in to the ikan weaving technique, drew images on the warp [a basic component used in weaving to turn thread or yarn into fabric – Ed.] and subsequently interlaced the threads by hand. This led to the creation of a collection of tapestries which we sought to present in relation with some kind of other material. And so we approached glass artist Kristýna Markvartová (aka “Krikri”), who designed a glass set inspired by the woven materials. We gave this project the name “Geometr”, and subsequently gave our textile studio the very same name. 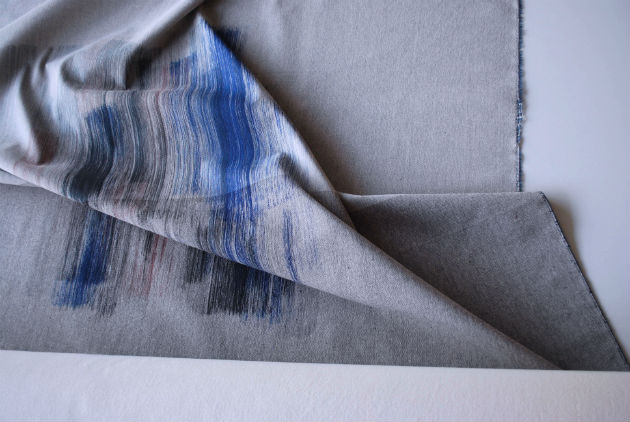 Our joint efforts seek to develop textile production and design via a modern utilisation of traditional techniques. Asides from weaving on a handloom Klára and I also began utilising the artistic weaving mill of the Kubák family [Tkalcovna Kubák Strmilov, k.s., located near the town of Jindřichův Hradec –Ed.], where we have the opportunity to weave on an industrial loom, thus broadening our portfolio. For us it is important to be present during the entire production process of our textiles, and we are grateful that the Kubák family has made its facilities available to us, enabling us to utilise their looms to create warp yarn “our” way.

And this goal also led to the creation of a second collection called “Kontrasty a kontexty” (Contrasts and Contexts), comprised of materials woven on three different looms. We also continued to develop hand-woven tapestries featuring warp yarn imagery. This technique was also utilised for cotton, which we spun using industrial equipment. The third material was linen, suitable for clothing, produced on a Jacquard loom and featuring hand dyed linen yarn in the weft. We presented this collection at last year’s Designblok Prague International Design Festival, where we secured a nomination in the “New Product” category. We also won in the “Discovery of the Year 2017” category at the Czech Grand Design awards.

Spinning a yarn
The fact that textiles can be integrated with other materials has been, and continues to be, a key factor. Glass, ceramics, porcelain and metals cannot always be mutually merged in such a manner. But almost always a way can be found to integrate textiles with the above materials. And that represents a huge inherent advantage. The grounds for collaboration with other professional fields should be laid during one’s studies. Schools should actively cultivate ties with producers and manufacturers.

Perhaps larger manufacturers are wary of risk, but smaller, more flexible firms surely have much to gain from such collaboration. Stepping outside of existing production line practices – in which products are conceived without quality designers, and talented people left marginalised – is crucial. One such illustrative example is the sorry aesthetic state of contemporary Czech lingerie. Textile designers should also be able to naturally integrate themselves into teams of architects, designers, clothing manufactures. After all, “creation” that spans multiple fields of industry is both a sensible and ultimately highly rewarding way of doing business. 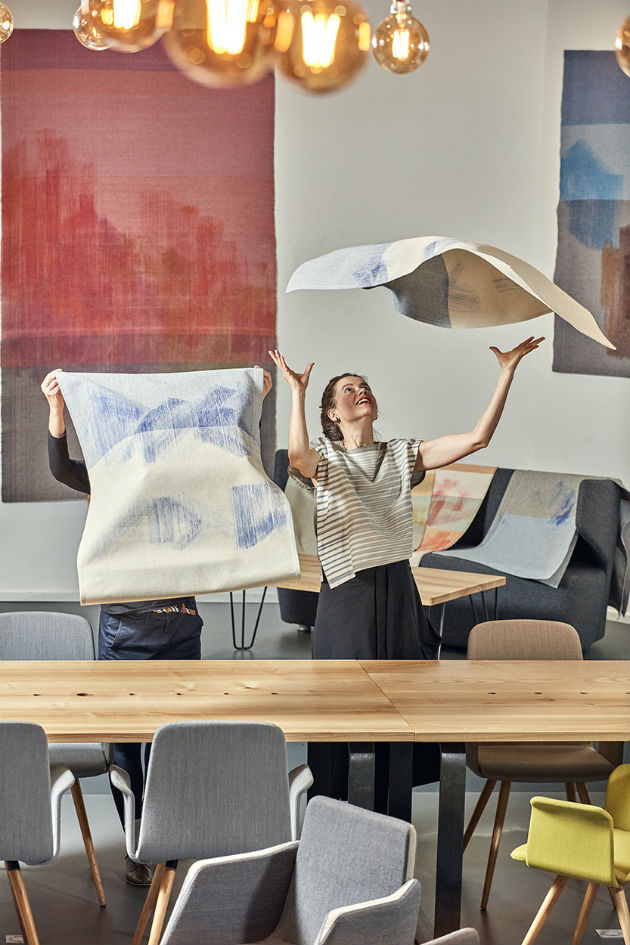 Linda Kaplanová graduated from the Textile Design Studio at the Academy of Arts, Architecture & Design in Prague (UMPRUM) in 2012. Her studies included research fellowships in Poland, Portugal and in Indonesia, where she spent two-and-a-half years studying traditional textile techniques. After returning from the island of Java, Kaplanová began collaborating with clothing designer Tereza Ujevićová, for whom she creates custom fabrics. In 2016 Kaplanová and her colleague Klára Spišková founded the GEOMETR textile studio, which devotes itself to custom-made fabrics for fashion and architecture. The pair won the Elle Deco International Design Awards in the interior design category for the 2017 and 2018 competitions. They were also awarded the “Discovery of the Year 2017” prize at last year’s Czech Grand Design awards.