DESIGNBLOK – what a stool made from salt would say to a silk lampshade and a bag made from organic plastic?

All six projects of the Dutch and Czech designers target contemporary issues. The designers experiment with materials seeking solutions to the most burning issues of the today´s world. Eric Geboers is working on a concept of salt cities – in Prague he will exhibit a stool, a part of his Salt Pup project. The Czech project called Frusack reacted to the huge number of single-use plastic bags people trash every day and now offers an alternative in the form of bags made from PLA. 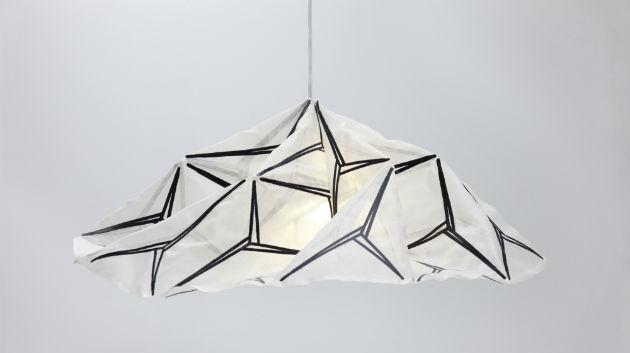 Individual projects have much in common – material-wise and theme-wise, too. Designers around the world have busied themselves with topics such as waste processing, biodegradability, reintroduction of natural processes in production, and fusion of new and traditional technology. Material Dialogue, a joint project of matériO Prague, a material library, and the Dutch Het Nieuwe Instituut, strives to critically reflect on these issues. “We´ve supported young innovative material designers from the Netherlands and the Czech Republic. We are excited to see the fruits of this confrontation of their knowledge, experience, and creative ideas,“ says Lucie Havlová, co-founder of matériO Prague.

The Dutch Het Nieuwe Instituut, represented in Prague by Christine Vroom, a curator, is known for its activities in the field of sustainability and innovations in materials and design. “We believe that artists and designers working with new materials live and die with sustainability. Sustainability is the key challenge these days and the quickly vanishing natural resources in combination with the ever worsening quality of the living environment have made us be serious about new production processes and changes in the consumer behaviour,“ says Vroom.

Except for the group exhibition of artefacts at the Prague’s Designblok Openstudio in October 27 to 31, the designers also participated in a seminar and a public debate. “Many companies, which have failed to involve new materials and technology, will soon go bust. New technology and innovations have changed the world in which we live and will continue doing so extremely fast. Those who keep waiting along are due to stay behind,“ says Havlová. 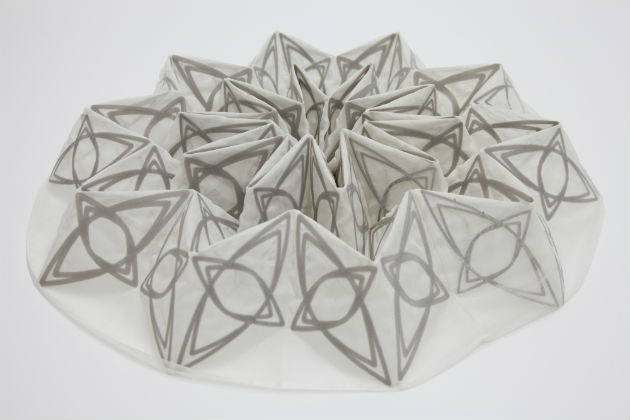 One of the authors, Michelle Baggerman, targeted the new and the old in the textile industry. “At the Kyoto Institute of Technology, I cooperated with traditional producers of Japanese silk. I kept looking for alternative scenarios to the use of this traditional material, I combined PLA printed at a 3D printer with fine 14 Den silk thus giving the resulting material completely new properties,“ explains Baggerman. This variably structured material offers, next to its visual attractiveness, new potential for its use. Under the umbrella of the Material Dialogue, Baggerman exhibits her collection of lights and fans. 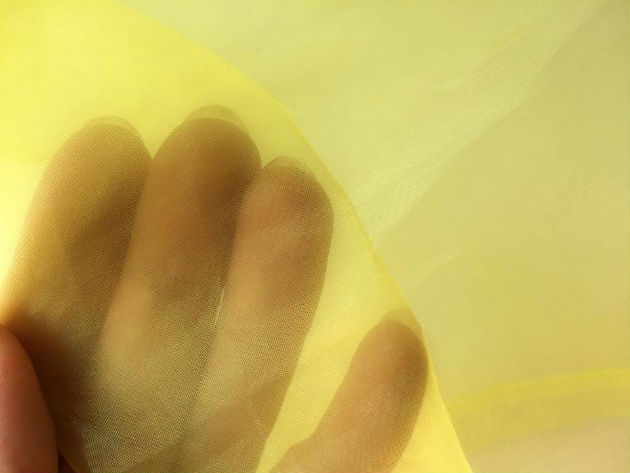 Frusack is a local example of material innovation, a project to which matériO Prague also contributed with its consultations. “In the Czech Republic, each of us uses up to four hundred single-use bags a year. On top of it, such bags get rarely ever recycled. Frusack is our alternative to the single-use bags we use every day when shopping for fruits and vegetables,“ says Hana Němcová, who designed the new material together with Tereza Dvořáková, her colleague. The young ladies developed a fabric made from a bioplastic known as PLA, which is durable, washable, light, and transparent. The bag made from this material is reusable and compostable. 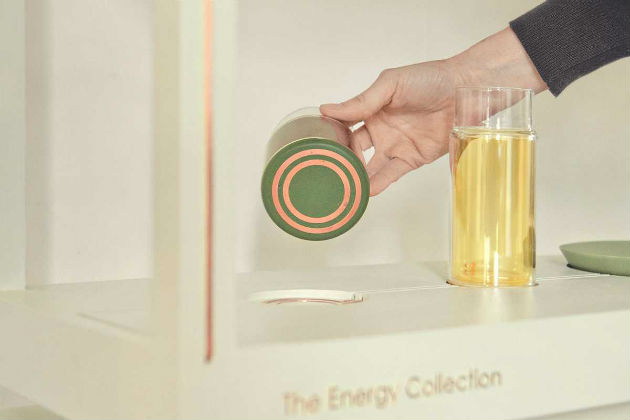 Marjan van Aubel and her Energy Collection project show that one can draw definitely inspiration from nature and its complex biological processes. Van Aubel calls her designs the “living objects”. Next to their standard functions, they can also be used for collection and “harvesting” of solar energy. “My designs use a number of innovative materials – from foam porcelain to integrated solar panels based on the distinctive properties of colours. As an intuitive and curious person, I believe that design would work best when drawing on numerous disciplines,“ says the world renowned designer.

In Prague, van Aubel presented a part of her collection of dishes, which collect solar energy from their environment and store it in a pantry, which serves as a large battery. The energy generating system, which can easily become, unlike most standard solar panels, an integral part of your home, is based on a solar technology developed over years by Professor Michael Grätzel. 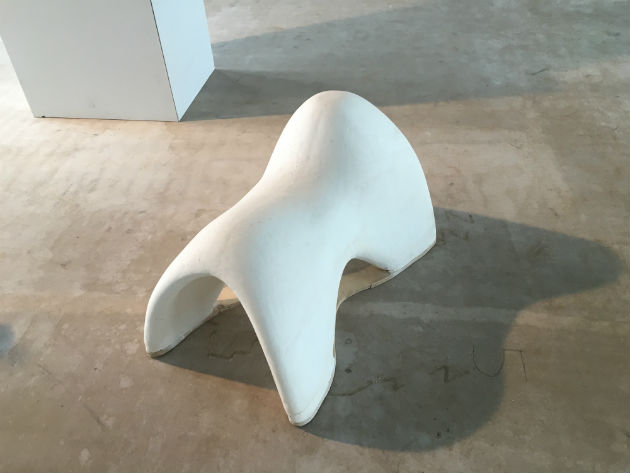 With growing concern, Eric Geboers has been watching desertification, which has, among others, led to extreme loses of arable land. Similarly to Marjan van Aubel, Geboers has been using the natural science facts in combination with his designer´s imagination. “The Salt Pup project is a biomimetic attempt to use the locally available resources to help solve the problem of desertification. One of the options is to pump saltwater to extremely dry areas where it gets distilled with the help of solar energy. The leftover salt can be used as a construction material and the result is waste-free and enclosed ecosystem,“ explains Geboers.

Geboers brought to Prague his salt stool, but his imagination goes far beyond this simple piece. He perceives salt as a basis of a composite construction material and draws imaginary salt cities where vapour and colonies of green plants contribute to better climate. Time will show whether his vision will go beyond the design stool and salt will be used to construct more solid structures. The issue Geboers decided to tackle is definitely one which attracts attention which will continue growing. 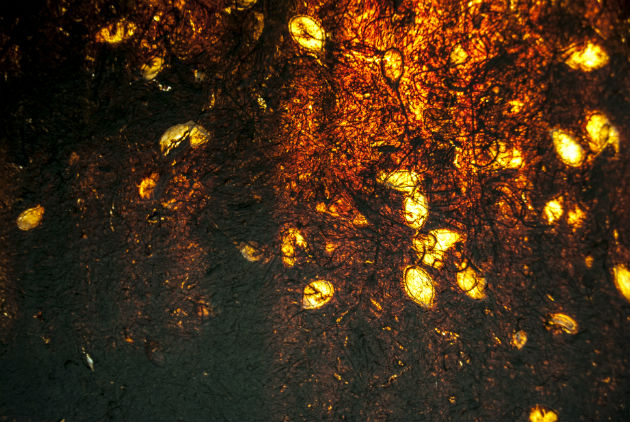 Eliška Hlavačková, a student from the Textile studio at VŠUP, changed the angle of perception of a squash and started to handle it as a raw material, not as waste. “I created a biodegradable and almost transparent foil, which can be layered to solid and durable shapes up to one centimetre thick,“ explains Hlavačková and says that this squash experimental material is as durable as poplar plywood. At the Designblok, she used the foil as a lampshade. 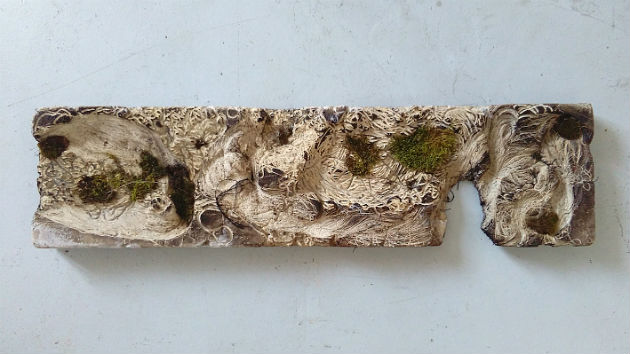 Ondřej Trnka, also a VŠUP student, started his material vision project with a rope and matches in his hand. Inspired by ant paths, he created a concrete shelter to help grow greenery and moss. “I tested paths created with the help of a textile thread, which I coiled, lined up and tied to later cast it in concrete. When the concrete hardened, I set the thread in fire and to burn it out, “explains Trnka to describe the origin of paths in concrete which evoke slightly apocalyptic atmosphere. Greenery rooting and growing from the perforations make us hope for better future.