Glass artist Anna Polanská on the tectonics of internal architecture 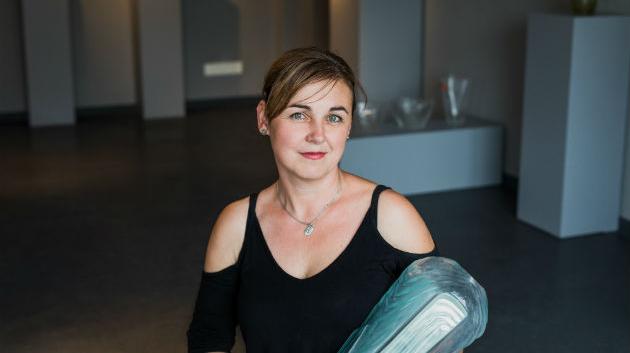 “I don’t particularly believe in cold reasoning as a means to determine subject matters or artistic forms; rather, I work in a very primitive sense, simply instinctively mining inspiration from within. I love the tension, concentration, and then afterwards the feeling, when everything is running smoothly, and you are certain that you are a witness to something beautiful being created. That euphoria and sense of good fortune is quite fleeting, but it means that you have successfully navigated through the birth of a new idea,” says Anna Polanská.

Asides from glass, Polanská’s new works also reflect an interest in exploring the forms and emotional resonance of elements that comprise the architecture of the natural world – namely land, water, and stones; these are interposed with gentler more ephemeral substances – the sky, vegetation, and so forth. The grandiosity and sense of substance of Polanská’s previous creations, featuring roughly carved chunks of glass, and interventions yielding grinded and sculptured vases and other containers, have been somewhat tamed in this latest collection. Instead we have a more linear, and often more refined, sense of elegance – her glass vessels are more fragile, more airy, and feature surfaces that are disrupted via a flaking effect, are lightly ground, and are further softened by frosting.

“The tectonics of these new works is derived from more sophisticated, and more unified, internal architecture,” notes Polanská. “Internal architecture derives from us, and constantly evolves based on life circumstances, experiences, new knowledge; but it also reflects mistakes and missteps. And it is this internal architecture that serves as an inspiration for every artist; for it represents a tangible manifestation, presentation and culmination of our efforts. And without this, such work would lack an inherent sense of purpose.” 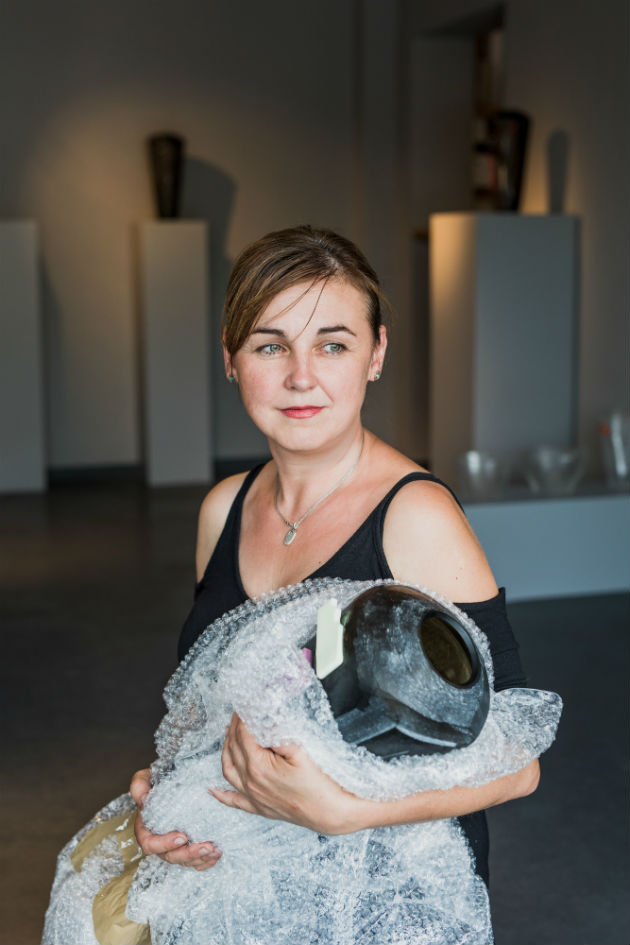 Anna Polanská was born in 1973 in the Czech town of Mladá Boleslav. She graduated in the field of glass engraving from the Secondary School of Glassmaking in Kamenický Šenov 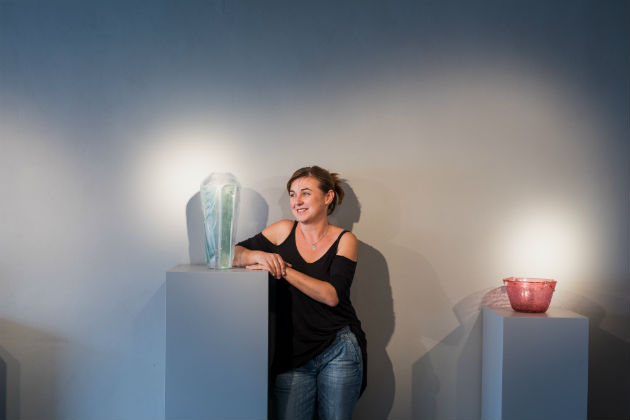 This was followed by university studies at the Academy of Arts, Architecture and Design in Prague (UMPRUM), first at the studio of Professor Kurt Gebauer (sculpture), and subsequently under Professor Marian Karel (glass in architecture). Polanská has spent the last eighteen years heading the glass engraving department at the High School of Applied Arts for Glassmaking in Železný Brod

Details have always played an important role in Polanská’s works, helping to determine the expressive and philosophical import of given works. But the details found in the works presented in the Tectonics exhibition are somewhat different – they feature simpler contours, and ones which play a significant role in the surface shaping of the given glass vessels, and thus also their overall utility and function. In other words, something has been added to such objects, which would otherwise be absent. For artists, how they intervene in forms via the means of adding, subtracting, dividing, and shaping, represent crucial symbolic and philosophical acts towards the generation of aesthetic meaning. Such interventions mean that details are specifically highlighted, often even becoming the dominant feature of a particular objet d’art.

“I collect various individual images, sometimes featuring abstract, and sometimes more specific design ideas. The possibilities for detailing, particularly of the naturalistic variety, can be added ad infinitum. The selection of those which are ultimately added, is determined by an effort to create and display the kinds of relationship which I feel a given work should express – a certain feeling, which then during one particular moment gains a specific form, proportions and becomes a representative whole. Relationships and form come to a person naturally, and then you know that what has come is exactly the inspiration that you needed.”

One particular new component of Anna Polanská’s work to be found in the Tectonics exhibition is a collection of vases decorated with “hanging” ornamental glass tubing, pearls and corals connected by thin wires, evocative of old-fashioned Christmas tree decorations from the 1950s. The centrepiece of this mini-series is the Terra Romana vase, which is enveloped within a spun or netted layer of fragile glass decorations, leading the vessel to radiate meaning via the numerous elements which are caught up in its matrix.  “And these ornamentations really are inspired by Christmas decorations,” says Polanská.

“The need to express myself via this particular form came by spontaneous inspiration. The resulting collection thus came about very quickly and easily. I decided to explore the expressive possibilities via the utilisation of netting created from threaded jewellery components, which I either hung onto, or wrapped around, my [glass] formations. This ultimately led to the creation of a collection of, to a greater or lesser degree, wrapped vases and bowls. It was something entirely new, which has certainly not suffered for its sense of playfulness and ornamentation created by the addition of beads and tubes.” The collection was inspired by  an assignment from the Letní sklářská dílna (Summer Glass Workshop) in Železný Brod back in 2016. At the same time, it serves as a tribute to the grand history of jewellery-making in this region, in which almost every patch of ground was once in some way connected to now-defunct local jewellery-production – glass beads, chandelier drops, tubes, and so forth...

For Anna Polanská, the alpha and omega of her work is represented by an expression of her feelings on man’s relationship to the natural environment through the use of shapes and structures themselves modelled on natural (tectonic) forces. These include cracks in the earth, rock overhangs, and gullies carved out by rainfall. Her aim is to capture such natural phenomena and reflect their beauty, as well as their changeability and ephemeral nature. Polanská believes that such aspects can be captured not just by being a ripened glass artist, but chiefly by simply being receptive to inspiration when it bubbles in the imagination. 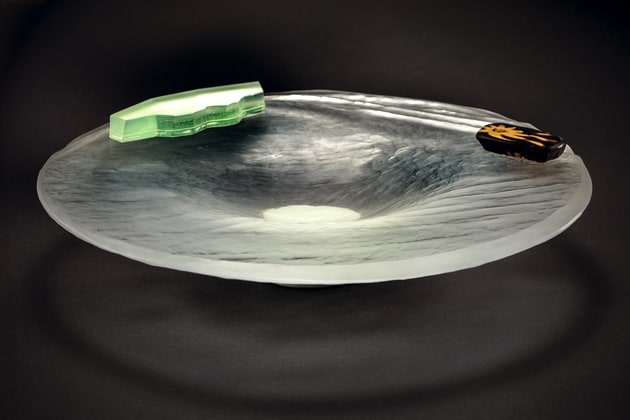 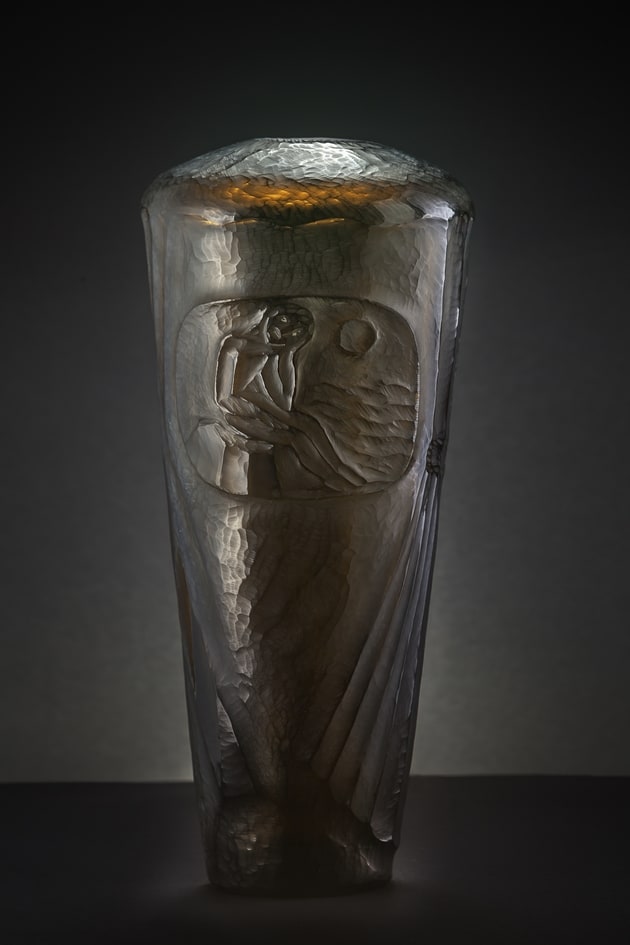 Such “in the zone” moments are far from given for any artist; after all, the aims, intentions, and receptive abilities of those in this field vary considerably. Anna Polanská’s current output could be described as a select emotional atlas of nature, with glass landscapes enthralling observers with their stark, but empty, relief, and their lack of a human presence. Albeit the artist’s Filosof and Etrusk vases represent a notable exception to the above, featuring singular, yet vicarious, representations of a human presence. In all these works, nature is the dominant force, and is thus featured in a primal role.

But the Tectonics exhibition also features decidedly human-centric works such as the glass bowls Rty (Lips), Letadlo (Airplane), Židle (Chair) and even a sculpture of an entire human head. All of which perhaps serves to illustrate that alongside nature, Polanská has also been delineating a second, entirely personal authentic atlas, this time with humans very much front and centre. According to the glass artist, these day-to-day elements made their way into her work for a simple reason – as a mother of three young children, Polanská no longer merely ponders the meaning of the natural world as an individual being. And this sense of family has consequently made its way into her art. Consequently, planes, lips and chairs also form part of the aesthetic beauty of the familiar and comfortable world of Anna Polanská. 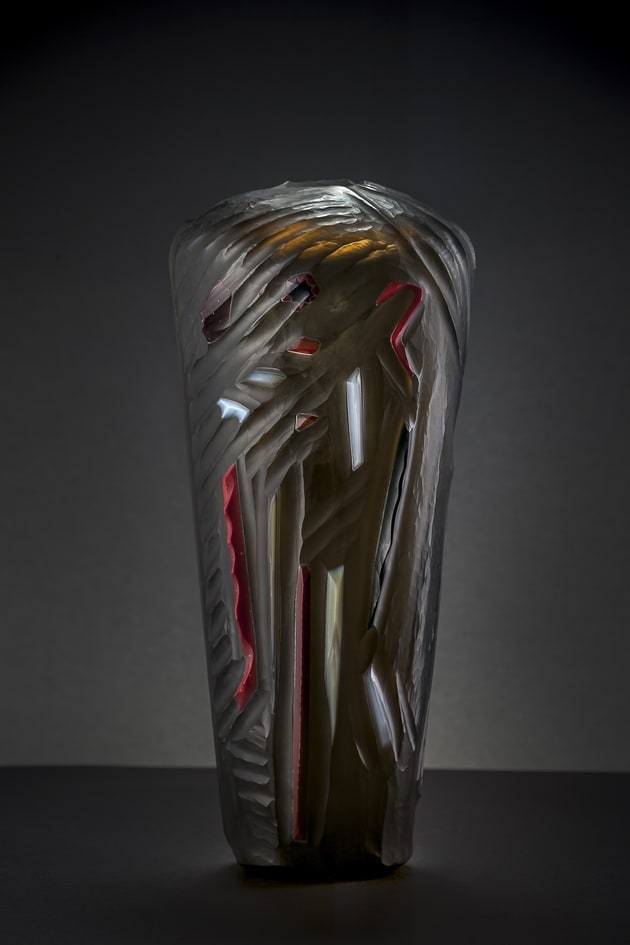 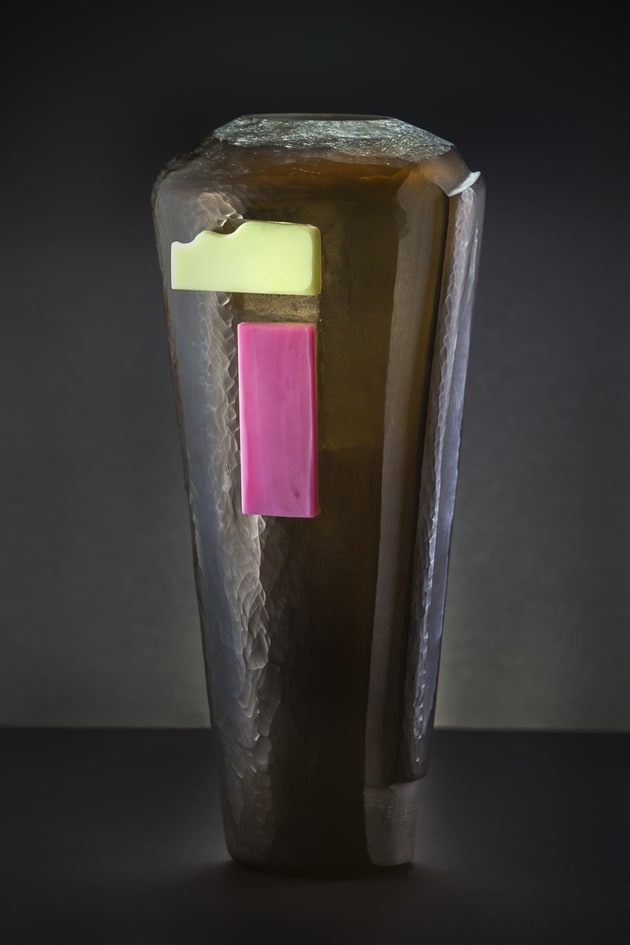 The objects on display radiate a sense of strong emotional storytelling, serving as a testament to Polanská’s role as an artist, mining her own instincts in the search for new forms of expression. And this strong translation of the personal into artistic form is deliberately designed to leave little room for observer interpretation. Indeed, allowing observers such flights of fancy, argues Polanská, runs the risk of works being misinterpreted: “I push to express certain sentiments and truths, and that is why I wouldn’t really want for anybody to be able to draw anything they want from examining my works. Abstraction can be a very loose thing, enabling the observer to project their own sentiments onto a particular work. But that is something that disquiets me. When you give people too large a space, and thus the ability to project their own fantasies into a given work, then you run the risk of being misinterpreted; indeed, you have really just laid the groundwork for viewers to project themselves into artworks. But I believe that such works should really be about transmitting to the observer your own point-of-view, your own expressions and reflections of the world. And ideally you are also presenting such observers with the chance to be confronted with new values which you have wrested your way to expressing, and which you translate as your own authentic form of artistic inspiration. But of course it is everybody’s own personal matter as to how they interpret an artwork; all I know is that is that for me, the process is one of concluding a particular journey through my consciousness, and that the expressive form of an artwork represents the final product of that journey.”

Anna Polanská gained an education in both glass architecture and sculpting. During her subsequent career, she has never been tempted to deviate from glass as the material of choice for her artistic expression. “I find that glass works best for me because of its sense of utility and function. When you respect those fundamentals, glass becomes a highly useful material. Just like anything else, the more you get to know it, the better it serves. And when you harmonise sculpting and a good material, and you limit the result to the size requirements of a given object, then you create a framework for architecture, and this then aides you in the creation of a refined and unified whole. Architecture, even in today’s ‘fluid times’, has, as it were, become the mother of all the fine arts. But art itself is something that we bring to life through the force of our own talents and imaginations.”