Devils Towers and even a chameleon’s collar. Galerie Kuzebauch is exhibiting new works by Klára Horáčková

The core concept, evolution, and the final process by which glass artist Klára Horáčková creates and realises her works, is the subject of an exhibition at Galerie Kuzebauch entitled “Evolution”. In essence, such time-consuming processes appear safer than the risk of chaotic revolutionary eruptions in which the outlines of a future work spontaneously emerge on the surface, and the mind and hands of an artist are controlled by creative intuition. 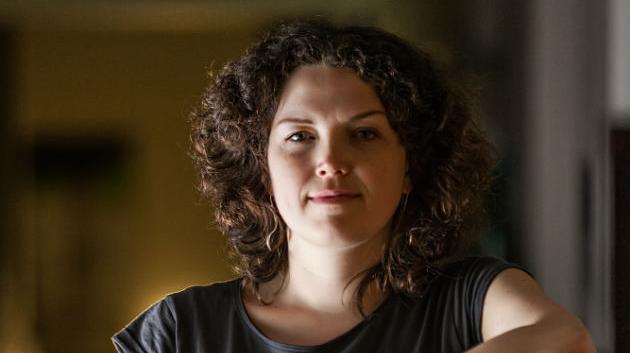 Yet evolution, too, contains its own risks and is full of its own uncertainties, albeit of a different kind. Such uncertainties specifically stem from selecting a slow path, filled with difficult decisions. “But an author has to create, even if they aren’t one-hundred percent sure of the outcome. The reward for that is that they discover paths which they otherwise might not see if they didn’t simply begin the process,” says glass artist Klára Horáčková. 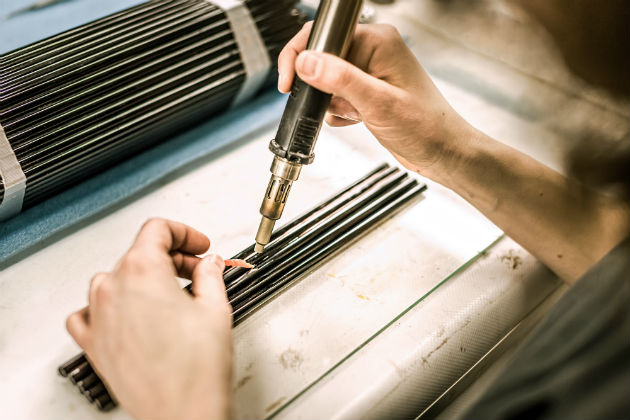 Evolution is a process which Horáčková cannot avoid; indeed no artist, artistic style, society, or historical era is immune. At first, the evolution of the thought process, and the birth of an objet d'art is undertaken secretly, with chaos battling against itself and time required to resolve differing impulses. After that it’s purely a case of the survival of the fittest embryonic idea. But the word “chaos” is certainly not applicable to the artistic methodology of Klára Horáčková, as the works on display have emerged via interventions of surgical precision, with each cut and detail that formed a future sculpture under precise control with no room for excuses. Their evolution is rational, strict, and carried out away from prying eyes. 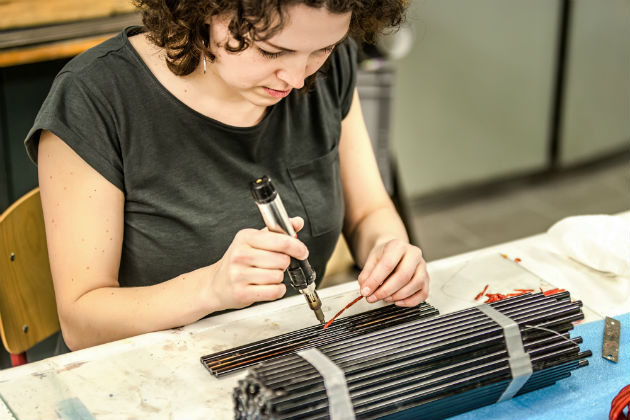 “The techniques which I use are very time consuming. The works don’t blow up in my hands just like that. It is a prolonged process, especially the molten glass and fusing methods which I use. I am interested in structures, sintering segments together, and having control over shapes and details,” explains Horáčková. 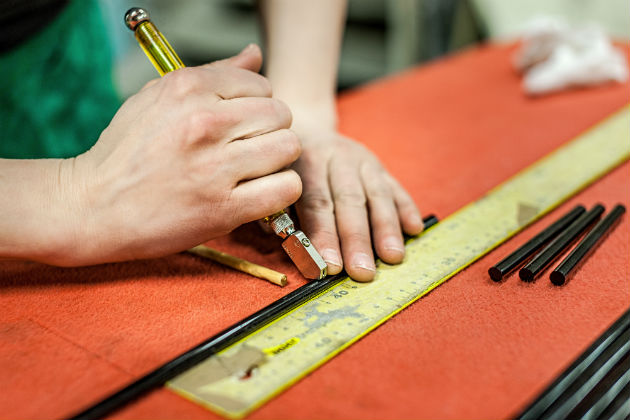 Asides from entirely new works, the “Evolution” exhibition also comprises three earlier pieces. While examining the whole it is evident that evolution – of theme, of form, and of technology – was also at play in her earlier works, and in a manner that blazed a path to the drama of her latest evolutionary steps, namely “model 2017”. 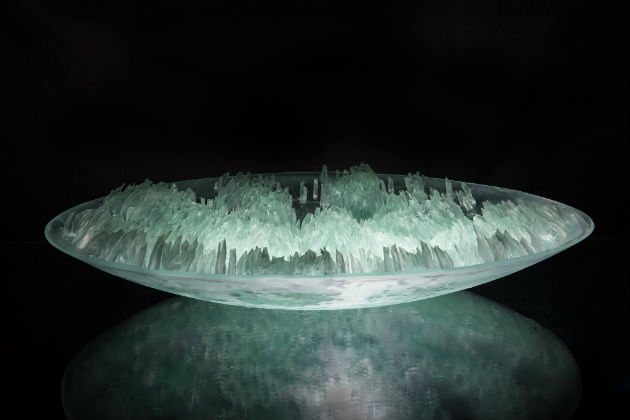 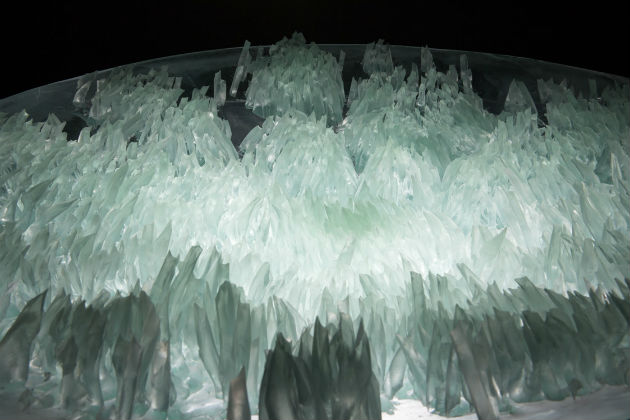 The works are from fused glass, with two robust vases entitled “MET” (2002) and a monumental bowl of clear fused glass entitled “Mikrokosmos” (2014) featuring optimistic light tones of viridescent crystal spines fanning out from the inside of the huge bowl, symbolising a vital energy indicative of continual growth. To that we also add two smaller bowls (unveiled almost exactly a year ago at the Vodováhy / SPIRIT LEVELS exhibition) of an entirely different character, and demarking growth from the other end of the realm of existence. Like the scales of dying skin, these “peeling” sheets of material evoke the degradation of materials as well as a wider sense of death and decay.

The tendencies indicated in these older works helped form a conscious overall concept and study process which led to the emergence of pioneering works, including in terms of utilised materials and processing technologies. Works by other artists at the start of their creative careers often express the burdens and sorrows of the world, which, over time, transform into a lighter and more joyous point of view. However, it appears Klára Horáčková’s works are evolving in precisely the opposite direction. And, as with every primary evolutionary phase, here, too, we see a start characterised by the simplest, even primitive, foundations. The coarseness at this stage pays no attention to a need to smooth out rough edges – for that is pointless – but, as we will see, the whole only comes into full fruition at the later stages of development. 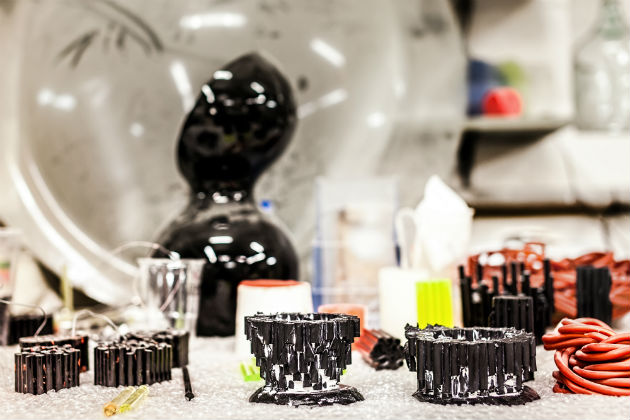 The green shoots once sprouting from the base of the bowl, carrying the secret of natural growth, have transformed into hard black rods projecting upwards, which no longer flail around in the gentlest of breezes; they are bound to towers, homes, buildings and other formations; they are rigid and petrified like basalt Devils Towers. This bleak Manhattan – a spatial composition known as “Evolution” (2017) – is situated on a table in the middle of the gallery. It is comprised of nineteen black sculptures reflecting the dark, brutal, all-consuming energy of the word as the centre of the galaxy. The work is dotted with small “sheaves” of coloured rods, which do not alter the overall immense impact, but rather serve as a surprising reminder that sometime and somewhere in the past or future, perhaps colours can or will exist. 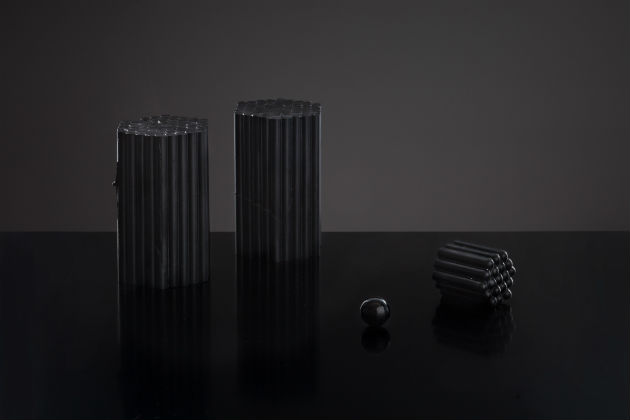 The author patiently and precisely places the black glass rods into her sculptures one by one. Only at the very top is a deviation permitted, where a wilting effect depicts a loss of energy as the tips veer off the vertical. But a small detail on each of the towers is also certain to catch the attention of visitors – a kind of frayed collar, which melds with its surroundings like a chameleon, but could just as easily be interpreted as a wing of some kind (the next phase of artistic evolution in Klára Horáčková’s work?) pushing its way out, and which, when the right moment arises, may use its monumental force to destroy the entire rigid structure around it.

This dark composition found its higher developmental level, and more elegant continuation, via two independent pieces created along the same principles of form, albeit in this case working with a contrasting play of black and white. “Evolution Black” is comprised of molten black glass, while “Evolution White” (2017) is made from molten transparent glass. The black sculpture is stirred from its torpor via the striking angled placement of its black antennas probing the surrounding space. The white sculpture, which maintains a more compact shape, radiates a softer more aesthetically pleasing aurora. Liberated from the darkness, it has blossomed; but an area of darkness remains, muddying the purity of the bright white form.

While the Evolution 2017 collection, situated in a central space in the gallery, is designed to express strict construction in the vertical plane of the kind that immediately seizes the attention of the viewer, a collection of three suspended glass pictures entitled “Artificial Landscape, I-III” (2017) will have something of a more delayed impact. They, too, are black, and come from the same artistic lineage – but nonetheless differ considerably. Perhaps it is the black colour itself; or perhaps it is the rows of glass rods, which have outgrown their existing opportunities, and are thus continuing into the next phase of evolution. The rods are aligned horizontally onto a smooth, shiny backing. The same stylistic deftness is evident here, too, as the rods effortlessly radiate in both directions, creating a rhythmic, pulsing sense. Add to this the tiny “residue” of added colour – something that merely passed through – which lost its saturation here in lieu of more muted tones. The mirror-like polished surface reflects the surrounding space – the lantern-like gallery lights, shadows, contours of figures, and the movement of visitor.

The pictures come to light, soulful and elegant, and urge visitors to a walk back and forth; to move closer and then again retreat, to determine what is actually occurring within them. The following statement by the author could offer some clues: “Many of my pieces express geometrical, optical, physical, and relational connections and phenomena. But I am also interested in sociological and human sentiments, even though that may not be as strikingly evident in my works. It is my means of understanding the world, and timeless, universal principles.”

Also unique is the very concept of the exhibition, which purposefully draws primary attention not to its apex, but rather to its first stage, represented by a silhouette of the central collection of almost primitively compact shapes shrouded in deathly darkness, so as to help foster a more genuine evolution of selected elements in the direction of their  harmonisation and incorporation into the higher spiritual whole, which is denoted here by glass pictures, representing the apex of the exhibition, as well as the current phases of “evolution, year 2017”  as viewed through the eyes of Klára Horáčková. 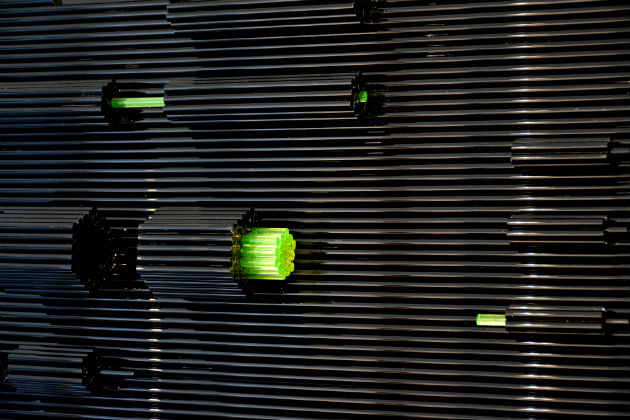 Irrespective of the labour involved, a study of form remains just a study, and no more. However, placing such efforts on display represents an act of courage, as the author opens up to outside analysis of both their artistic methods and viewpoints. For us, this slow and uncertain process of exploration is highly engrossing. Success is by no means ever guaranteed in advance, and each person must search for solutions from within. “I admire anyone who embarks on the path of artistic expression,” says Klára Horáčková. “It really is not easy work, and there is a prevailing uncertainty about whether you will even be able to succeed. A person needs to have a really deep sense of internal conviction and also a sense of necessity that this is precisely what they want to do. Every work has some kind of purpose or aim, and utilises various strategies to attain these. A person should be strict with themselves, but also kind, because excessive self-criticism can cripple the creative ability. And times should also arise when the author is able to savour a discovered principle, which can then be further built and developed.”

And it is in this spirit that the Evolution concept was undertaken and subsequently became the name of this exhibition. A new principle was discovered and developed. The glass pictures by Klára Horáčková, created on the basis of the evolution concept outlined here, will no doubt form part of future exhibitions, and be coupled with future works, by this promising artist. As with those works of years past, future creative efforts will undoubtedly serve as a fascinating and absorbing continuation of an ever-expanding higher conceptual whole.