HYPERLOCAL: MATERIALS AND THOUGHTS FROM A CRATER

Just one kilometre from Ljubljana’s main railway station lies a crater-like pit that formed when a group of army barracks were demolished and part of the site was redeveloped into housing. Over the course of almost thirty years, the unused space turned into an urban jungle. In 2020 the Slovenian Ministry of Justice leased the land, a plot somewhat larger than half a football pitch, to a community of designers, biologists, environmentalists, and artists free of charge – and they have transformed the site into a temporary creative lab aptly named Krater. 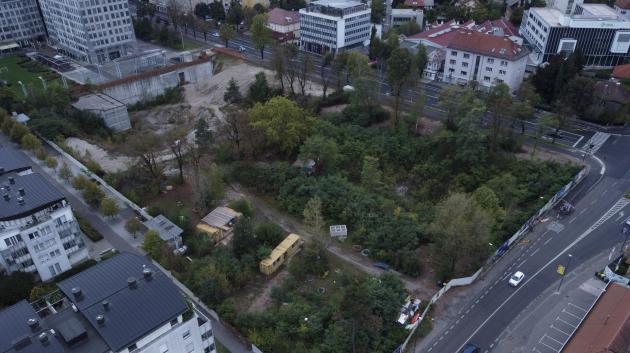 Krater is located in the Ljubljana neighbourhood of Bežigrad. Following the breakup of Yugoslavia in 1991, the former army barracks in Bežigrad were torn down to make way for residential housing. Blocks of flats and shops cropped up around the site in the 1990s. “Gravel was quarried here during construction, creating the crater that we see here today – and, in fact, our name,” explains Andrej Koruza, my guide and co-founder of the Krater community. The deep quarry pit clearly dominates the space; the remainder is covered with vegetation.

The project is run as part of RUK, a Slovenian network of research centres at the intersection of art, science and technology. The project is co-financed by the Republic of Slovenia and the EU’s European Regional Development Fund. Organisations including Trajna, the non-profit urban design studio Prostorož, the Permaculture Association of Slovenia, Agrodivizija, designer Rok Oblak, Sanctuary for abandoned plants and other associations and individuals contribute to running Krater. This diversity is evident throughout the site.

Prostorož is behind the architectural design of Krater. Several shipping containers were brought to the site; one is equipped with woodworking machinery, while the other is used for handmade paper making and paper pulp products. Under a lean-to one can find a Hollander, a cylindrical mill for beating cellulose fibres to make paper. 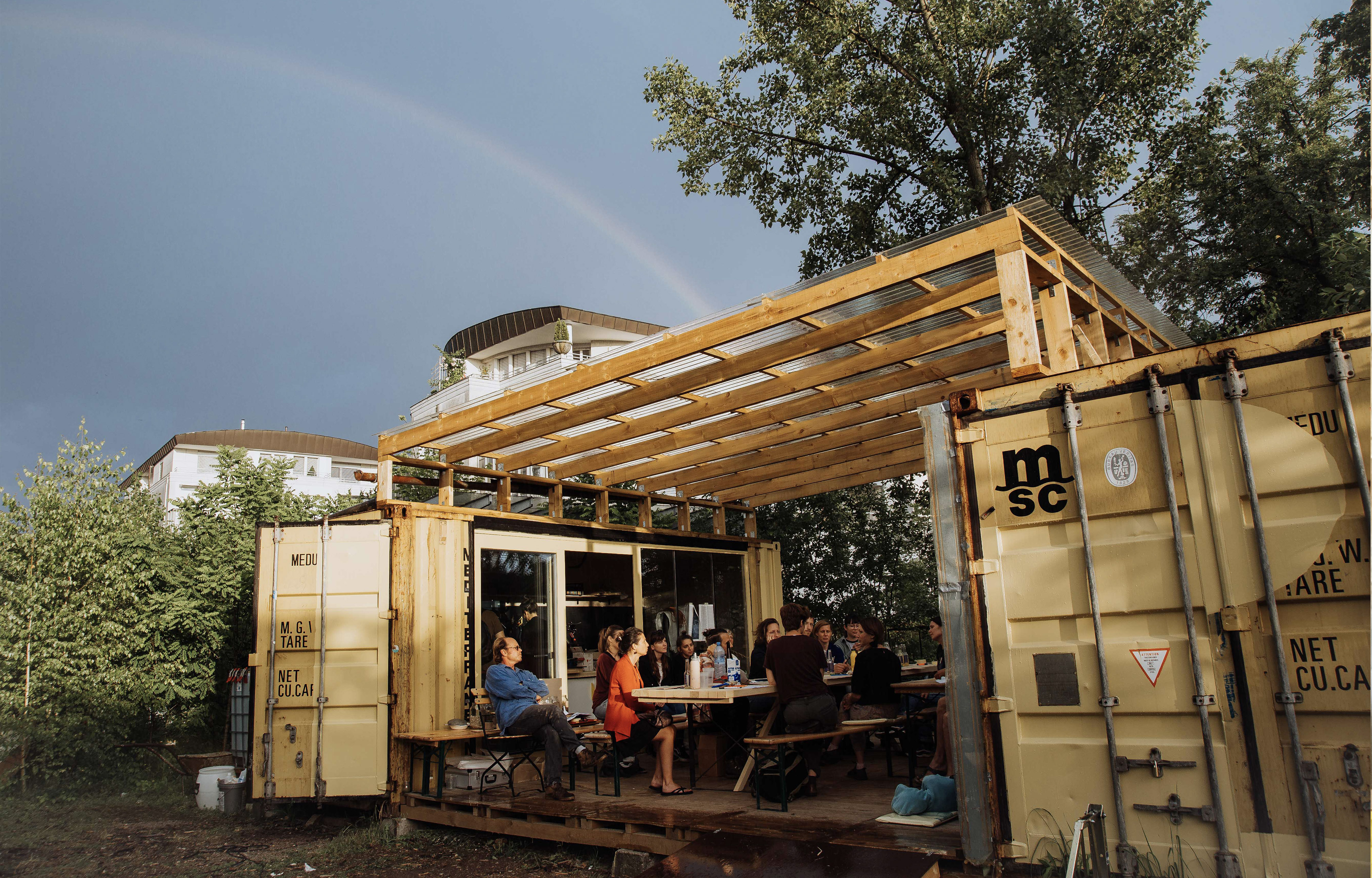 A covered terrace for lectures and workshops between the wood and paper making workshop at the centre of Krater. Photo © Amadeja Smrekar

Creative laboratory Krater was initiated by Trajna organisation as its founders say: “to give space for enactment of new regenerative practices in degraded urban ecosystems.” One of Trajna’s focuses is to develop creative proposals for invasive species management. Using biomass from invasive plants, Trajna produces Notweed Paper1. The name stems from Japanese knotweed, one of the so-called invasive plants. It comes from north-eastern Asia. The plant was brought to Europe in the nineteenth century and has competed with native species ever since. Trajna proposes a new discourse around invasive plants through producing paper, conducting other material experiments and engaging in diverse pedagogical activities in Krater.

Earthenware teacups and samples of rammed earth are spread out on a large table between the shipping containers. “All the clay that was used for cups was dug from the Krater site,” says Andrej as he disappears into one of the containers, soon returning with a mycelium box that cradles the teacup perfectly. Mycelium is a network of fine fungal hives that can grow under or on the ground. If mycelium is allowed to grow in a substrate, such as hay, it forms a relatively light composite material. Dehydration ensures that the material remains stable. It is biodegradable and because it is easy to form, it has the potential to replace polystyrene in a number of applications. 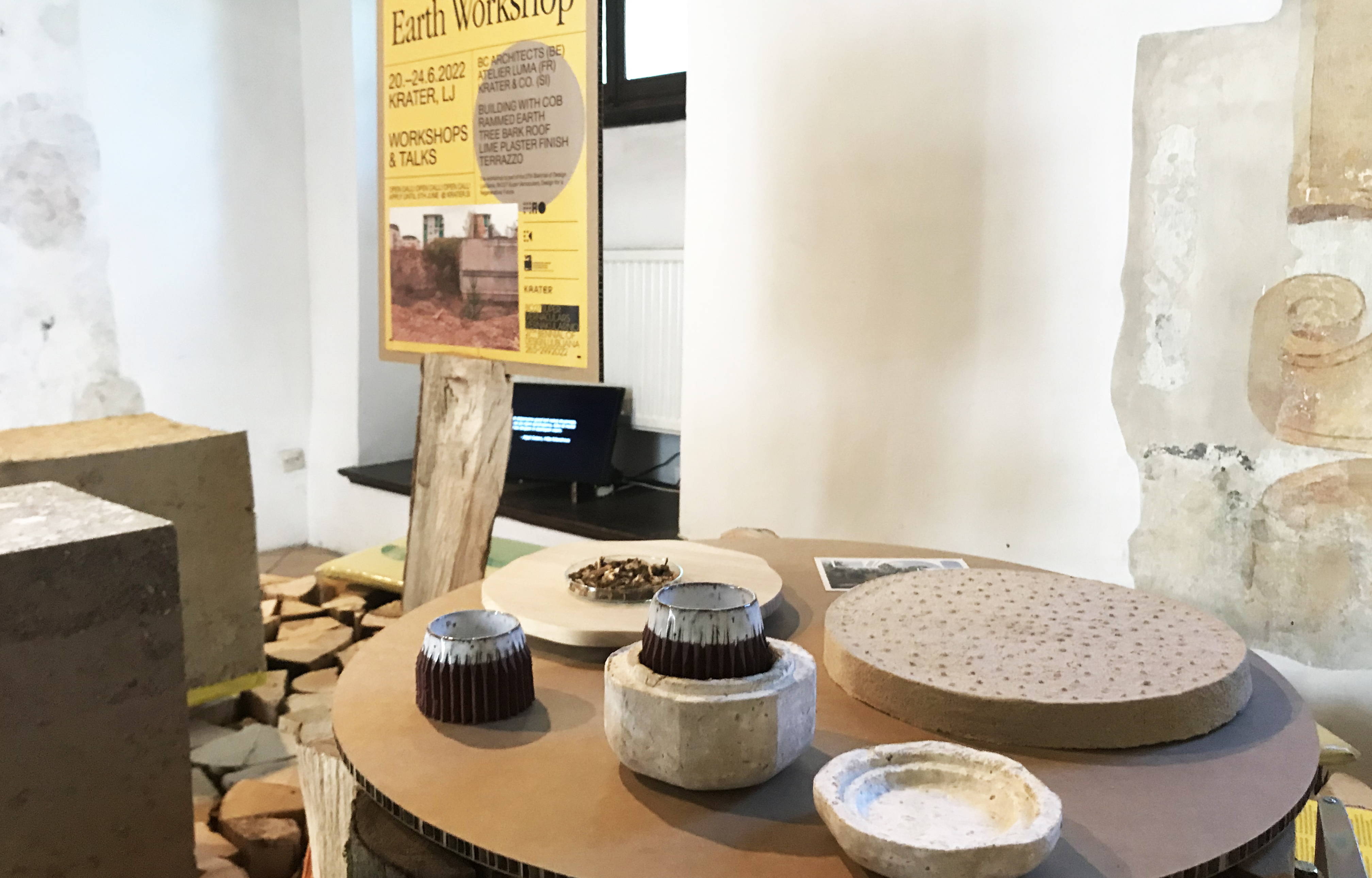 Krater was part of BIO27, the 27th Biennial of Design in Ljubljana. Photo: Valérie Záhonová

“We’ve even got a mushroom laboratory,” adds Andrej, pointing to another shipping container. In Krater microbiologist Primož Turnšek is focused on experimenting with mycelium. “We’d like to use heat from the compost to warm the myco lab,” notes Andrej. An enormous basket of compost is resting against the long side of the lab’s shipping container. A well-maintained compost pile can rise in temperature to over 60 °C. This heat is generated when bacteria in a compost pile break down biomass.

The idea of using heat from the composting process is not new. It is used as a way to warm greenhouses in winter. Krater collective would also like to test this idea. It is crucial to maintain a balance between the warmth taken away for heating and the warmth needed to keep the decomposition process going. To monitor this balance and regulate it remotely, they want to use smart technology at Krater and are currently working on a solution with an IT developer. The compost contains wood chips and chicken manure. The wood chips come directly from Krater, just the chickens are missing. 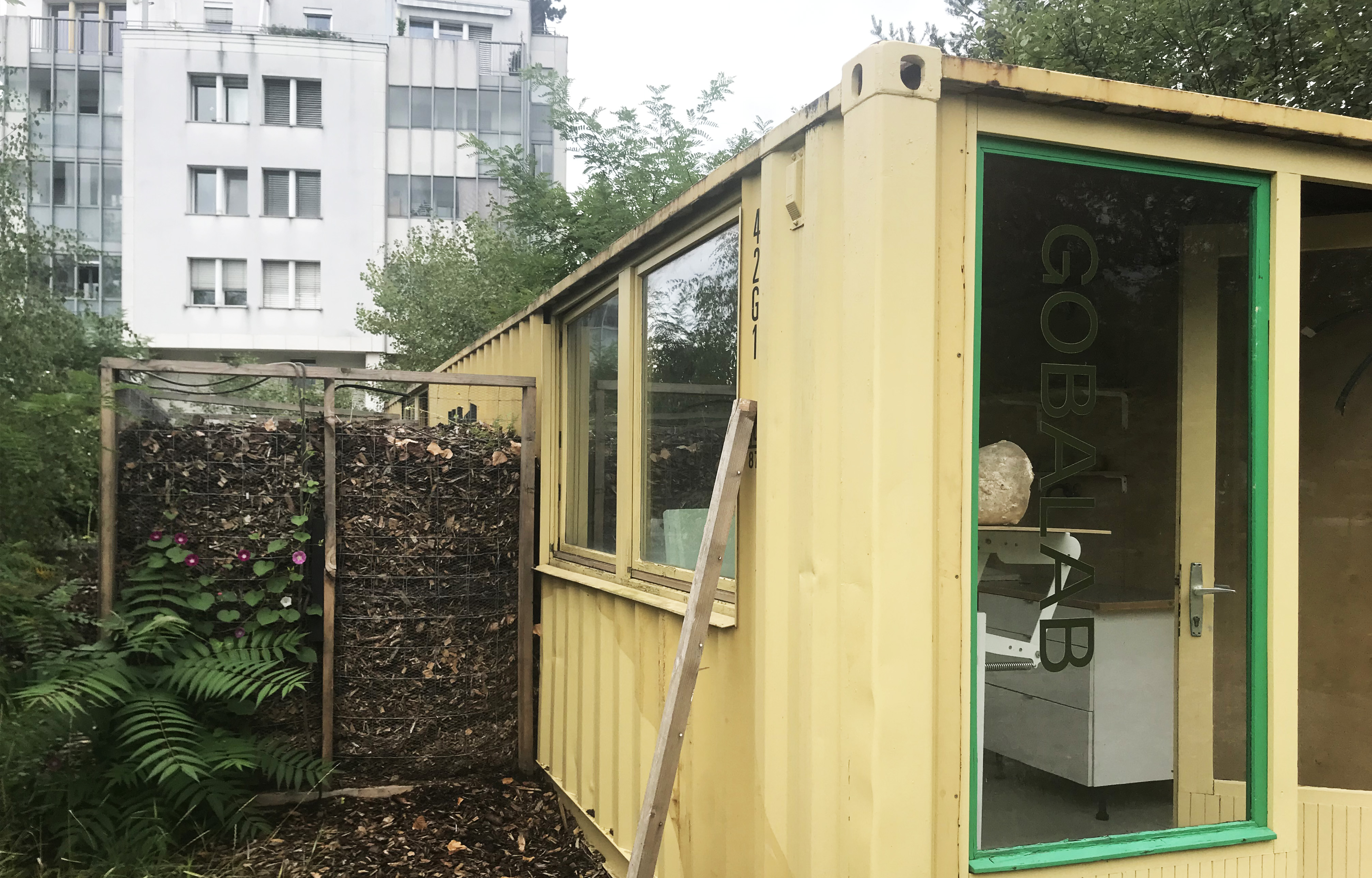 The mycelium lab. Future plans include using the compost pile (on the left) to heat the lab. Photo © Valérie Záhonová

A tea pavilion is one of the latest additions to the site. It was built as part of a summer workshop mentored by the design research laboratory Atelier LUMA and BC Architects from Belgium.LUMA researches the local cultural environment, natural resources, and know-how in Arles, France. BC is a hybrid practice, designing and undertaking "acts of building" towards systemic change in the construction sector. They all share a common focus with Krater. The tea pavilion at Krater was almost completely built from locally available materials. The structure features small beams made of invasive plants and a table and chairs made of rammed earth and cob which is clay mixed with plants – all from Krater. The only things that are not local are the shingles that are brought from the slovenian mountains 100 km away from Krater. The table in the pavilion has a small Holey Rocket stove designed by Rok Oblak. It could be called a hyperlocal approach, to use the closest resources with maximal respect and understanding of its surroundings, I guess. 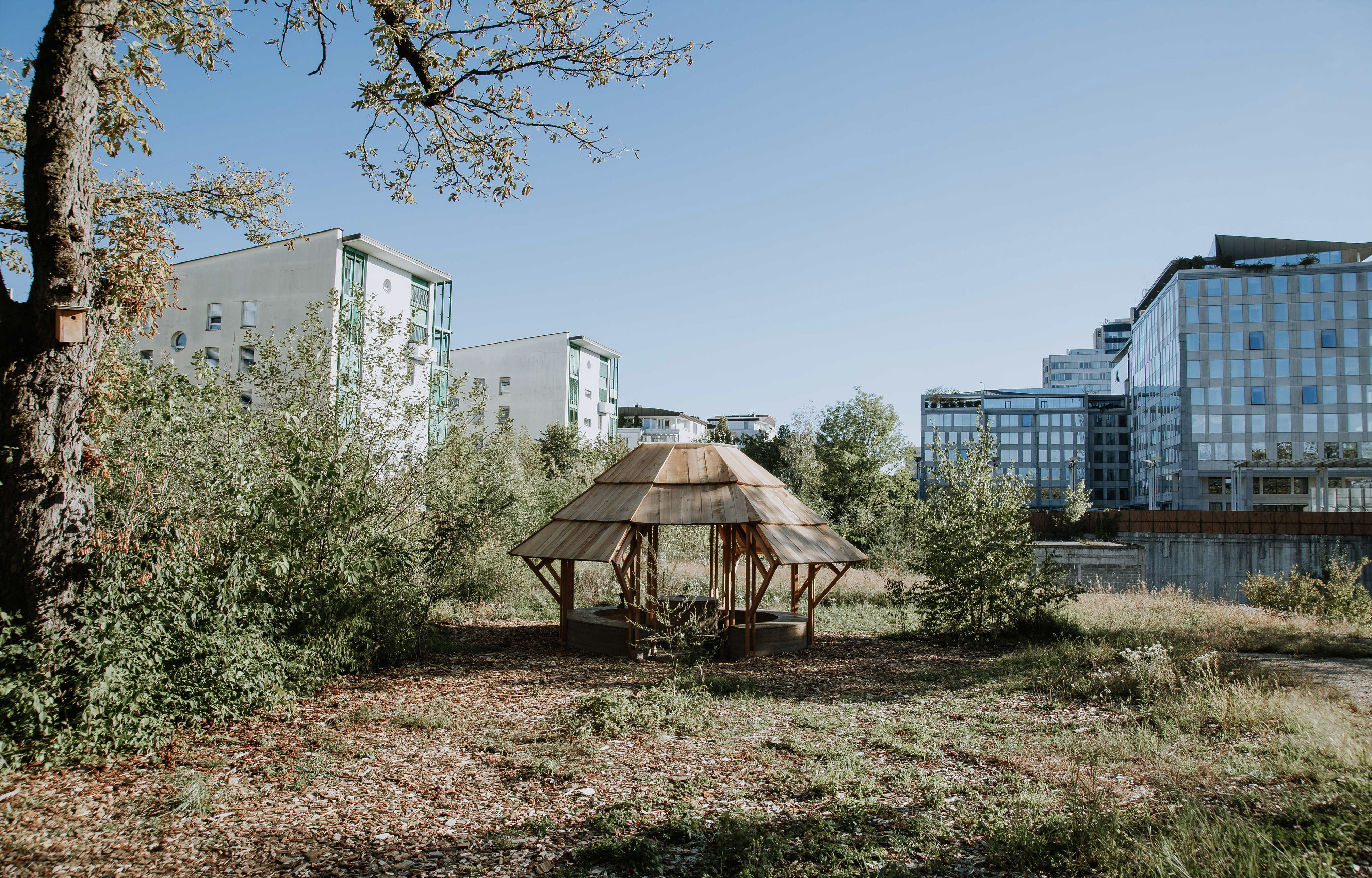 Me and Andrej chat about rammed earth, the material used to make the seats and table in the pavilion. Andrej tells me that in Slovenia, the use of local natural building materials is hampered by strict standards and long certification processes. “So local materials are either used illegally or replaced with imported certified materials,” he explains. I mention that Martin Rauch, an expert on using rammed earth in construction, told Material Times that “the greatest impediment to the further proliferation of rammed earth architecture is the existing rules and regulations that govern the construction industry”. Andrej is familiar with Rauch’s work, and he adds that as a follow-up to the construction of the pavillion, a tea ceremony and multidisciplinary discussion on natural materials and limits to their use will be held as part of BIO273. 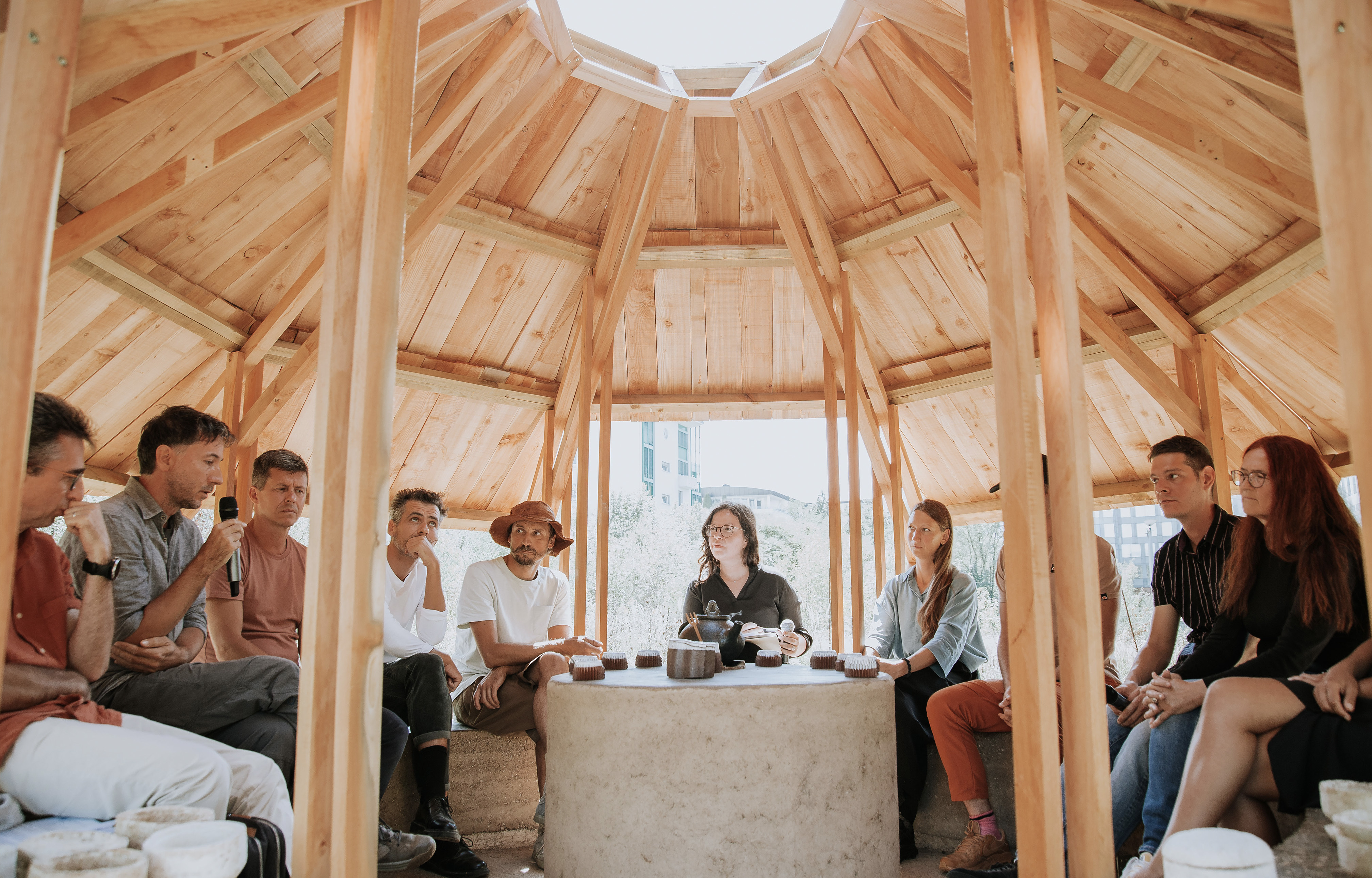 What future plans are in store for Krater? “The project will run on this space until the end of 2023. Until then, the space will be used for experiments with local materials and for meetings, discussions, and education. And then – a new courthouse is planned to be built here,” Andrej explains. For a while we debate whether the project will get stalled at the drawing board. That only seems natural, we joke. I don’t know if this sense of humour is shared primarily by people from countries that tried socialism, but in this case our pessimism is also a source of hope. Hope that Krater might enjoy a longer life as a place where people can meet and as a home for a sizable number of plant and animal species.

At some future date, the courthouse will serve human justice; however, designer and co-initiator of Krater Gaja Mežnarić Osole and architect Danica Sretenović curated The Feral Palace programme, a conference, which advocated for a more inclusive view of justice. Understanding other species or the entire ecosystem as subjects having their own rights is difficult, though4. In our society, non-human entities are considered first and foremost a source of materials and profits. It’s hard to imagine an alternative, but that’s what the team at Krater is working on. “It was the final act of our urgent action research, responding to the extinction of life on the site due to the new development plans of the Palace of Justice”, adds Gaja. The event was set to discuss the alternative multispecies imaginaries of the Krater site with a group of stakeholders: lawyers, architects, ecologists, landscape architects and others. (video link). 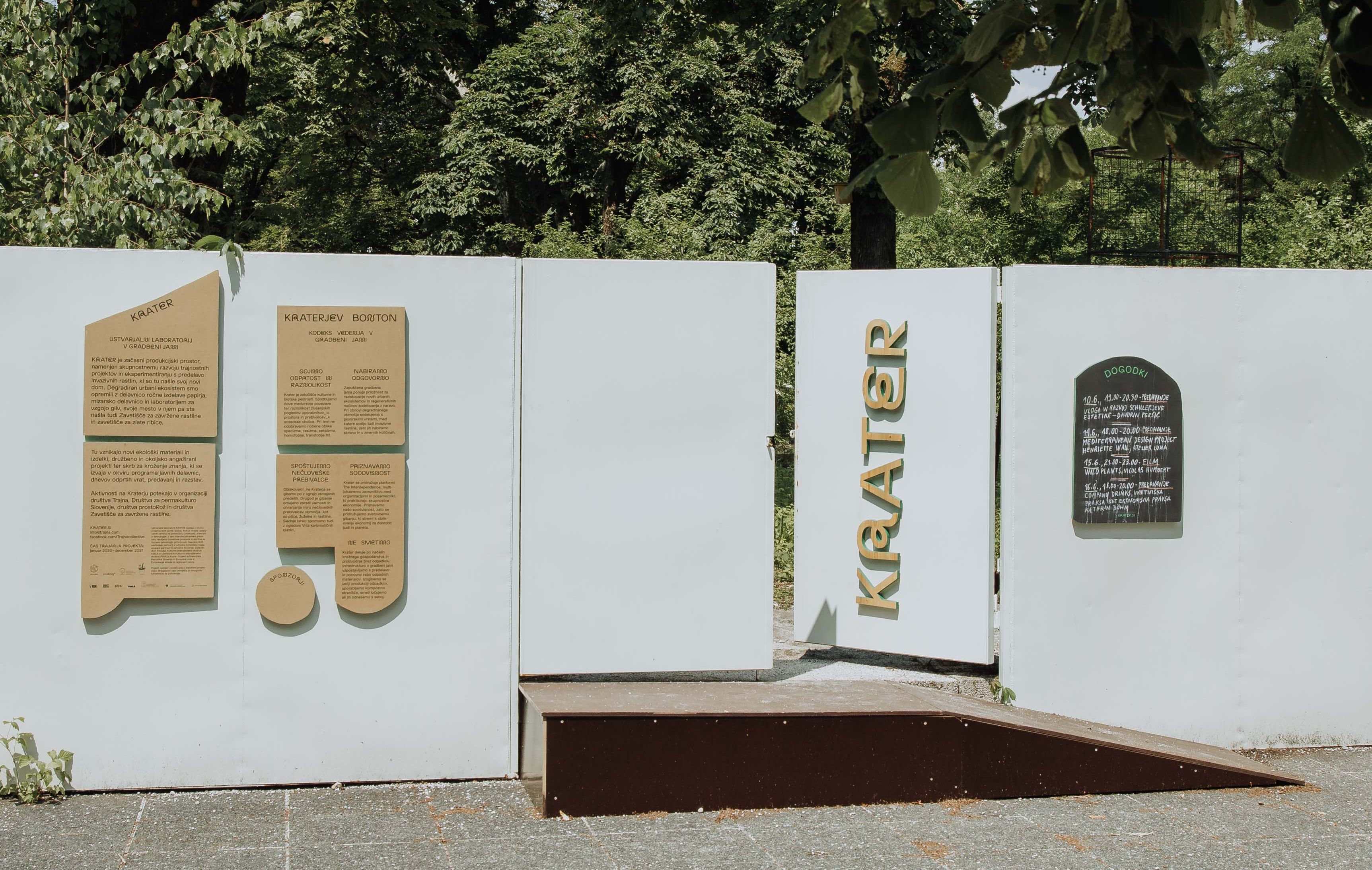 Krater is open to the public every Tuesday between 4 and 6 p.m. from April through November. Photo © Amadeja Smrekar

Krater is remarkable and inspiring. Fierce efforts to utilise the nearest resources and achieve harmony with the local fauna and flora are separated from the reality of the outside world by a brightly painted wall. When I leave, I wonder to what extent a hyperlocal approach can extend beyond the confines of an experiment.

In many areas we’ve probably reached the point of no return. The products and materials we use have become so complex, they cannot always be locally accessible to everyone. Localism in the digitally interconnected world is not, and cannot be, separated from global reality and knowledge. But both principles can complement one another. And I believe the greatest challenge lies in looking for meaningful balances.

1 Notweed paper samples can be found at the Prague showroom of matériO’, an information and education centre for innovative materials.

2 The basic principles of permaculture include observing and utilising natural life-cycles and relationships. This knowledge is applied in designing everything we need to live: to produce food and create homes, things, or systems that provide us with energy. Permaculture combines traditional approaches with modern technology, and its aim is to provide plenty without causing harm to people or the environment. In the broader sense, permaculture is a philosophy about seeking a balance between human needs and the needs of the ecosystem. The inspiration from permaculture principles is evident at Krater.

3 The twenty-seventh edition of Europe’s oldest biennial of design was called “Super Vernaculars - Design for Regenerative Future”. Its central theme was human knowledge and skills that inspire new approaches to design and architecture. The exhibited projects were connected by an effort to use creative ways to resolve complex global and local challenges. For more information: https://27.bio.si/

4 In 2014, the government of New Zealand declared the Maori land of Te Urewera a legal entity with all the rights, powers, duties and liabilities of a legal person. This created a revolutionary law not only in New Zealand, but worldwide. In 2017 New Zealand also granted legal entity status to Mount Taranaki and the Whanganui River.