Murano opens up its legendary glassworks to the world

Centuries ago, sea vessels loaded with the raw materials for glass production sailed into Murano. Ships departing these islands in Northern Italy were then loaded with cargos of precious glassware. Much mystery and mysticism has surrounded the production processes and artistry of Murano’s glassmakers. 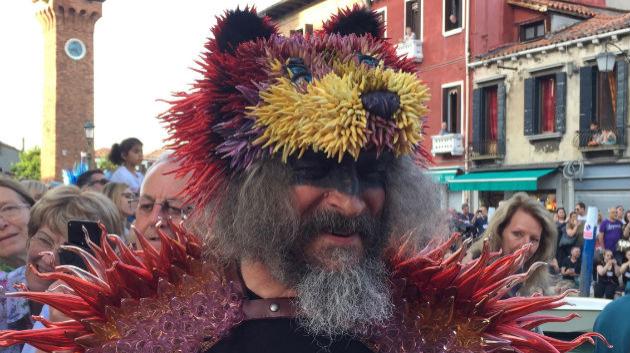 The Glass Art Conference in Murano also included a fashion show given by the participants, who wore their own glass designs (photo: Pavla Rossini)

But despite the strict ban on revealing such information, the knowledge, experiences, and skills associated with this particular form of glassmaking continues to spread – today Murano techniques form an inseparable component of this craft around the globe. And this legacy has enriched the entire glassware craft. It also continues to draw tourists to its source. This May, regular visitors to the narrow lanes and channels of the islands of Murano were supplemented with 1,800 participants attending the 47th Glass Art Conference.

The four-day event (from 16-19 May, 2018) saw glassmaking professionals of all varieties from around the world – including from the US, Canada and Australia – coming together in a single location. The attendees included maestros in the world of glassmaking and glass art, including experienced teams of glassblowers, glass artists, and suppliers of various materials, tools and other equipment needed for shaping glass (many such items were available for immediate purchase or order). Also at the event were collectors, sponsors and patrons of glass art, staff from museums, those who write about glass art, journalists, researchers and art historians.

The Glass Art Conference was held under the auspices of GAS (the Glass Art Society), a US non-profit, in conjunction with local Italian organisers. Although it was the 47th such conference, this marked only the second time it was held on European soil. The event was held around the grounds of the 14th century church of San Pietro Martire, which features paintings by the likes of 16th century painter Tintoretto and 15th century painter Giovanni Bellini. Numerous local volunteers situated outside the church provided a variety of refreshments; the spot served as the location of a number of formal and informal discussions, and also enabled networking among professionals in the industry.

Natali Rodrigues, the GAS board president who lives in Canada, introduced her first ever molten glass art creation to this author – to underscore how a past meeting with legendary Czech glass artist, sculptor and teacher Stanislav Libenský (1921-2002) had impacted her life. To this day, the large topaz-coloured bead serves Rodrigues as a beloved talisman. Students and other volunteers also oversaw visitor registrations, provided information, and distributed tickets to demo presentations held at glassworks and other workshops. In many instances, visitor space was limited, leading to the most passionate arriving very early and waiting in queues.

A large stage featuring expansive screens and a tiered auditorium with several hundred seats served as the central point of the San Pietro Martire grounds. And it was here that the most notable events, talks, panel discussions, and presentations of artworks took place. Dutch glass artist and furnace-maker Durk Valkema received an Honorary Lifetime Membership Award from the Glass Art Society at the event. The Visionary Award went to American glassblower Benjamin Moore, whose efforts as a teacher have helped to disseminate Murano glassmaking techniques. And the Lifetime Technical Achievement Award – Premio postumo was awarded posthumously to legendary molten glass sculptor Pino Signoretto, who died suddenly at the age of 74 on December 30, 2017. Signoretto’s equally talented sons gave a demo presentation in their father’s honour. Finally, the Lifetime Artistic Achievement Award went to Murano-born glass artist Livio Seguso. With a career spanning fifty years, Seguso has evolved towards minimalist sculptures; he is a regular participant at the prestigious Venice Biennale (La Biennale di Venezia) exhibition. 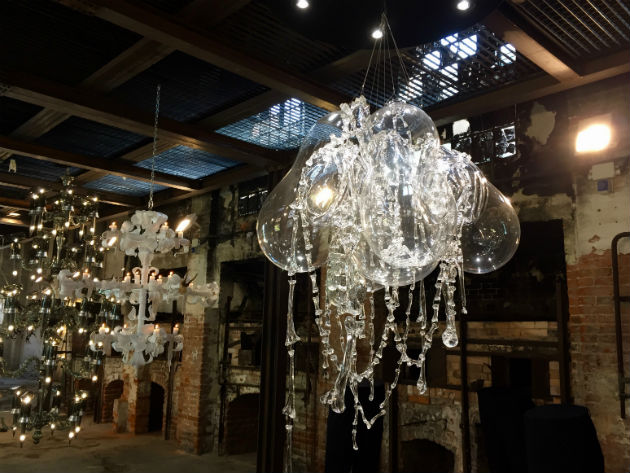 Many glassworks – otherwise fiercely protective of certain production techniques – opened their doors to visitors. For example, glassmaker Venini offered visitors the chance to see a glass maestro create a legendary – and oft-imitated – Fazzoletto-style vase resembling a squashed handkerchief. Another glassmaker blew a single-piece hourglass. Meanwhile, glassmaker Barovier & Toso enthralled spectators by showcasing a virtuoso hand-shaping of  a chandelier arm. Their private museum, which features, among other items, the Barovier Wedding Glass Cup, attests to this family’s heritage in glassmaking as far back as the 15th century (glass artist Angelo Barovier lived during this period). The small Albertini & Spezzamonte family workshop continues to paint and guild replicas of this cup – one of the last firms still undertaking this almost lost craft on the Murano islands. Many other sample rooms and showrooms also presented testimonials charting years of collaboration with the world’s top artists and designers.

Legendary Venetian glass artist and maestro in Murano techniques Lino Tagliapietra showcased his artworks both on the main stage and also at the smaller Nason Moretti glassworks, assisted at the latter by his American team with whom he patterns glass in Seattle. On occasion, the maestro could hardly conceal his frustration as his assistants failed to properly prepare the necessary equipment as usual in advance; indeed, their conduct was visibly unprofessional, and the public had to intervene on several occasions.

Danish-born Tobias Møhl is a student of Tagliapietra, and one of those protégés able to not only expertly learn the techniques of his craft, but also to apply a minimalist morphology to develop the most  challenging traditional filigree ornamentation and delicate techniques such as reticello, pastorelli and others. Along with long-term partner Trine Drivsholm, Møhl demonstrated his craft at the Effetre glassworks. 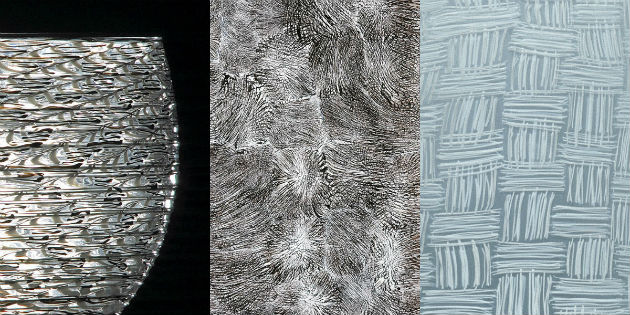 And Czech glass artist Petr Novotný demonstrated his considerable skills, ably assisted by son Ondřej and fellow artist Martin Janecký. Novotný’s customised glassmaking technique, in which the end product quickly grows “from the artist’s own hands” was far more important for observers to see than the finished product. And like any true glass maestro, he was easily able to adapt to the specific properties of Murano glass – its composition means that Murano glass remains workable for a longer period than so-called “short” Czech glass. This meant that the second scoop of molten glass onto the blowpipe required a slightly longer wait, and the finished work went into the cooling oven later so as to prevent deformation.

Aforementioned Czech glass artist Martin Janecký also excelled in his own right, demonstrating his craftsmanship and artistry through the shaping of molten glass. Janecký’s ability to create realistic portraits from such glass meant that his presentations became the must-see event of the conference. Working four hours outdoors under the bright sun was far from easy, particularly since the daylight restricted the glassmaker’s ability to visually estimate the temperature of the shaped molten glass. Janecký’s assistant found it particularly exhausting, having to hold 10kg of molten glass on his blowpipe on an already hot day, and having to constantly heat the glass, even though it was so-called “black”  molten glass, which remains viscous for longer. Another member of the team poured water over the blowpipe, enabling Janecký to get as close as possible to the centre of the work with a special pair of tweezers, and without the need for protective gloves. Standing ovations from the gathered audience served as ample reward for all the effort. 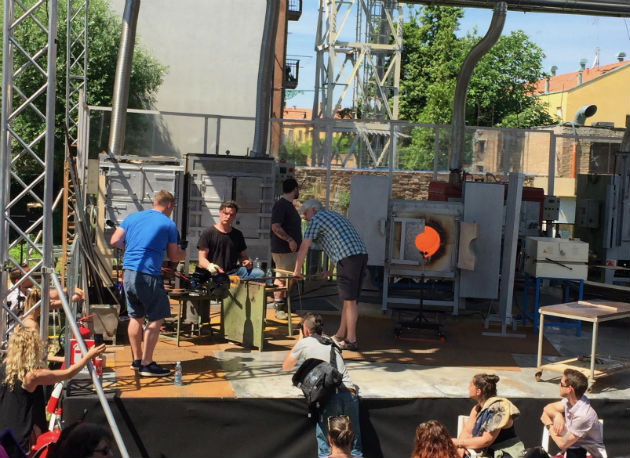 Martin Janecký utilises a technique known as inside sculpting, which proved to be among the most popular presentations at the GAS event (photo: Pavla Rossini)

Additionally, Italian glass artist Lucio Bubacco, known for his expertly created and somewhat surreal figurine depictions, worked with his forearms raised. Several assistants helped to heat individual glass components. Despite the considerable heat, an order went out for all windows to be closed in the inside workshop after a draught caused some individual components to detach. 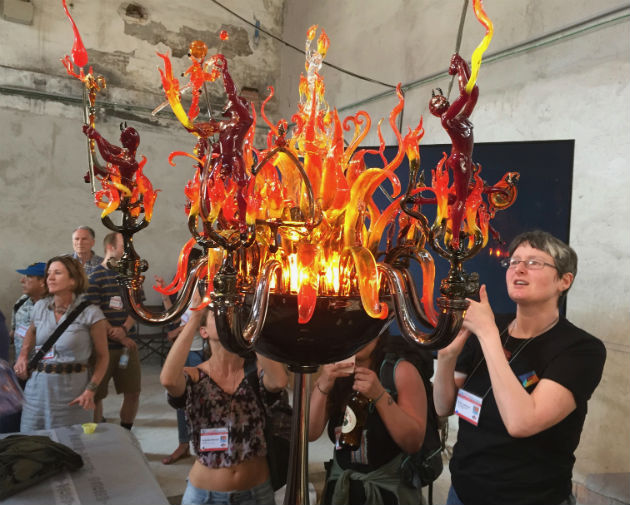 The 47th Glass Art Conference came to a Murano that had experienced a notable commercialisation of the craft over recent decades – leading some to grumble that Murano glass had mostly become little more than a kind of fake “Made in China”. But the GAS event   did much to set the record straight. Returning from the islands back to Venice on a local vaporetto (water bus), visitors carried with us many reminders that the walls of Murano’s seemingly abandoned glassworks in fact still contain much fascinating tradecraft,  kept alive and cultivated for centuries, and still able to adapt to modern circumstances and artistic means of expression. Clearly, the future possibilities of glassmaking are as limitless as those of the past; the craft continues to blossom, expanding into countless new corners of the globe, guided by an eternal sense of human curiosity and creativity.