Arranging a meeting with René Caran is far from easy. As a result of his RENSPOL floor studio situated in the western Bohemian town of Karlovy Vary, Caran is often on the road installing floor parquets – both modern and traditional. Sometimes he works for pleasure – as part of efforts to prevent the decline of old-fashioned parquet flooring traditions. 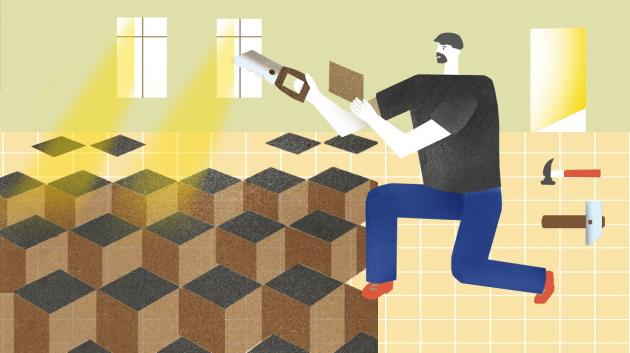 Several years ago, René Caran founded Workcamp Parquet (WP), an international project of voluntary parquet floorers who meet once a year at a pre-selected European location in order to add new flooring to a particular site. This year, that location is Brzeg Castle in south-west Poland.

What led you and your colleagues to establish Workcamp Parquet?
Previously my company and I had partaken in various international competitions. But for us the negative aspect of these was that they would often be won by craftsmen from countries that benefited from better levels of education. Which means that we lads from the Czech Republic, or from Romania, or Poland could never make any headway. It wasn’t that we were worse in terms of our craftsmanship, but rather that other countries benefited from far more intensive education systems, had better equipped schools, and thus possessed an advantage compared with the countries of the east.

And the second reason...?
The second reason was that we didn’t want to just be complaining about the existing state of affairs – and so we started to do something instead. One of our goals is for older people who know the craft, and who understand the traditions, to impart these to younger generations. The fact that we carry out work in castles or other such interesting locations enables young parquet-makers to familiarise themselves with techniques that they would rarely, if ever, encounter in their normal day-to-day lives. That is the educational component.

Innovation is another component. WP uses the most modern equipment and materials, enabling everyone to test these out in a genuine hands-on situation. The third principle is innovation. We want young people to be able to discover that if they acquire the correct skills they can also make a very good living. But primarily we want them to know that they have someone to whom they can turn, because WP is cultivating a network of likeminded people who enjoy and understand their profession. 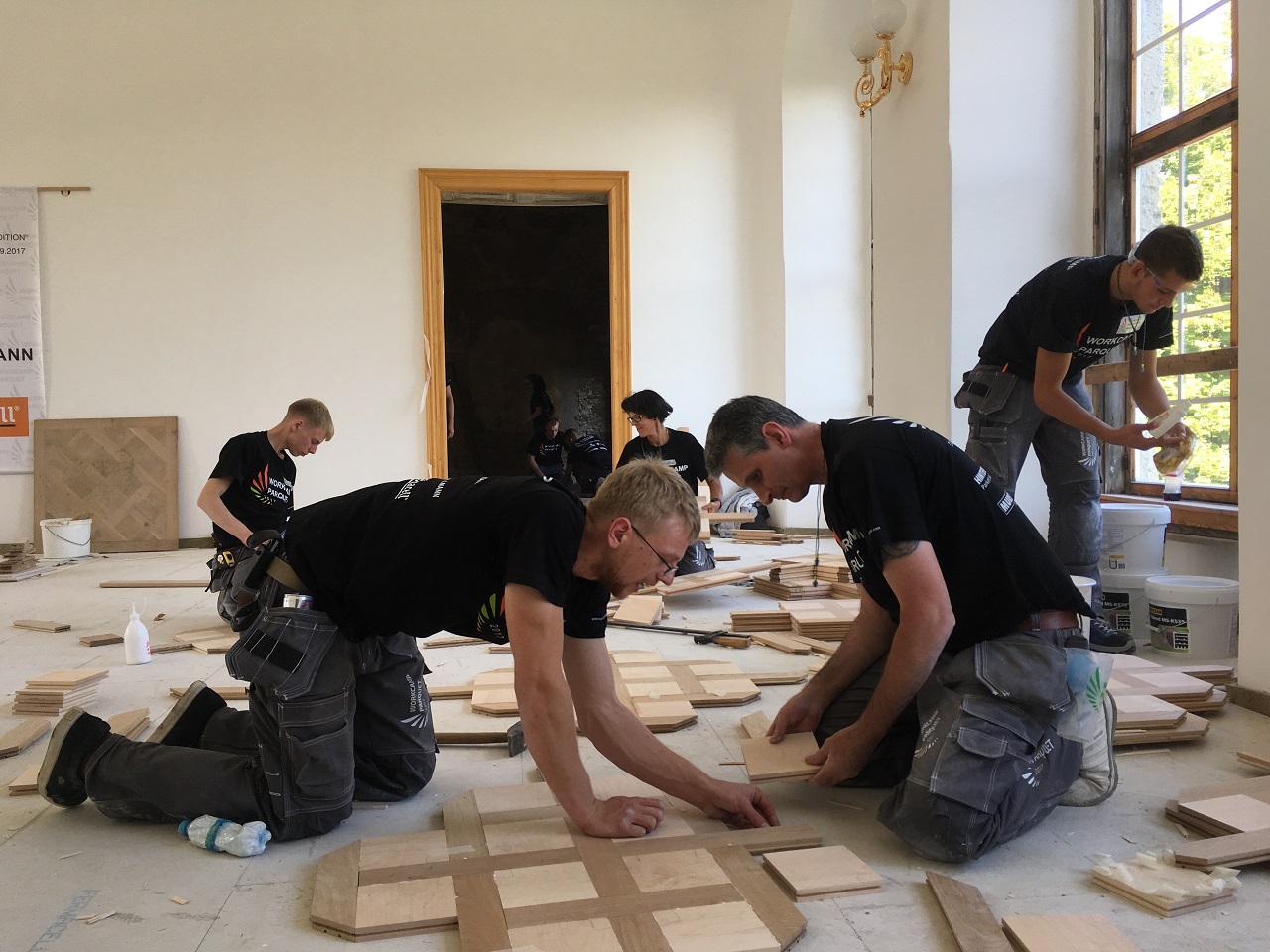 Members of the Workcamp Parquet at work. Creating a Versailles-style parquet pattern in the Grand Hall of Dahlen Castle 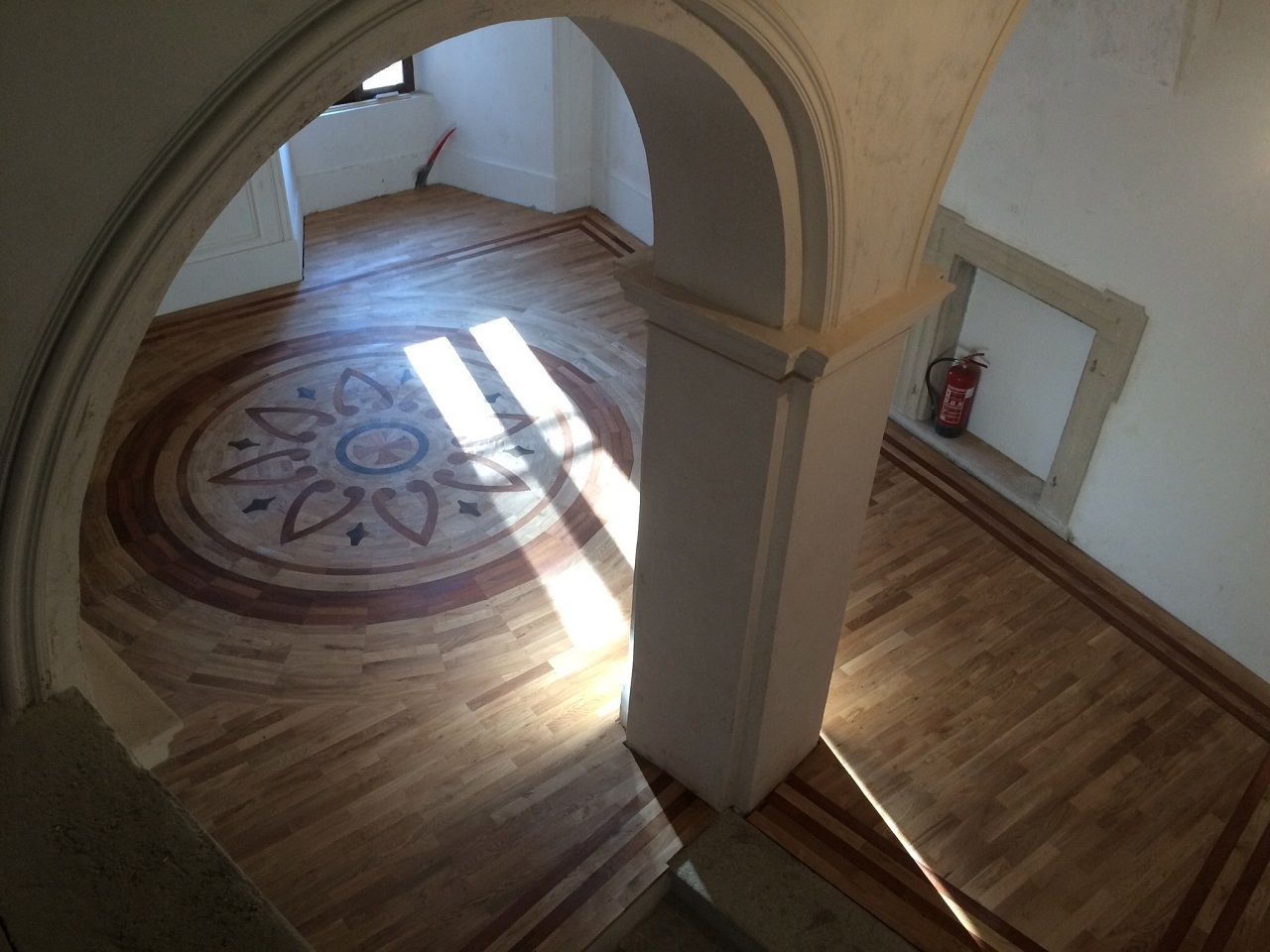 A parquet pattern copied from terracotta. WP 2016 at Libá Castle in Františkovy Lázně

In WP’s promotional video, parquet floorers are stylised as some kind of team of tough action heroes arriving at the scene in their uniforms! How does Workcamp Parquet work in real life?
First we select a particular location that must fulfil a number of criteria. We always reach an agreement on the work a year in advance – this is our fourth year. We then bring a certain number of wood pallets to the site, and then create and lay custom parquet flooring. That takes a week. Asides from the work itself, we also organise expert seminars, workshops, lectures and other activities for the participants. And then, on September 8, during European Heritage Days (EHD), we formally hand over the floor. That is a rough birds-eye description of the process – although behind that is essentially a whole year of work and preparations. The WP itself merely represents a culmination of that.

Do you also factor-in historical conservation issues?
Our work camp isn’t necessarily strictly associated with historical preservation sites – although we did emphasise this at the start for marketing reasons. The purpose of the event is that we select a building which should in some way be of significance to the local community – it could be a historical site, but also, for example, a public building. We then install new flooring, which stays in place and increases the value of the property. But at the same time, it must be a floor from which the work camp participants can learn something.

For example, two years ago, we created and laid parquets in the Versailles style at Dahlen Castle in Germany (in northern Saxony). This created a major media firestorm, which in turn led to the town being able to find a sponsor to cover the costs of stuccoing the castle’s entire main hall. Add to that a factory was found that made expensive chandeliers, and they offered the castle the permanent loan of a chandelier. This chandelier is made of gold, which meant that the town had to increase its insurance of the castle site. The end result of all this was that Dahlen has begun using the renovated space for balls and ceremonies. Naturally, such an outgrowth stemming from our project pleases and further motivates us, albeit it requires the interplay of many fortuitous events. Our company and a few colleagues organised the WP project, and our goal is to simply install parquet flooring. If that then leads to further renovations at particular site, then all the better... 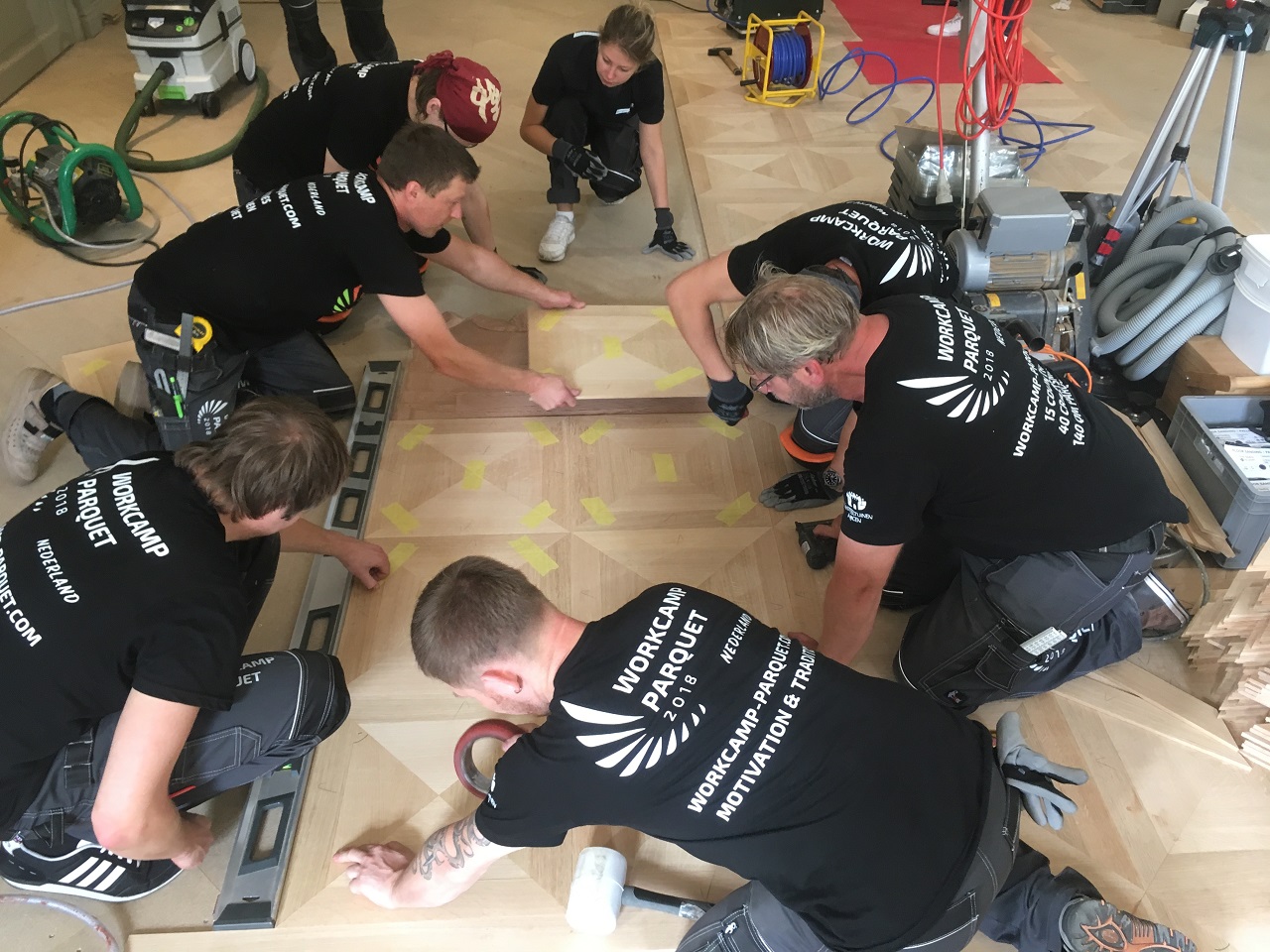 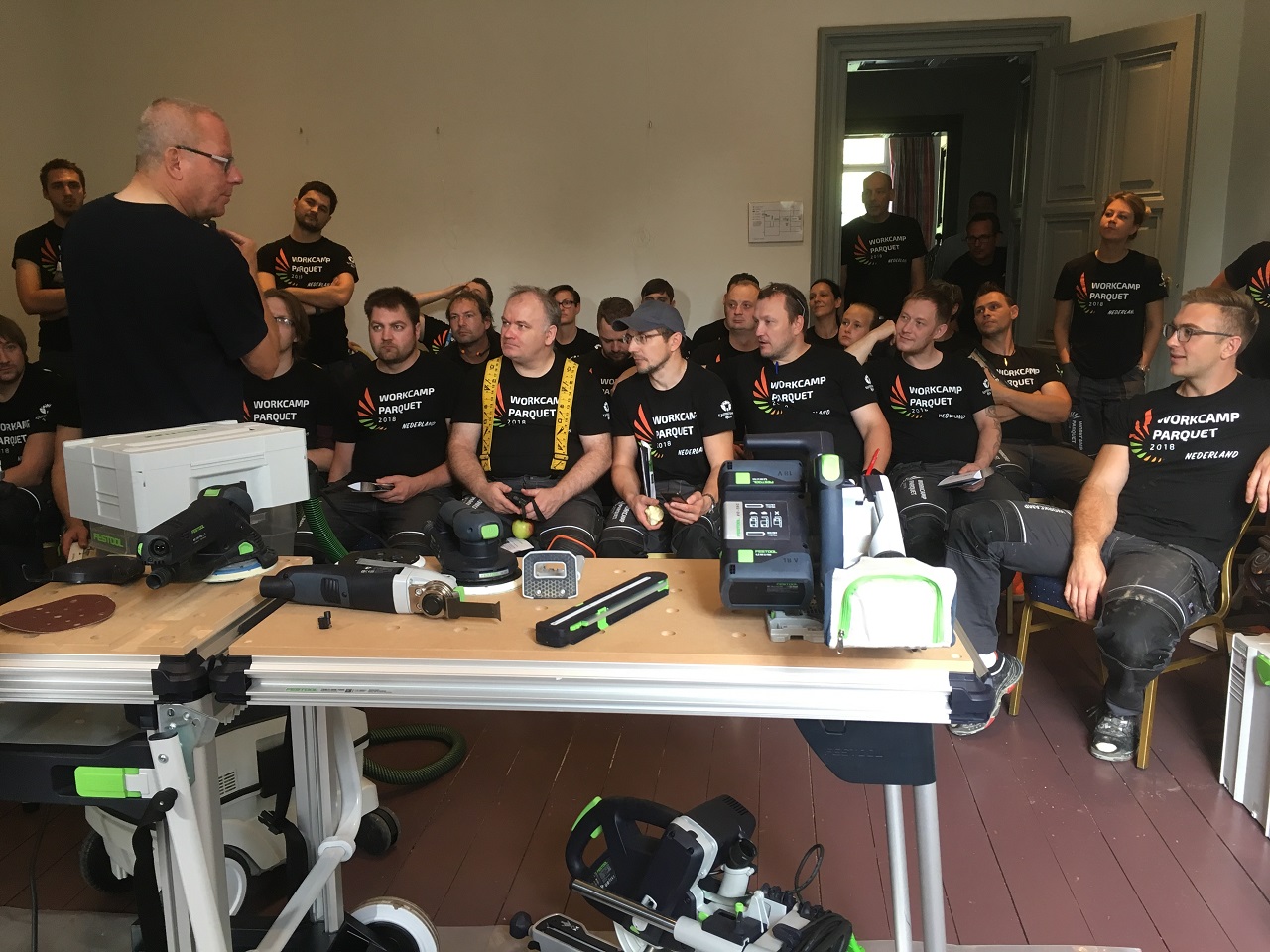 So the core of WP is a constellation of young craftsmen, who gain experiences and knowledge from their older colleagues – how many of you are there?
We always had about thirty-five. This year we doubled our capacity, meaning that for our upcoming trip to Poland around sixty participants from 21 countries will be coming together. We couldn’t say “no” to our colleagues from Australia, the US, France and other countries.

The team is always comprised of parquet floorers of various age groups. The more experienced members – that doesn’t necessarily mean the older ones – impart their skills and experiences to the more novice members. Expert craftsmen from places as far afield as Russia, Poland or the Netherlands attend the WP. All are experts in their craft and carry out the kind of quality work of which we dream about here. As an example, they restored a floor in St. Petersburg’s Hermitage Museum.

So, in essence, the WP is a kind of enlightenment initiative...
Yes, the teachers are maestros at the top of their profession, which is why they seek to share their skills with others. And this is helping to cultivate a huge international community. Each year we are seeing increasing interest from craftsmen to participate. For us, it represents a challenge, as each year we must completely install parquet flooring in a short space of time, and often with people whom we have met for the first time.