On the first sight, the exhibition of glass works by Lada Semecká in the Prague based Galerie Kuzebauch evokes simplicity, even modesty: Small, fragile-looking objects combining blown and flat glass with unglazed porcelain are accompanied by glass panels evoking visions of the sky – Moon and the clouds passing through… Perhaps that is why the exhibition is entitled Haiku – reffering to the short lyrical genre capturing the instantaneous, regardless of its everyday nature. The elusiveness and singularity of various moments described in haiku is to a certain degree, one of the layers that are at work in Semecká’s pieces. One only needs to take a closer look to notice infinite small details, various airflows and water currents captured within Semecká's pieces, one enters inside the texture and structured layers of  their surface. 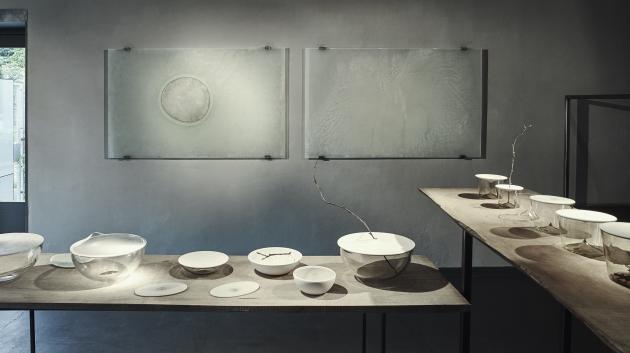 Semecká’s objects are united in an absolute, calculated precision – through her collaboration with Petr Lada (who helped her with manufacturing the porcelain parts of her works), she creates small areas of contemplation, providing her audience a space within the gallery to experience the full emotional impact of her works. Walking through the exhibitiom feels as if one was taking a walk in an unusually beautiful countryside. In the following interview, Lada Semecká talks of her love for silent contemplation, her relationship with nature and the abstract thoughts, concepts behind her works.


One could say that there are two distinct types of works in your latest exhibition. Firstly, there are glass paintings from fused glass, evoking the skies, clouds or the moon on a milky background. On the other side are your works composed of smaller blown objects – combining porcelain with glass engraving. Do you feel a difference between these two approaches?
For me, my works are composite whole, through which I explore their different possibilities. There is nature and landscape at work in both, explicitly in the mind of the audience. 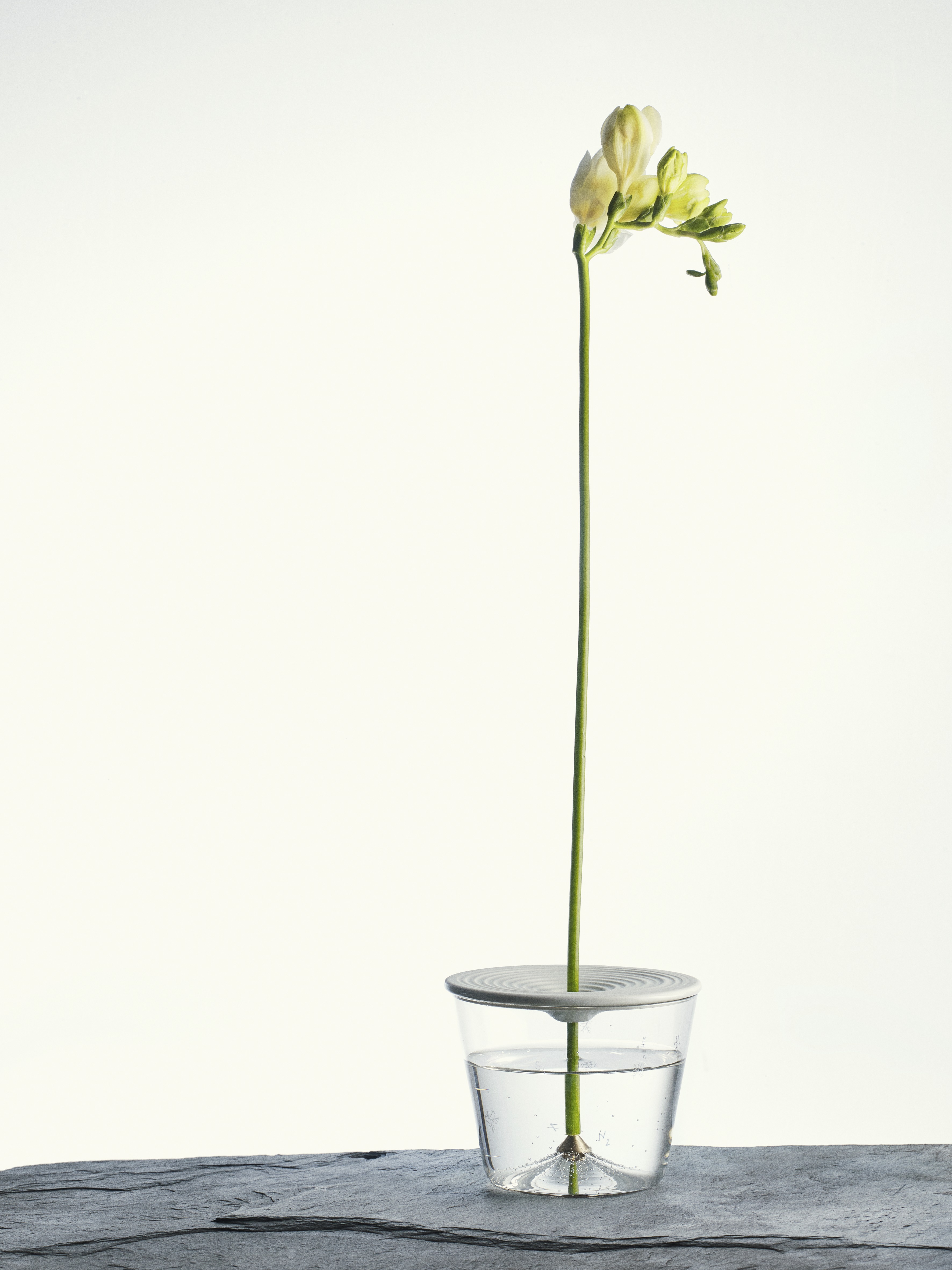 " I wanted to create something that would evoke winters with an abundance of snow, Japanese winter"

In Galerie Kuzebauch one can often see works by artists that work with contrasts – I feel I can't say that is the case with your work. Individual pieces may be different, but they are never in opposition to each other. Rather, they are involved in a conversation; either with the medium or your themes. There is always some underlying idea behind them. What interests me is the way you work with different materials. You often work with other artists – that means your creative process is often about conversation too. Just like your combining of glass with wood and porcelain. What is the primary impulse behind this and how does it change during the creative process?
Perhaps you are right, the different approaches I take are not in opposition to one another. Rather, I’m trying to capture moments of their harmony. What binds them together and what connects them to what I feel.

The primary impulse for my work with different materials came up to me when I was working on a project called Sound Calligraphy, in which tried to study the acoustic qualities of different materials. I worked with materials that are musical in a specific way, non-organic, non-metal. The kind of materials that are similar to glass in that they come from rock or lava. One such material is porcelain. I had a funding for the project and worked with basalt foundries and factories that produce sanitary ceramics.Because of some technical difficulties in making refractory beels in the Ideal Standart factories, I met Petr Lada. He was able to deal with the problems I was facing in his studio in Prague and eventually helped me produce several porcelain bells. Through him, I was able to get to know the material closer, understand its visual potential. A year later, I was thinking how to use water for my upcoming exhibition Rivers, Brooks and Puddles. It was only a step from my old theme of Water, Ice and Snow. In the past, I used clear and opal glass to achieve various ice-like effects. In order to achieve the visuality of snow, I used glass crumbs. This time, however, I was stunned by the effect of glass combined with porcelain. I think it originates from the drought of these past few years, the absence of snow in recent Czech winters. I wanted to create something that would evoke winters with an abundance of snow, Japanese winters, where the plants and the soil are covered by an ever repeating cycle of snow thawing, leaking into the soil below. They have very good rice in Toyama precisely because of the excellent quality of water from the Japanese Alps. We don’t have that in Czech Republic, its dry in winter too. There is only the greyness and barren trees. I suddenly found myself missing the whiteness, the fresh air and the silence of snow when it falls down, the sound of flowing water or when the light shines and everything white melts into poodles that drain into moss… I often think of these opposites: the dry and the wet winter, or even one winter that is a little different from the others. Or even the way these things are in balance with each other…

Various relationship and interconnections between worlds is what I find interesting in people too. I often wonder how people think and work. In Petr’s studio, I noticed these spiral motifs stemming from the very process of making ceramics on the pottery wheel. At that time, there was an exhibition in the National Gallery, with a catalogue entitled Imprints of Consciousness that had works of Edmund de Waal in it. I was deeply moved by them. Also, there were crosses everywhere in Petr’s studio. They represent symbols which I used earlier in my life. Suddenly, they started posing questions to me again…

The exhibition is entitled Haiku. This short lyrical genre is specific in both its form and content. It could be compared to the European sonnet, because it also contains a part called volta, a radical rhetorical shift in meaning. One could also say that your works resemble these very principles – they appear calm and steady, but always include an element of surprise, disturbing the proverbial water surface. Within the exhibition, this is often done through your work with engraving. What is the story behind it? And where do you find sources for inspiration?
I think it is a certain picturality of abstraction. When I’m thinking of how certain things work, I look for the most simple ways to capture certain principles. My abstractions were never parts of simplified shapes or motives. Rather, they always originated from my thoughts on the inner mechanisms of certain things. Glass engraving was on the very beginning of my career. It has a certain power (contrary to cutting for example) to capture exact realistic stories. How does one work whit these motives while thinking of abstract things? It feels as if one walked through landscape while looking far into distance, or under your feet, not paying attention to anything but your thoughts or the rhythm of your walk. But then suddenly, you notice something…

In Japanese art, such as calligraphy or gardens, empty spaces play crucial role. I think emptiness stands for a certain state of mind. An experience. Neither silence nor an empty spaces are real. Neither is a straight line. Professor Kopecký used to tell us that there are no straight lines in the universe, even light rays are curved by the forces of gravity. I often come back to this idea. It is the same with silence: should we enter a completely silent space, with no surrounding noise, we would hear our own heartbeat. When the heart stops, does that mean we enter silence? Who knows… That is how things work for me. Silence, straight lines, empty spaces, these things are ideas mere ideas, not real things. Our experience of the world is limited. Even so, I think without experiencing these things, we would not be able to think, to perceive… Nor would we need it. Isn’t it odd how thoughts of the absolute, something that transcends us, come to us? 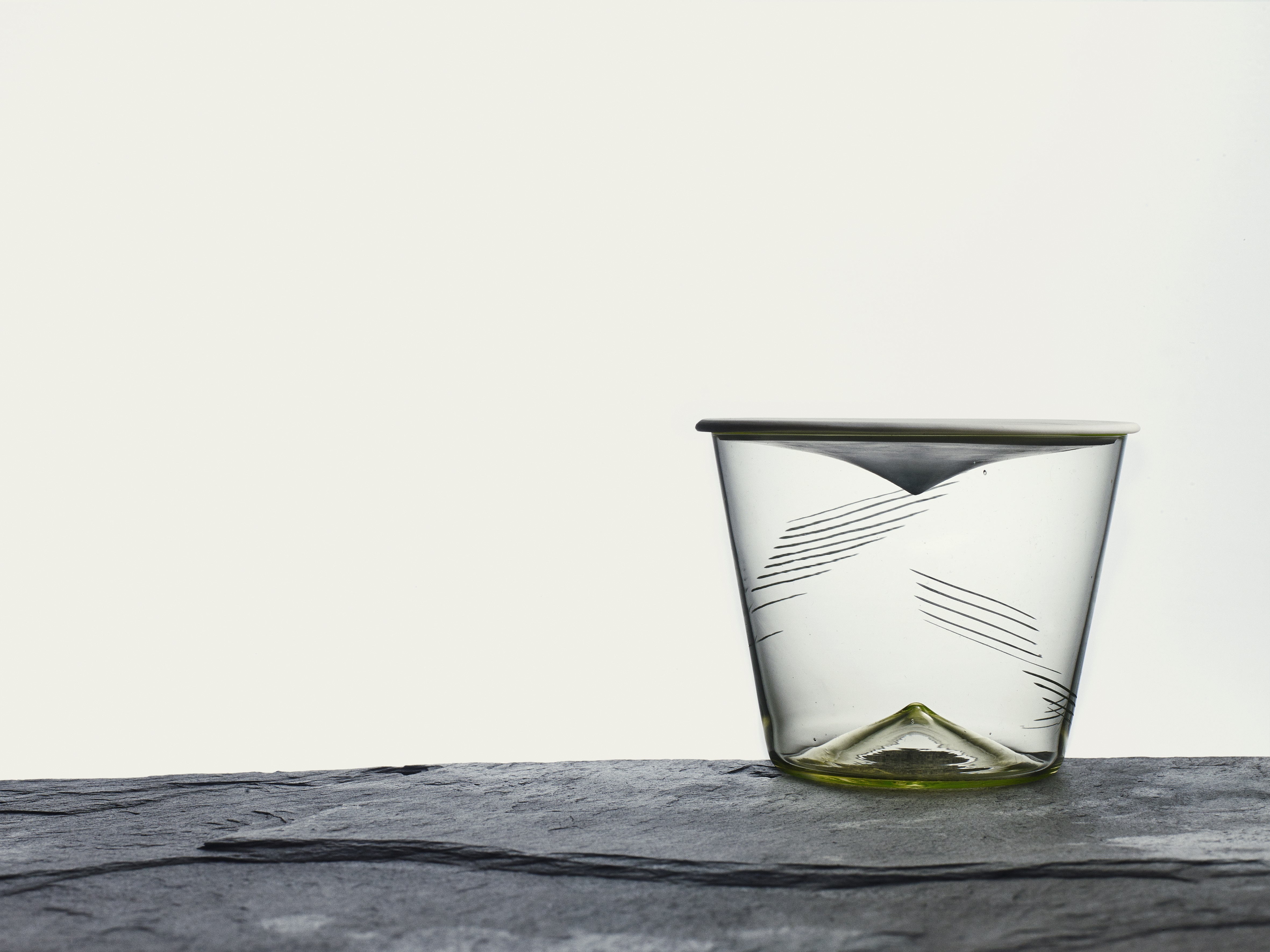 "I think emptiness stands for a certain state of mind. An experience. Neither silence nor an empty spaces are real."

At the same time, I see a certain relationship with the two contradictory (yet still intertwined) elements in your work. On two particular vases in your exhibition, you engraved words, haikus by Macuo Basho. Elsewhere, you use words from Bible as an important element in your work on windows for the church in Petrovice. I wonder how you perceive this oscillation between words and silence. Between sound and its absence.
In haiku, I am interested in the birth of an idea in the form of words. Haiku is primarily about our perception and the thought, that haiku gives birth to, is a thought of our world; it is not an absolute permanence, rather, it is absolute in our mind at the time it exists. In Petrovice, I used only two words. Working with the dispositions of the windows, I wanted to tie them to the Script. These pieces are set in the walls of a church and thus a place made for contemplation, thinking about things that transcend our life, while simultaneously connecting them to it. The East window talks of the Origin, the West of the End. I wanted the words to be revealed only during a specific time of the day, by a specific angle of light – thus opening possibilities of individual readings. Everyone, in contemplation of what is written on the windows (Let there be in the shape of Alpha, I shall come for Omega), can interpret these words on their own.

To a certain degree, this balance can be traced within all your work – areas with meaning, be it abstract patterns or engravings, alternate with bigger spaces, where there is room for reflection. How do you perceive these inner dynamics? And how does word, as haiku and as sound and its absence, work within the grid of your work?
Professor Kopecký once wrote about me that I am clawing, through the scorched land of glass, groping… “Out of the dark and intuited, there suddenly spring a thought in the form of a finished piece”. I think he understood me perfectly. Often, at the beginning, I seldom know what the thing I’m doing is, or what its result is going to be. I am guided, step by step, towards my finish line, without knowing where it leads, only sensing it. Basho was a pilgrim, and so was Mácha, they discovered their words on their way. Much in the same way, I have to begin somehow first, make the initial step. On my way, I find new thoughts, new ideas, or simply understand the old ones. One could even say that without spaces for contemplation, we are all lost.