Designers and objects which can control human muscles

A tin, the design of which will force you to shake it before using. A dancer´s  body controlled by a power source independent of her will. A navigation system which manages your steps. These and many more achievements of our civilization indicate new dimensions of coexistence of humans with technology. 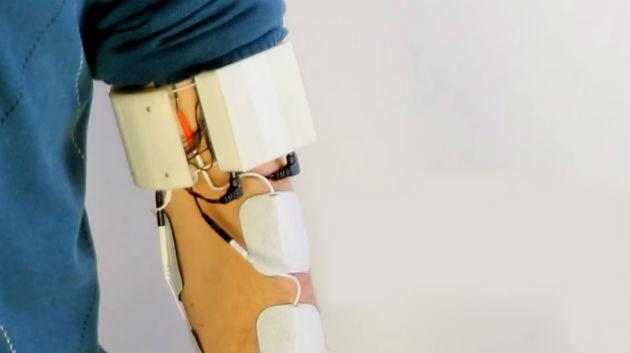 Scientist and artist Pedro Lopes dedicated his professional life to the development of interfaces used for communication between technical devices and the human body. His devices send electrical impulses to the muscles, allowing the players in a game physically feel the hit from the opponent and react immediately.

We have known the EMS (Electrical Muscle Stimulation) method since the 50s, when athletes started their first experiments. Given that even a human muscle works basically on the basis of electric pulses, it is possible to tense them up by a signal from outside. This method of electrical stimulation of the muscles is normally used in rehabilitative medicine. The propriosensory interface that utilizes the ability of the nervous system to record changes occurring in muscles, allows pulses to both transmit and also capture reaction of the body and return them, for example, to a game.

Pedro Lopes is a University of Lisbon computer engineering graduate. He now works as an assistant professor in the laboratory Human Computer Interaction Lab at the Hasso Plattner Institute in Berlin. “It is not my goal to hack muscles. I´m not into creating a cyborg. My work is simply about purely scientific research of small interfaces which have no monitor and display nothing. They're called proprioceptive interfaces. They only have input in the form of data from measurements of muscle impulses which I get through sensors. The output is in the form of electrical stimulation of the muscles. When using my proprioceptive interface, you can look around or move and talk. This interface simply does not employ any other senses but your muscles,” explains Pedro Lopes.

A tin shakes itself. With your hands!
The project by Pedro Lopez is fascinating. It allows objects in the experiment directly communicate with people. More specifically, the communicator is a computer program. However, the result is that a cube, using the human hand, will throw itself where it "wants" to be. An unconventional door will open with the help of a hand, an avocado peeler will guide its user for the proper use and a can of spray paint will force you to shake it well first before use. "The goal of the experiment is to show that you can improve the way you use objects just by teaching them to communicate," says Pedro. "Our interface offers a very elegant way of doing this - imagine that you can revive millions of objects just by providing the user with a simple bracelet." Just amazing. "All interfaces are completely safe for the human body, we use medical equipment attested for example for rehabilitation," he adds. Those in doubt can try it themselves. The necessary codes and instructions are available from the online repository GitHub. 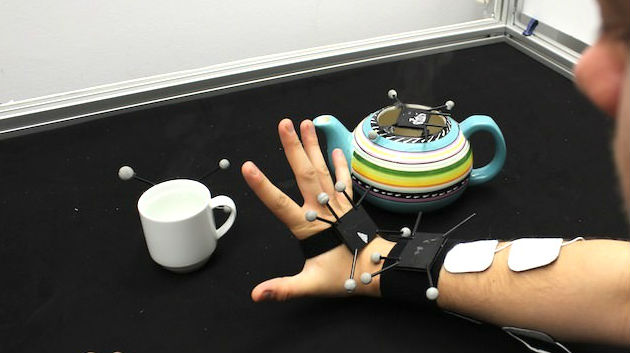 What if your hand is not allowed to touch hot cup?

One of the videos from the laboratory, where Lopes works together with his colleagues, shows Pose - IO device moving researcher’s  hands.

Another video shows how to use an interface to the computer game, such as, for example, a virtual booth.

It walks on its own
Now imagine that you have a navigation system, which allows you to roam the streets freely reading a book or using your smartphone without bumping your head on the street light or being hit by a car. A pedestrian navigation, developed by five scientists from German universities in Hanover, Stuttgart and Munich (Max Pfeiffer, Tim Dunte, Stefan Schneeegass, Florian Alt and Michael Rohs), can do all this. "Most people currently use some sort of navigation equipment. The usual ones based on audio-visual navigation are rather useless. The user may miss or wrongly interpret information received. Furthermore, it burdens his senses.

The authors say: “Our device sends the user in the appropriate direction through electrical signals transmitted to his thigh muscles. The final choice is up to the pedestrians; they may follow the signals or ignore them. We believe that pedestrian navigation through EMS will have its future. A prototype of our device works only if connected to a standard navigation, which you have in your mobile phone. "It is possible, that in the future the EMS navigation interface will communicate with more sophisticated navigation devices that will be able to work with detailed 3D maps and continually evaluate shocks and tactile perception of the user. It will simply walk the streets alone.

Are modern facilities and systems of benefit, or do they behave a bit like parasites?
An interactive performance called Body(input) this to answer this question. It premiered in 2014 In Prague.  The Body(input) uses metaphors to play with digital data and their potential use for the human body. Body functions of a dancer and choreographer Markéta Kuttnerová get detected by sensors while she is dancing and the data are transmitted to a computer. Light on the stage in turn responds to her breathing, heart and muscle activity, but sometimes it works independently of them. The dancer herself can, based on the light discharges, change her choreography. The author of the performance concept and lighting design is Márie Júdová, a designer, hardware and software was provided by Andrej Boleslavský, a new media artist and designer. 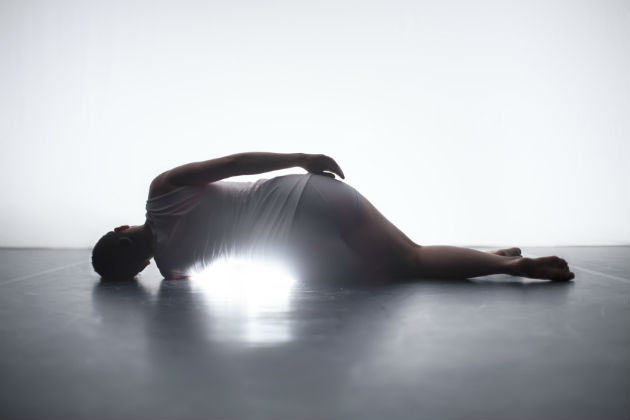 Yet another performance, Tenze, also depicts relationship of the body and technology. This piece by Markéta Kuttnerová and dancer Jana Vrána premiered in 2013 in the Prague´s  Ponec theatre. This time the artists used different technology and cooperated with Tomáš Suchan from the Prague´s hackerspace called Brmlab: "The dancer´s muscles are connected to electrodes of a multi-channel programmable generator of stimulating electrical impulses. The device is designed to emit pulses which are not too high and cannot damage muscles or nerves," explained Tomáš Suchan.

During the performance, the choreographer holds a box in her hand through which she controls the dancer´s movements. Unlike the projects of the above mentioned Pedro Lopes, Tomáš Suchan uses a method called TENS (Transcutaneous Electrical Nerve Stimulation), in which impulses irritate the nerve tissue in the muscles directly. In healthcare, this method is used mainly to work with uncontrollable muscles which cannot be controlled by will and also in treatment of chronic pain. The performance addresses the question of to what extent we can directly influence human movement, "hack" or manipulate the human body without employing the brain. To which extent do we act based on our own free will and to which extent are we just puppets connected to the power source? "I am connected to a source, which guides and determines the origin, quality and progress of my arm´s movements. They live on their own – I do not control them anymore. I can move in space, but also become a puppet for which the device is the place where the motion pulse originates from and which simultaneously determines its limits," says the text to the Tenze performance.