Glass artist Jan Frydrych said the most important things right up front during our brief meeting. Prior to the start of an exhibition of his works, and standing amidst a number of installed sculptures, Frydrych observed: “It is seeing across five axes.” These days, modern technologies and appliances can boast of 3D vision and modelling capabilities. But this is far from sufficient for an artist like Frydrych. “Opticality” (Optikalita), showcasing the works of Jan Frydrych, is the first ever exhibition of optical glass art organised by Galerie Kuzebauch. The event runs until July 12, 2019. 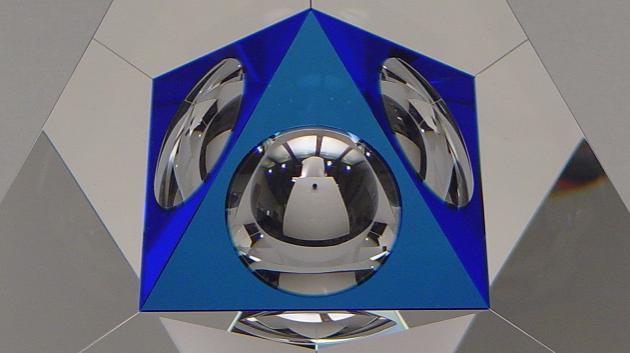 “There is a cut of only 6cm, but you see 36cm,” says Jan Frydrych of his “penta-axial” way of seeing. Does the Czech glass artist really possess some kind of extra-sensory perception? Naturally, many painters and other artists often possess excellent capabilities in terms of seeing that which remains invisible to us mere mortals. Or is it rather a complex ability to imagine the final appearance of an envisaged work – both in its individual components, and in the finished whole – before such a work has even been created? Or perhaps it is a matter of emotions, such as when a particular dancer performs in a manner different from the rest, because they hear a different beat... The evidently mind-reading Jan Frydrych immediately adds: “It is a certain kind of internal seeing. It’s akin to a deaf music composer still being able to compose, because their internal ability to ‘hear music’ still functions. I only produce intimate works – that is something that suits me – I don’t try to create any kind of monumentality. I stay within my own lane.”

Despite such claims, a degree of monumentality is certainly present in the works of Jan Frydrych, albeit without spanning tens of metres in size. The artist’s vision is primarily oriented towards working with architecture and light. These two facets may be viewed as fundamental to any kind of glass art, but even Václav Cigler, Ivo Rozsypal, Ilja Bílek and others in the field working primarily with the geometry of the sculpture have not attained such an effective interplay between depth and perspective as Jan Frydrych. Despite stemming from simple shapes, such as pyramids, discs, spheres, hemispheres, cubes, towers, tetrahedrons and a variety of symmetric and asymmetric polygons, the glass artist’s works are also further divided via regular and irregular interventions, cuts, concave and convex hemispheres, and rounded shapes integrated within sharp forms and vice-versa. All of this then yields a kind of “Cubistic” set of alterations and an accumulation of perspectives of the individual components. 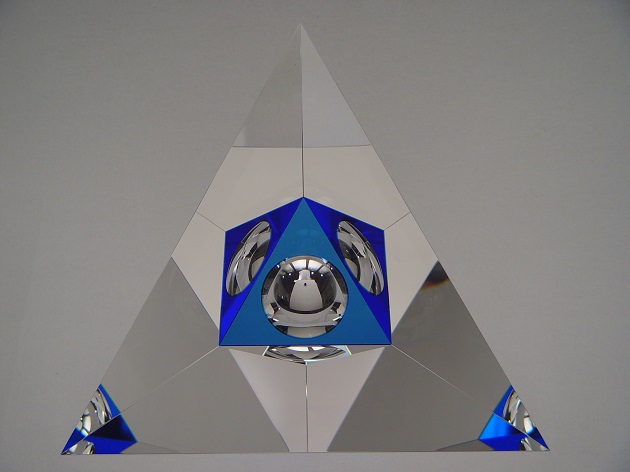 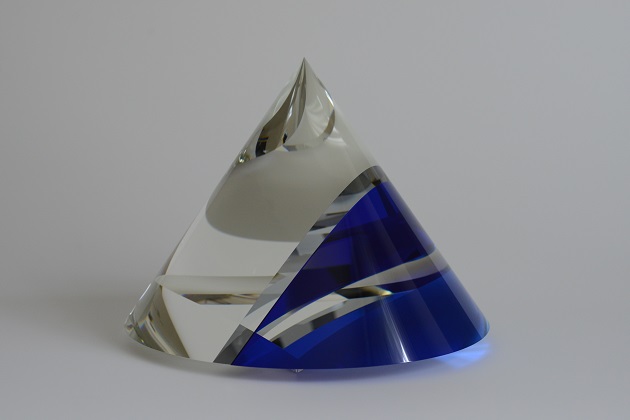 No matter from which angle one observes a piece – from above, below, from the sides – it is consistently changing; both the saturation and the gentle shades of a single colour, which suddenly darkens or disappears completely. The passage of light, its refraction at the point where the glass is cut, and the reflections that disperse invisible rays of light to another place – all of this multiplies the sparkle of this optical glass and transforms the internal structure of the work. In old-fashioned terminology, one might say that the work represents a “play on light”; but these days, it is considered more modern to talk of “light design”, albeit one that does not require a computer, mini motor, or projector. Rather, this form of design represents the first “substance” with which the author works, only to later ensnare it into the body of a sculpture. Much takes place internally, and much on the outer surface, the latter being akin to a transparent magical coat, of which we only become aware through the reflections of its surroundings or the movement of passers-by. This interplay deceives the eyes, but also gives a soul and sense of life to these small static monuments, which never fail to be different and surprising; nothing can be added or even taken away from them.

It is impossible to ignore that fact that asides from a sparkling sense of clarity, another facet elevating Frydrych’s works towards ethereal heavenly sensibilities is the presence of the colour blue. “I went through and experimented with all possible colours. I came to like blue because it contains within it all the other colours of the colour spectrum. It enables the creation of a rainbow-like spectrum of light; it also ‘colours itself’, thus offering an inexhaustible number of shades. At the same time, it leaves space for one’s own fantasy.” 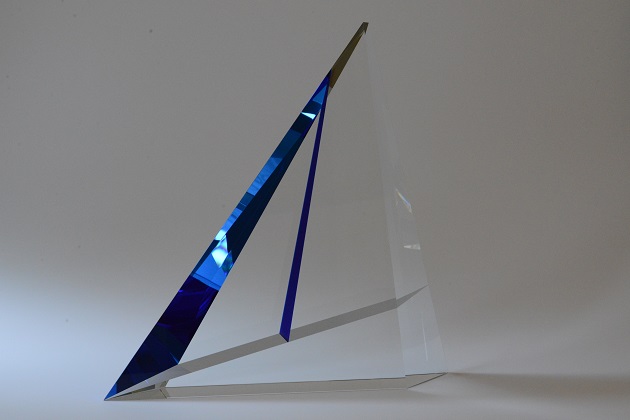 Jan Frydrych does not come from an artistic family. His own early dreams were centred on becoming a professional photographer. However, a visit to the glass school in Nový Bor, at which his sister – the only one in the family hitherto involved in the arts – was studying the field of glass painting, helped chart a new future course. And it is at this school that Jan Frydrych ultimately gained an education in glassmaking, followed by further studies at Liberec Grammar School and the Pedagogical Faculty in the city of Ústí nad Labem. Frydrych went on to become a prominent glass cutter and key figure assisting in the realisation of works by Professor Václav Cigler, a noted artist who began experimenting with optical glass back in the 1970s. Frydrych also ended up working with other key figures from this generation of globally acclaimed Czech glass artists, including: František Vízner, René Roubíček, Ivo Rosypal, Bořek Šípek and many others. He also partook in numerous architecture-related projects, and also worked as a teacher in schools in Japan, France, and in the US. Since the 1980s, Frydrych has exhibited his works across Europe, North America and the Middle East.

During the long period when Jan Frydrych worked for others, he gradually cultivated his own views and concepts on the subject of how artworks should look and what they should offer to observers. Albeit, the artist who helped cut so many other works, is not one to polemicise about such matters. Rather, he now simply sees things his way. This upward journey from a “manual” craft to the realms of artistic creation is remarkable in that Frydrych is entirely unlimited in his artistic imagination by the possible baggage of his unquestionable talents as a craftsman – rather, in the best possible sense, he has transcended these talents in order to aim for higher horizons. 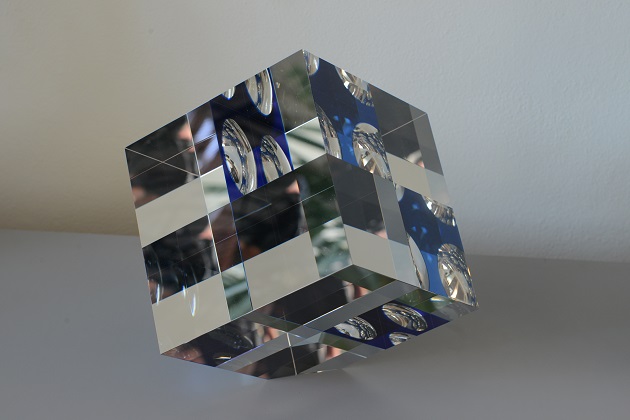 Unlike with photographs, which can be altered via a number of existing presets during the post-production phase – not just physically, but in the sense of their atmosphere and final meaning – Frydrych’s sculptures are uninterested in the mood and emotions of the observer, but instead serve as pure essences of intellectual exhilaration – a sensation known by every mathematician upon finding a solution that is both clever and elegant. A talent for mathematics, and the principles of mathematical geometry, are certainly evident in Jan Frydrych and his works, which offer a combination of precise form, artistic vision, and expert craftsmanship – all combining to create a distinctive signature for this particular artist. But it is minimalism? Or is it maximalism? In the case of Jan Frydrych, both possibilities can apply equally – a minimum in terms of utilised basic resources (glass, cutting, a single colour...), and a maximum in terms of attained final impact.

In the same way that it is often said that German cars are so impeccably designed that the only thing that ruins them is the drivers themselves, Frydrych’s optical glass sculptures are less effective when surrounded by too many people. In order to offer the best possible interplay of elements and refraction of light, each of the artist’s works demands envelopment in a neutral, empty backing from all sides. Light and the occasional movement of a visitor are mere phantoms from the real world, darting by along the surface before once again disappearing, leaving behind a fleeting moment. Which is why it is best to find oneself alone with such works. A person saunters by, wanting to enjoy these artefacts only for themselves, which is a laughable concept, because it seems that these refined sculptures have even ceased to belong to their author. Seemingly, these works have de-anchored themselves from him, and instead become both independent beings with their own language and mission, and also energetic conductors able to link up with other worlds – all possible thanks to an insistent sense evoked by technical precision, an ability to sparkle, and a coolness that we primarily associate with cosmic vessels, walkers, and communicators. After all, optical glass was primarily developed for astronomical purposes. 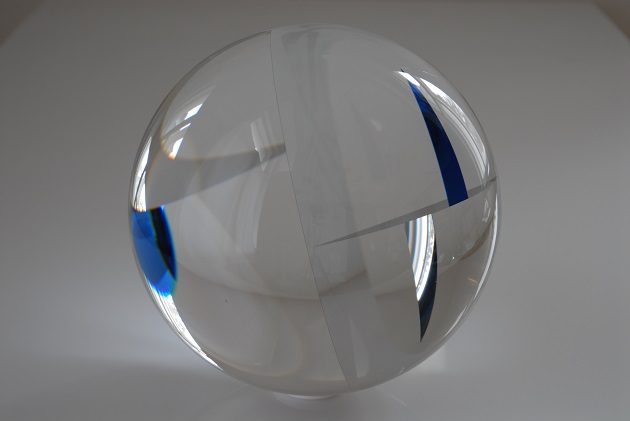 In a contemporary world of science and social networks, artistry and artworks serve as the last preserve in which the magic of artistic creation, and the intuition and individuality of artists, continue to exist as the highest possible ideals. Is it the case that artists know themselves and derive their work in equilibrium with their own beings – or conversely, that artistic works can serve as the most precise manifestations of an artist’s personality, despite an entirely different outward personality perceived by others and even the artists themselves?

Jan Frydrych has resolved this conundrum. He views his own glass art sculptures as models; manifestations that illustrate how he thinks and perceives the world of artistry. “I add stories into basic geometric shapes. They are small structures that emerge with the aid of optical glass, colours, and light, which is unusual, because regular materials such as stone, wood or bronze only enable work with the form, but no-one can look inside. I am able to add something inside that would otherwise not be there. That is all. After moulding the basic shape, I only cut the finer details of the overall shape using ever-finer abrasive materials until I attain the smallest structure. Only through cutting and polishing do the optics open up and we are able to see that which I have been seeking – that which is inside...” 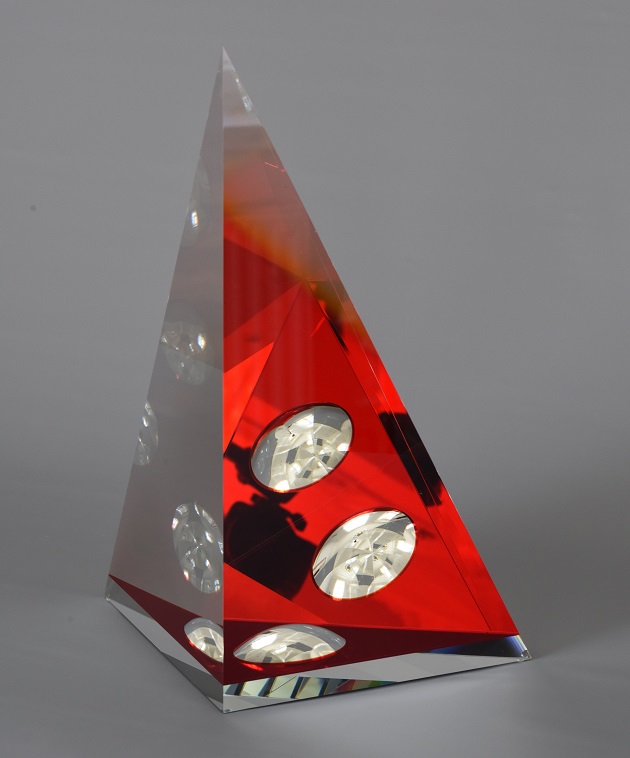 Jan Frydrych’s affinity for the colour blue has already been noted. But occasionally a different colour can be found in some of his works, namely red. It is a bold, rich and distinctive form of red that serves to ceremonially mark the passing of another decade of the artist’s work in the field. And a sculpture featuring red does indeed feature in the “Opticality” exhibition, meaning that, if tradition holds, it should hark something new to come from the artist. And because past is prologue, there is little doubt that Frydrych’s newest direction will prove to be as exciting as the works he has hitherto produced.