Czech literary historian Dr. Petr Holman passed away on Sunday August 4, 2019 at the age of 68. Asides from literary history, Holman was also an author, editor, teacher, Czech language and literature expert lecturing at universities in the US and India, India expert, musician, traveller, fan of Japanese ceramics, and a lover of teas and pipes. 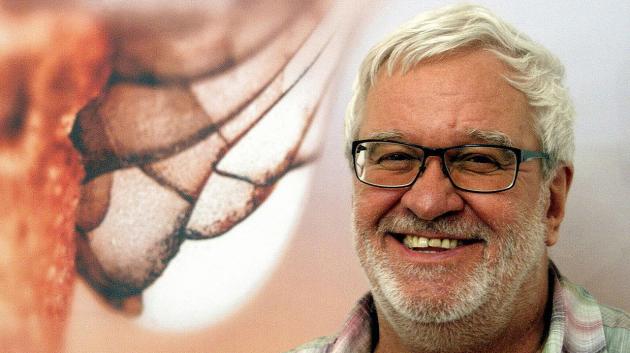 Apart from his voluminous publishing activities, Petr Holman also worked as a researcher at the Department of South and Central Asia at the Charles University Faculty of Arts. In terms of literary history and mathematical linguistics, Holman focused on Czech late 19th and early 20th century literature, ultimately making the work of Czech poet Otokar Březina (1868-1929) his prime focus. In 2016, he was awarded the Tom Stoppard prize for his book Březiniana II, the culmination of collection of Holman’s studies of the works of Otokar Březina. Holman was also the recipient of the 2005 Magnesia Litera award for his publishing activities.

Petr Holman was born in Prague in 1951. After studying at elementary schools in the northern Bohemian towns of Malá Skála and Železný Brod, he went on to study at a grammar school in nearby Jablonec nad Nisou (1966–1969). In 1969, he began to study Sanskrit at the Prague Language School, before studying Czech languages, musicology and India Studies (Sanskrit and Tamil – from 1973) at Charles University. He defended his thesis in 1973. Holman gained his doctorate in 1991, via the work Frekvenční slovník básnického díla Otokara Březiny (Frequency Glossary of the Poetic Works of Otokar Březina); this six volume glossary of the poet’s works exists as a notable sole attempt to interpret poetic language through the use of mathematical linguistics.

Following the Velvet Revolution, Holman made use of new travel opportunities, undertaking a research fellowship at Oxford University. Subsequently, he worked as an expert assistant at the Department of Czech and Slovakian literature at the Charles University Faculty of Arts (1991–1993). Additionally, from 1992–1994, Holman served as a visiting scholar via the Fulbright Visiting Scholar Program, teaching Czech language and literature at Stanford University and Northwestern University in the US. In 1995, Holman began working at the Institute for Czech Literature at the Czech Academy of Sciences. From 1996–1998 Holman worked as a teacher at the University of Delhi in India. Working in conjunction with Ivan M. Havel and Charles University’s Centre for Theoretical Studies in Prague, Holman assisted in teaching students from American and Canadian Slavonic Studies summer schools in the Czech capital. Holman also served as the honorary chairman of the Otokar Březina Society, himself being a holder of its gold memorial medal award, as well as being awarded the Anna Pammrová (Czech writer, feminist and philosopher 1860-1945) Society memorial award.

Petr Holman’s publishing activities were vast in scope. Notable works include Holman-edited Otokar Březina – Hudba pramenů a jiné eseje (Otokar Březina – The Music of Sources and Other Essays, 1989, 1996 expanded under the title Eseje/Essays), and Otokar Březina –  Korespondence I and II (Correspondence I and II, 2004). Holman also assisted with the Czech-Latin mirror language publication of Otokar Březina – Básnické spisy / Opera poetica (Poetry Collection/Opera Poetica, 2014). Additionally, Holman compiled a bibliography of Březina’s works, and edited numerous collections his works – all of which culminated with the publication of the monumental Březiniana II (2012) collection. Petr Holman also published a number of smaller editions containing letters by the 20th century Czech priest and author Jakub Deml (to Marie Tischlitzové, Marii Bačákové and others), and he also collaborated on  preparing an edition of mutual correspondence between Jakub Deml and Otokar Březina (2018).

In his self-authored Z cest (Travels, published 2005) Holman offered diary entries featuring comments and experiences from his travels during his stay in the US. Holman was also a contributor to numerous Czech magazines with titles such as Aluze, Bulletin Společnosti Otokara Březiny (The Otakar Březina Society Bulletin), Česká literatura (Czech Literature), Host, Kmen, Kurýr Odeonu, Literární měsíčník (Literary Monthly), Proglas, Typografia, and Umění a řemesla (Art and Crafts). He also contributed to the Železnobrodský zpravodaj (Železný Brod News Service), for which he had previously served as an editor. In recent years, Holman divided his time between working for our Prague-based Happy Materials, also contributing to the publication of its Material Times magazine.

Petr Holman was also highly active as an amateur and professional musician, playing the violin and viola in a number of music groups, performing in concerts both in the Czech Republic and across Europe. He also recorded a number of programmes for Czech Radio about Czech literature and Indian music.

It is clear that Petr Holman was more than simply a master of the written word. His opinions on social and political matters, and advocacy of responsible citizenship were also noteworthy. Although far from a political activist, Holman often shrugged off the risk of potential consequences while never shirking from saying out loud what others only thought but feared to express. As a result of this, during the communist era, Holman was forced to change employment on a number of occasions via the punitive actions of the regime – he served as a shop assistant, labourer, dishwasher, mailman, night security guard, boiler attendant, cleaner, proof-reader, tutor, Czech and singing teacher, and so on. Petr Holman knew no hate, but nor did he accept brushing off past questionable actions...

Openly, actively, and with an enlightened sense of oversight – that was how Holman would offer commentaries on the events unfolding in his midst. All the more so when he concluded that such events were pedestrian, or nonsensical, or even unjust. Despite resisting jumping into the ring of local politics, Holman remained a visible figure in the public sphere. Peter’s admirably indulgent understanding of the craziness of our world; his beamish, always effective and fitting, yet often highly critical, but never conceited, comments directed at those deserving of his sharp tongue, served as a kind of bullet-proof justification of his own opinions and world view.

Those fortunate enough to have met Petr Holman in person very quickly saw that this was a man not wasting his time waiting for anything. In his role as an indomitable supporter he was able to motivate and move people towards achieving their goals. Conversations with Pert Holman were characterised by many shades and colours – much like the ceramic bowls into which he would expertly brew tea – they would invariably strengthen and energise. His dogged enthusiasm cast the same fields of energy to those in his orbit. Now that he has passed, we hope to continue to source this energy through the sheer force of Pert Holman’s legacy.